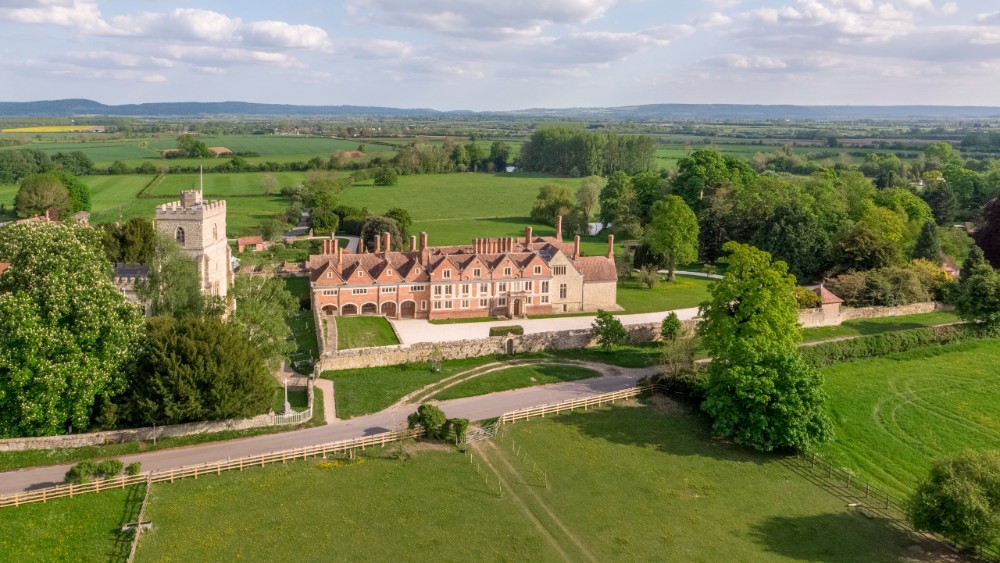 This once-in-a-generation property is like living in a museum.

Dinton Hall, a Grade II-listed building 50 miles outside of London, recently hit the market for $15 million after a decade-long, $12 million renovation by the current owner and seller, Richard Vanbergen. England might be full of centuries-old manors, palaces, and castles, but the history behind this property is exceptionally rare. The property itself dates back 1,000 years when it was first mentioned in an 11th-century survey of England, known as the “Domesday Book.” The property was a gift from William the Conqueror to his brother, Lord Ordo, Bishop of Bayeux, and changed hands and families several times.

It’s said that the manor was built in 1492 by Archbishop William Wareham. In 1604, Simon Mayne purchased the home. His son, also Simon, was a parliamentarian who, alongside other regicides, signed the death warrant of King Charles I. It’s said that he even hid in a secret chamber in this very home before he was found, imprisoned, and killed at the Tower of London. His body was eventually returned to Dinton Hall and buried in the church.

The architecturally significant ancient country house, as one might imagine, was rotting and falling apart in various parts and required a modern-day upgrade to protect it from rain, bugs, and other natural elements. However, original features do remain, including the two Jacobean-style staircases, 18th- and 19th-century paneling, fireplaces, 16th-century armorial glass, and some medieval English stained glass. Most of the outside walls; internal roof of the study (which used to be the chapel); internal doors; the front door; chimneys; and display cabinets have been painstakingly restored from the original structure.

Vanbergen was very cautious to honor the history of the home in any additional feature he installed.

“I designed many things that architects did not seem able to do, like wrought-iron gates designed in Kuala Lumpur; chandeliers and wall lights in ancient religious medieval style to reflect the connection to Bishop Wareham; fireplaces; and flooring,” Vanbergen tells Robb Report.

Other elements, like the mosaic in the walls of the kitchen, was inspired by the Bayeux Tapestry, created for William the Conqueror to justify his claim to the English crown. The Bayeux Tapestry currently resides in Normandy, France.

“It was created in a coarser style to represent the primitive stitching and cloth used in the original article,” he says.

Some other non-glamorous restorations included fixing the roofing, walls, flooring, air systems, and installing modern appliances. Vanbergen also had the garden landscaped to include flat spaces for croquet and helicopter landing. The on-property chapel still remains as well.

One of the nine bedrooms.  Douglas Elliman Realty/Knight Frank

The home comes with all fixtures and fittings, but the antique furniture and ornamental decor are available to purchase by a separate negotiation. The housekeeper and grounds people are also happy to stay on with the future owner.

The property sprawls over 46 acres, filled with gardens and ample parkland, which includes a pond with a bridge and gazebo. As for the 20,000-square-foot house, there are nine bedrooms, seven bathrooms, and eight living rooms, as well as a newly added indoor swimming pool, orangery, gym, and more. The home feels livable, warm, and comfortable and is ideal for those who love history and love to entertain.

One of the many living areas in the home.  Douglas Elliman Realty/Knight Frank

The home comes with two 17th-century artifacts dating back to the English Civil War. One artifact is a sword used by Oliver Cromwell in the Battle of Naseby and given to former owner Simon Mayne. The other is a shoe from John Bigg, a clerk at Dinton Hall who swung the executioner’s ax that beheaded Charles I. Bigg was known later in life as the ‘Dinton Hermit’ because he lived the rest of his days as a recluse in the home.

The property is co-listed by Douglas Elliman and Knight Frank.

The eaves rom, which features the gym, a piano, and a fireplace.  Douglas Elliman Realty/Knight Frank