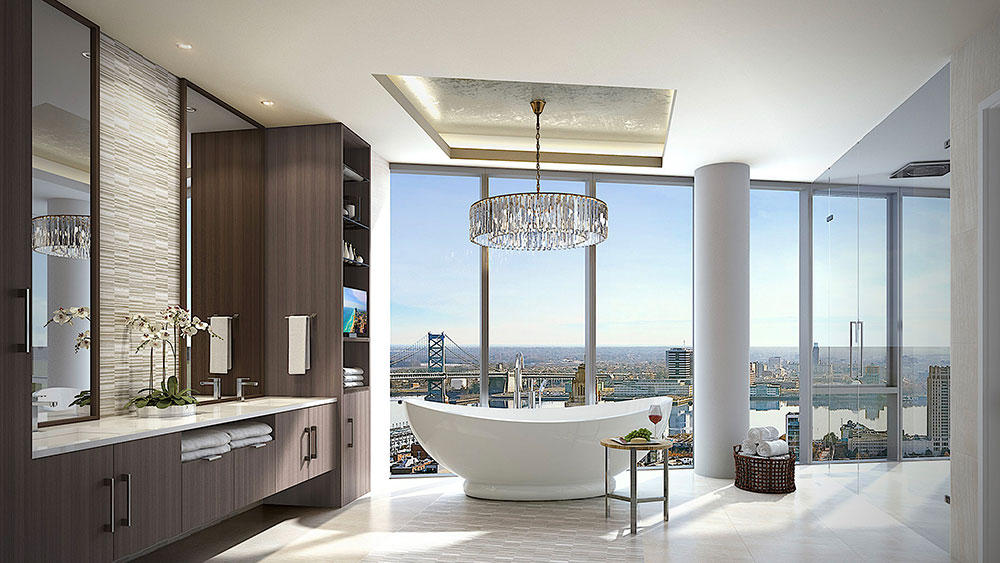 Here’s a tip for the sellers seeking an $32 million for the Penthouse at 500 Walnut in the heart of Philly, that City of Brotherly Love: Spread the rumor that Jay Z and Beyoncé are interested in buying.

It worked back in 2016 when this spectacular, 11,000-square-foot, mansion-in-the-sky was first listed for $17.8 million. Seems a local rumor-mongering realtor blogged that America’s power couple would be snapping-up the two-story palace.

Next thing you know, the internet went crazy spreading the news, and the penthouse, with its vast roof-top terrace, had sold—alas, not to Jay Z and Queen B—for $17 million.

At the time, the sale price shattered all records for the Philly property market. If it sells this time around for anywhere close to its asking, it’ll raise the bar yet again.

What’s the appeal? Where do we begin? For starters, there’s the vast 2,478-square-foot, private rooftop terrace atop the 26-floor building.

From there you can take in spectacular views of the city’s historic Independence Hall, the Liberty Bell Center, across to the Ben Franklin Bridge and lazy Delaware River. With its glass solarium, cozy gas firepit and outdoor kitchen, it’s a truly usable year-round space.

Inside the condo, within the roughly 8,400 square feet of interior space, there are three spacious bedrooms, four full baths, three half baths. The huge master features wrap-around, floor-to-ceiling windows.

Add to that a large living area with a built-in bar, a family room, spacious formal dining room with an adjoining catering kitchen, an eat-in kitchen with south and east-facing balconies, plus an office space, also with its own balcony.

And all three floors are connected by a grand, sculptural spiral staircase worthy of a 1920s Hollywood movie set. Or, if you don’t need the exercise, take the home’s private elevator.

If all this isn’t incredible enough, the amenities at 500 Walnut Tower are equally over-the-top.

Take parking. The building’s fully-automated robo system takes your car and parks it for you. Need it back? The system will retrieve it in 90 seconds or less. And with the Penthouse, you get no fewer than four parking spaces, along with cordless induction charging if a Tesla is part of your fleet.

The grand entryway with its sculptural staircase.  Photo: Courtesy of Scannepieco Development

And talking of Teslas, at 500 Walnut you don’t really need a car as the building has its own on-call Tesla “town car” and driver.

Designed by local architects Cecil Baker + Partners, this slender, glass-and-marble tower was developed by Philly-based Scannapieco Development Corp. and completed in 2017. SDC is also behind the city’s other super-luxe, condo tower, 1706 Rittenhouse.

Records show the Penthouse is currently owned by Infinite Views One, LLC which bought the unit in 2016 as an empty shell and seemingly spared no expense in its build-out. It’s being marketed with the help of the building’s developers.

The rooftop deck’s solarium can be used year round.  Photo: Courtesy of Scannepieco Development

The tower’s amenities include a lap pool, spa and fitness rooms.  Photo: Courtesy of Scannepieco Development