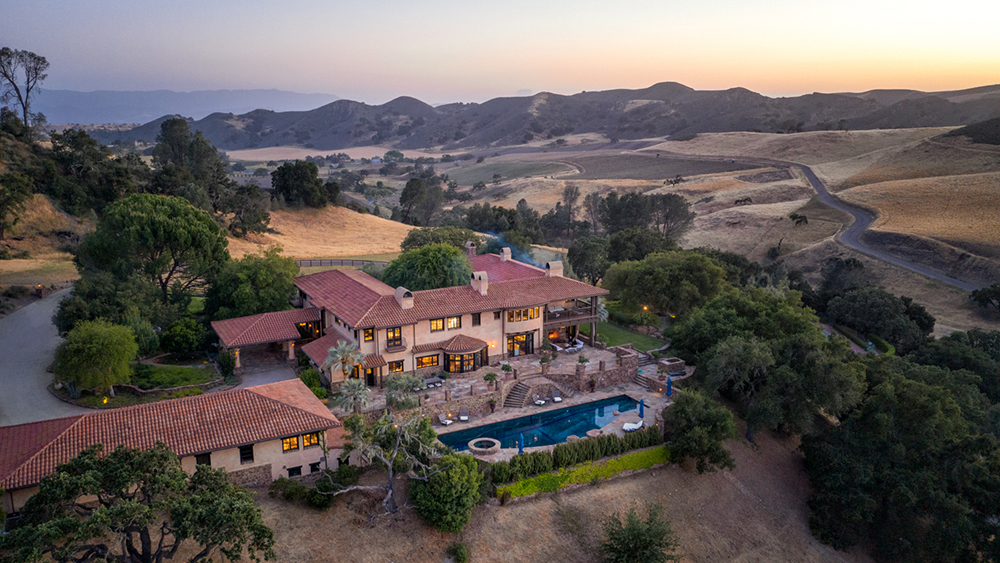 Seems not all investment bankers are out to make a killing in the market. Former Goldman Sachs partner Fred Steck has just re-listed his spectacular 4,700-acre cowboy ranch in the rolling hills of California’s Santa Ynez valley for $24.5 million.

That’s $20.5 million, or almost 50 percent, less than he was asking when his historic Rancho Latigo first hit the market in 2017.

A horse-lover’s dream, the ranch comes with a 10,000-square-foot, 11-stall barn, a 23,000-square-foot riding arena, seven acres of paddocks and eight miles of horse trails.

After a dusty day playing Billy Crystal in City Slickers, you can freshen-up inside the ranch’s nearly 14,000-square-foot, six-bedroom main house with its 10,000-bottle wine cellar, movie theater and swimming pool.

And when friends and family come to stay—they can arrive in style at the ranch’s helipad—there’s a spacious three-bedroom guest cottage close to the stable.

“This is a once-in-a-lifetime opportunity to own an incredibly private trophy property that offers the respite and tranquility of a luxury resort within a few miles of Santa Barbara,” says Aaron Kirman, with Aaron Kirman Group at Compass . He and colleagues Neyshia Go and Hillary Ryan share the listing.

Steck, who was with Goldman Sachs for 25 years before retiring in 2008, bought the ranch for a reported $10 million in 1999. “When I was five years old, I wanted to be a cowboy. I could never quite get over that,” he told Architectural Digest for a 2009 feature on the property.

With the help of renowned Seattle-based ranch architect David Leavengood, he spent four years and a small fortune building the main house from a design inspired by Spanish Colonial-style haciendas found in South America.

The ranch was constructed to look like a Spanish hacienda.  Photo: Juwan Li/Aaron Kirman Group

Constructed around a shady central courtyard with an ornate fountain, the two-story home with basement features barrel-tile roofs, a multitude of chimneys and plenty of covered terraces.

Inside there are six bedrooms, 11 bathrooms and no fewer than 27 rooms—Steck preferred spaces that were small and cozy rather than grand and open. To add an authentic feel, he brought in local craftsmen to install reclaimed railroad trestles for beams and rough-hewn stone for floors and fireplaces.

Arguably the grandest room is the entryway with its wide, curving staircase and elegant wrought-iron balustrade. Steps lead down to the home’s lower level with its eight-seat movie theater and wood-lined wine cellar and tasting room.

The open-plan family room features a small but well-equipped kitchen with top-of-the-line appliances, like a French-made Lacanche cooking range, Sub-Zero fridge and freezer, Miele dishwasher and a pizza oven

A keen environmentalist, Steck also spent more than nine years overseeing the restoration of the ranch’s 4,700 acres that had suffered from decades of over-grazing and lack of care. Streams were cleaned up, unused roads removed and re-seeded, and invasive plants dug up.

The father of five, who was famously once married to The Woman in Red actor and supermodel Kelly LeBrock, says that with his family grown and moved on, it’s time for someone else to enjoy the ranch.

As to that 46 percent price cut, Steck told Forbes: “We’ve priced it at a level to say that we’re motivated to sell. We’re trying to offer a real value proposition.”

Certainly don’t expect any horse-trading with the deal.

One of the bedrooms.  Photo: Juwan Li/Aaron Kirman Group

One of the home’s 11 bathrooms.  Photo: Juwan Li/Aaron Kirman Group

One of the six bedrooms.  Photo: Juwan Li/Aaron Kirman Group