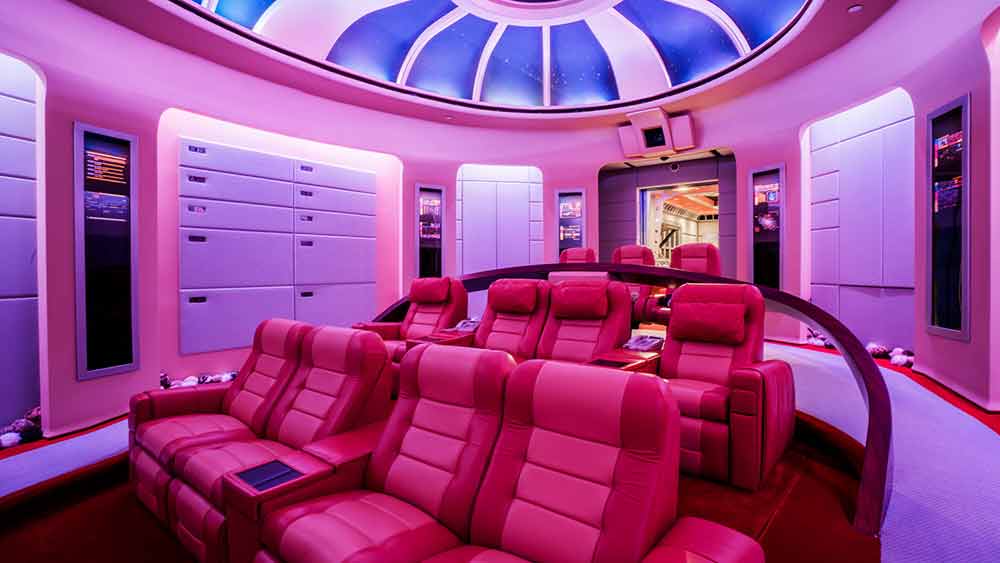 Sorry, Leonard Nimoy’s elongated Spock ears don’t come with the house. Nor does the life-sized Robby the Robot from Lost in Space. That rather scary Borg model and the vast collection of model Enterprise spaceships? Don’t even ask.

No, when Marc Bell, hard-charging venture capitalist, Tony-winning Broadway producer and life-long Trekkie finally finds a buyer for his sprawling $25 million mansion in Boca Raton, Fla., he’s taking his vast collection of sci-fi memorabilia with him.

The good news? His jaw-dropping Star Trek-themed movie theater with vibrating floor, 3D surround-sound system, 10-foot screen, and replica of the Enterprise bridge to operate it all, stays. But it’s up to the new buyer whether to keep the purple walls and cranberry leather upholstery.

Finding that right buyer hasn’t proven easy. Bell, who at age 21 founded the web-hosting company that became Globix Corp, put his 27,000-square-foot home on the market back in 2014 for $35 million. In 2017 it was re-listed at $29 million. Now it’s being offered, with some keen financing incentives, for $24.99 million.

“It has been a blast to live here,” Bell tells us. “It’s a house built for entertaining – we still do monthly fund-raisers here for different charities, and we can have as many as a thousand people for dinner.”

But with his kids grown and now living in New York, and he and wife Jennifer having moved to a new home in Miami Beach, he’s keen to sell. “You don’t have to be a Star Trek fan to live here, but it would be a definite plus,” says the former owner of Penthouse magazine.

The home is located in the gated community of Princeton Estates, which sits within Boca Raton’s exclusive Woodfield Country Club (membership limited to 425). Built in 2005, it took four years to complete and comes with nine bedrooms, 16 bathrooms and its own helipad.

While the home will be sold empty, right now it is a true geek’s paradise. Take the massive 55- by 40-foot arcade room crammed with 60-plus classic arcade games—from pinball machines, to foosball, to air hockey to Bell’s favorite, Atari Football.

A nearby video gaming room is decorated to look like a World War II bunker, with camouflage netting on the ceiling, sand bags and ammo cases for makeshift seating and barrack-like bunk beds for sleepovers.

For his kids’ bedrooms, the fictional fantasy continues: one has a fairy-tale castle theme with whimsical hand-painted murals, another a pirate’s lair with desert island scenes and a wooden pirate ship for a desk.

But it’s the Star Trek movie theater that’s Marc Bell’s favorite. The room, with armchair seating for 11, took four years to complete and would likely cost $1-million-plus to duplicate.

You enter from an adjoining Star Trek-themed bar—on’t miss Bell’s prized Spock ears in a case—and boldly go through doors that whoosh open, just like those on the Enterprise. Look up at the ceiling and fiber optics create a galaxy of twinkly stars.

“Whether you’re watching a Star Trek movie or not, there’s no more fun place to watch a film. It’s a great space,” he says.