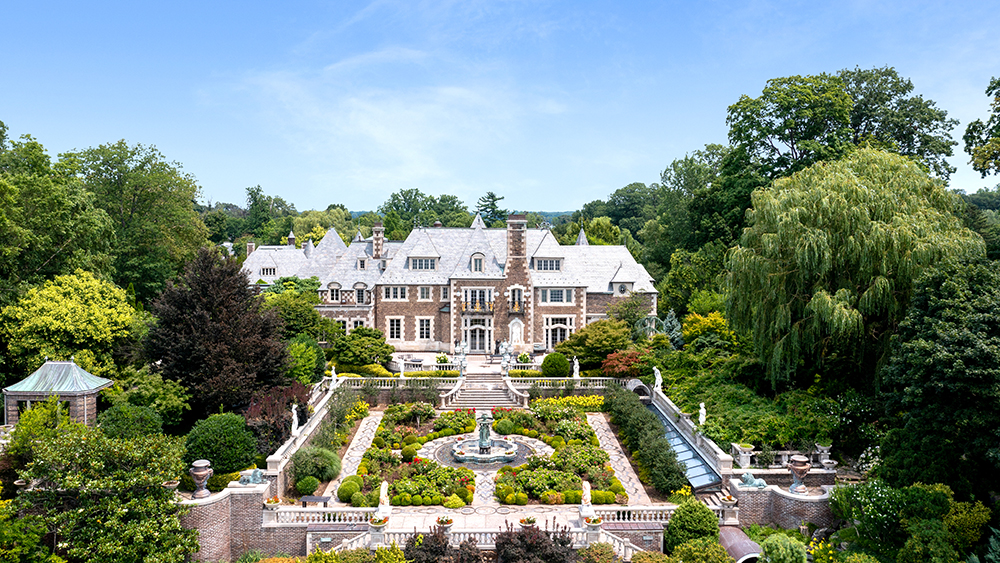 It could have come straight off the pages of F. Scott Fitzgerald’s masterpiece The Great Gatsby. Now listed for $55 million, this Roaring Twenties compound on New York’s fabled Long Island Gold Coast has everything the dapper namesake of that story could ever desire.

Built in 1928, the eight-acre, three-home estate known as Three Bridges overlooks Long Island Sound and features 18 bedrooms and 32 bathrooms in an astonishing 60,000 square feet of interior space. Among the maize of rooms, you’ll find a lavish ballroom, a dining room lined in purple lapis with an ornate colored-glass ceiling, and dazzling living spaces.

The home is replete with marble and other flourishes.  Photo: Morgan Rothblat/Daniel Gale Sotheby’s International Realty

The place is clearly made for a life of leisure: There’s a full-size tennis court, marble-lined screening room, two-lane bowling alley, hair salon, wine vault, indoor racquetball court, casino room and even a shooting range. Kids, meanwhile, can have the run of a two-story, Greek temple-style dollhouse that’s as big as many Manhattan apartments. For lazy days sailing on the Sound, the estate comes with its own private dock big enough to park a 200-foot superyacht. A huge outdoor swimming pool juts majestically out into the water and has its own water slide and colorful marble floor.

Gatsby would no doubt relish impressing guests with the property’s dramatic, illuminated fountains and statues, which are said to have been inspired by those at the Peterhof Grand Palace in St. Petersburg. This Russian touch most likely came from the estate’s most famous owner, the Russian-born former New York cab driver turned billionaire, Tamir Sapir. Mr. Sapir, who died in 2014, made his fortune in New York real estate during the 1990s. He once owned the magnificent Beaux-Art-style Duke-Semans Mansion on Fifth Avenue, selling it to Mexican telecom billionaire Carlos Slim in 2010 for $40 million.

What’s a little confusing to real estate watchers is that Three Bridges sold back in 2013, a year before Mr. Sapir’s death, for what seems like a fire-sale $15.85 million. Especially as, just a year later, the buyer–whose identity is shielded by an LLC and who apparently never moved in to the home–re-listed the property after some restoration work for an unthinkable $100 million. Since then, with no takers, the price has steadily come down—to $85 million in 2019, and $70 million more recently. After being withdrawn from the market, it has now been re-listed with broker Jason Friedman, of Daniel Gale Sotheby’s International Realty, for a more attractive $55 million.

“This is truly a one-of-a-kind property that, we’re told, would today cost between $200 million and $250 million to recreate. It is so rare to find a true compound containing three separate mansions in their own right, and in such an iconic location,” Friedman tells Robb Report.

Gates off Pond Lane—a short stroll from the Great Neck home where Scott and Zelda Fitzgerald actually lived in the 1920s—open on to dramatic, twin parallel driveways that lead up to the home’s spectacular entry, with its pair of gold-encrusted doors. Halfway along the driveway are two turreted guest “cottages”, while close to the main house is a two-story garage big enough to accommodate nine cars. As the Three Bridges name suggests, the main house boasts commanding views across Long Island Sound to the Throgs Neck, Bronx-Whitestone and Robert F. Kennedy Bridges, with the unmistakable Manhattan skyline off in the distance.

Without doubt one of the main house’s most polarizing, and over-the-top, aspects is its generous use of ornate marble, together with onyx, lapis, agate and malachite stone. The basement level spa, for example, features mind-numbingly-intricate inlays of tropical fish, giraffes and rhinos, along with colorful, complex mosaic walls and floors.

Word has it that the home’s striking interiors provided the inspiration for director Baz Luhrmann when he was working on his 2013 adaption of The Great Gatsby, starring Leonardo DiCaprio. Seems the movie’s set designers used interior photography of Three Bridges as the starting point to create interior film sets.

As for holding your own Gatsby-themed parties at this sprawling mansion? Surely worth every cent of the $55 million.