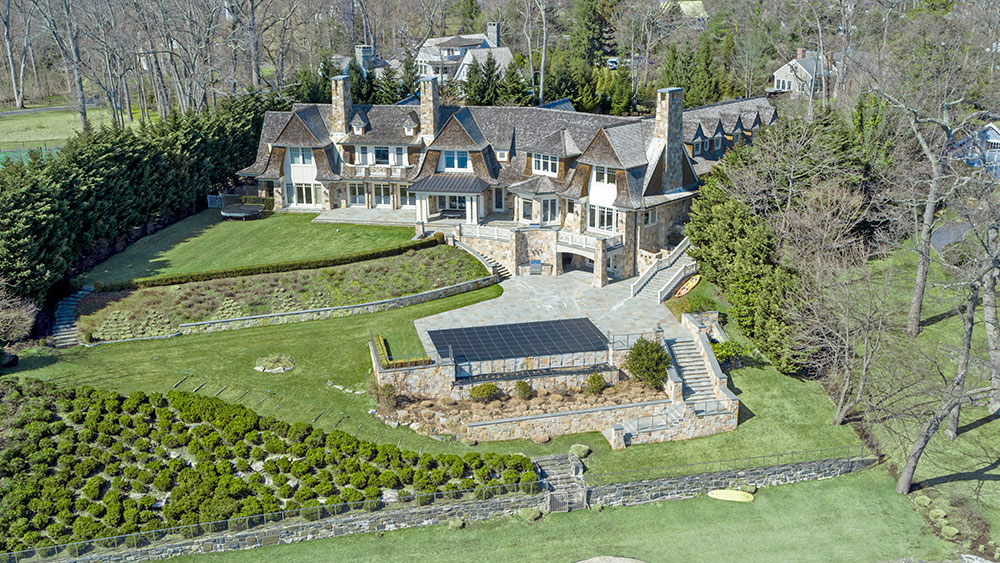 It was portrayed as the lavish Greenwich, Conn. home of billionaire hedge-fund king Bobby Axelrod, played by fiery-haired thespian Damian Lewis. Well, at least in a couple of aerial shots.

In real life, this 11,365-square-foot estate in tony Riverside, Conn. has been the long-term residence of media titan Tim Armstrong, the former Google ads chief, AOL CEO and founder of direct-to-customer digital start-up, the dtx company.

After 11 years and a couple of big pay days later, Armstrong, 49, who took home a reported $60 million when he departed AOL, is selling this shingle-and-stone masterpiece. Yours for $26.7 million.

The estate sits on an elevated, wooded and manicured 2.2-acre lot at the end of coveted Meadow Road, jogging distance from quaint Old Greenwich. From pretty much every window there are water views of Greenwich Cove, Tod’s Point and across to the Long Island Sound.

According to records, Armstrong and his wife Nancy, bought the lot in 2008 for $10.4 million and spent many more millions creating their custom dream home.

Designed by acclaimed local architects Shope Reno Wharton, it features a gorgeous L-shaped layout. Overlooking the water is the stunning two-story main house with pitched shingle roofs and stately chimneys. Adjoining it is a long carriage house with a row of six, too-cute dormer windows.

Inside, the mansion has six bedrooms, and seven-and-a-half bathrooms, a formal dining room, fireplaced living room and a spectacular, open, eat-in kitchen with industrial-grade appliances and a huge central island.

Sabag explains that one of Nancy Armstrong’s design requests was that the kitchen should look just like the one in the 2003 Jack Nicolson-Diane Keaton rom-com Something’s Gotta Give. She got what she wished for.

The kitchen.  Courtesy of Houlihan Lawrence

The kitchen, and the home’s crisp, clean-cut interior, is the work of hot New York New American Classic designer Victoria Hagan. She gave the graciously-proportioned and flowing rooms an elegant, yet intimate feel. Plus lots of white paint.

Outside, steps lead down to a lower, pool-level patio where there’s a games room, lounge, bar and wine wall. The pool itself is infinity-edged and has adjoining grand stone steps leading down to the tidal Thrushwood Lake which, unfortunately is blocked by low bridges to anything but kayaks and the teeniest of row boats.

The kitchen was inspired by the film, ‘Something’s Gotta Give.’  Courtesy of Houlihan Lawrence

Sabag says that with the Armstrongs recently becoming empty-nesters, they’ve decided to downsize and relocate to one of their other homes.

With a new season of Billions airing in May, be on the lookout for another million-dollar aerial view of 131 Meadow Lane.

The view from across the river.  Courtesy of Houlihan Lawrence

The river leads out to the Long Island Sound.  Courtesy of Houlihan Lawrence