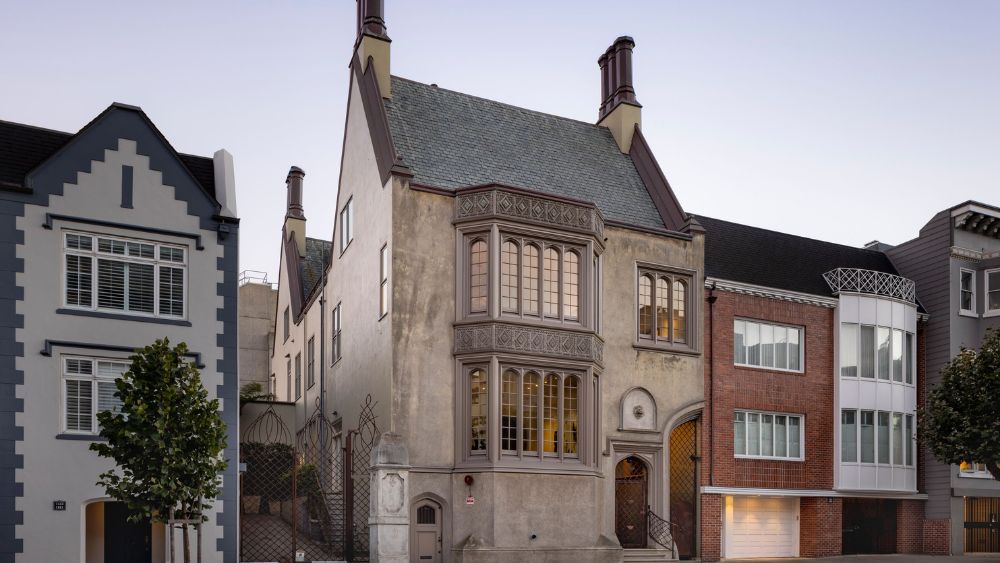 This storied San Francisco home might be half finished, but it’s certainly full of history.

Members of the Pacific Palisades community will likely know the architectural significance of this particular Tudor Gothic Revival mansion. For the unversed, here’s the skinny: The landmark Tobin House in the Bay Area was built in 1915 for Michael H. de Young, a journalist and the founder of the San Francisco Chronicle. Now, the last remnant of his medieval-looking estate has just been listed for $13.85 million.

More than a century ago, de Young commissioned architect Willis Polk to construct the stately California property. It was initially designed to be two adjacent homes, one for each of his daughters. The current residence was meant to be built alongside a twin house that was connected via an archway, but the right side was never completed. No one knows for sure what caused Polk to stop halfway through, although local folklore suggests de Young’s daughter Helen wanted to remain in her own estate.

“Anyone who has been in this part of San Francisco for a long time has noticed this home’s beauty,” listing agent Stacey Caen of Sotheby’s International Realty told the Wall Street Journal. “The incomplete arch makes people wonder what could have been.”

The sellers, husband-and-wife duo Anthony and Celeste Meier, bought the Tobin House in 2004 for roughly $6.5 million and carried out nearly $5 million worth of renovations. Currently, the couple runs an art gallery on the first floor. “As a stand-alone, it’s a beautiful piece of sculpture,” Anthony said.

The 8,990–square-foot home has five bedrooms and five bathrooms spread across its four stories. While the exterior comes off as foreboding thanks to its gray concrete plaster facade and copper chimney stacks, the inside tells a much brighter story. There are diamond-patterned lead windows that let in ample amounts of natural light in the living room. In addition, the third-floor sitting area features a vaulted ceiling with a skylight. The modern floorplan also comprises a wine room, a gym, a gourmet chef’s kitchen, a walkout terrace and a large library.

If you’re wondering why the couple has chosen to part ways with the historic property, it’s because, like many empty nesters, they’ve decided to downsize. Their loss could be your gain.

Click here to see all photos of The Tobin House.