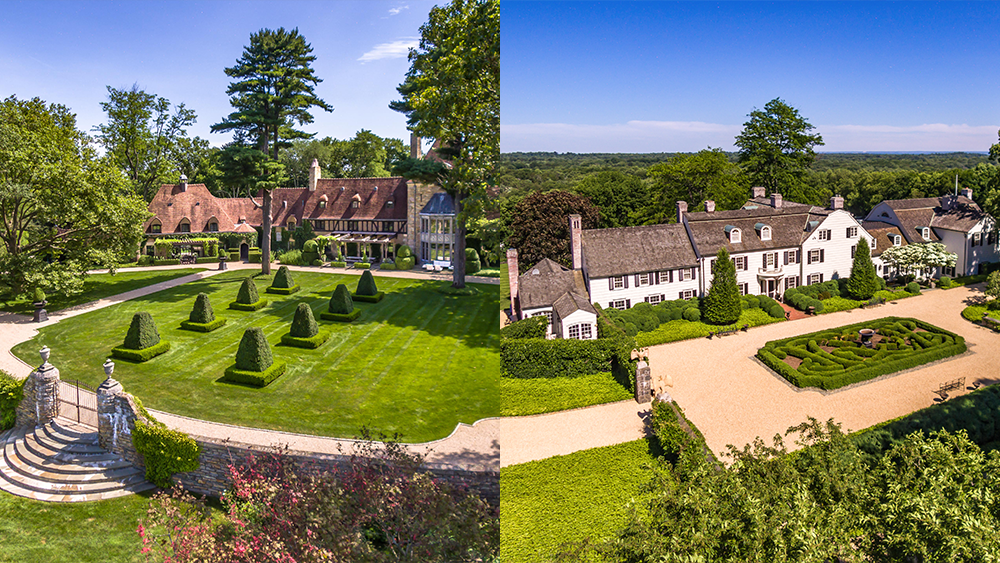 To show just how searing-hot the high-net-worth home market in the tony enclave of Greenwich, Conn. is right now, take a look at the spectacular 17-acre spread that’s just been listed by fashion icon Tommy Hilfiger’s first wife, Susie Hilfiger.

For most of 2019, the wooded hilltop estate with views of Long Island Sound languished on the market for $30 million. With the onset of COVID-19 last April, Hilfiger decided to pull the listing.

Now, roughly nine months later, she’s put it back on sale with a nice, round $40-million price tag.

“There are a lot of big buyers out there right now looking for special properties. And this is truly one of a kind,” Sotheby’s International Realty listing agent Janet Milligan tells Robb Report.

One of those “big buyers” recently stepped in to snap up another $40-million-plus Greenwich property—this one owned by Hilfiger’s ex., Tommy Hilfiger and second wife Dee Ocleppo Hilfiger.

That couple listed their French-chateau-style mansion for $47.5 million last September and, according to Milligan who also held that listing, had three buyers competing for the home. It sold eight weeks later for $45 million and just this past week closed.

Tommy Hilfiger’s home, which he sold was originally listed at $47.5 million and sold for $45 million.  Samuel Rodriguez & Steve Rossi for Sotheby’s International Realty

Susie Hilfiger’s equestrian estate certainly has no shortage of curb appeal. After she and her ex bought the run-down estate in 1995 for $8.5 million, they completely renovated the compound, which has parts of its main house dating back to the late 1700s.

A long, crunchy-gravel driveway leads from Riversville Road, a 10-minute drive from downtown Greenwich, to the main shingle-roofed home with its multitude of wings and additions.

According to the Greenwich Historical Society, the Hilfigers bought the estate from Joseph Verner Reed, Jr. who’d enjoyed an illustrious career as the US Ambassador to Morocco and Under-Secretary-General of the United Nations.

Reed’s father, a well-known author, theatrical producer and founder of art printing company Triton Press, first acquired the property back in 1935 and passed it on to his son in 1972.

The main house stretches over 14,000-square feet and comes with seven bedrooms, nine bathrooms and 12 fireplaces. Highlights include a magnificent ballroom with paneling and a marble mantle imported from the 17th century Hotel Particulier Montmartre in Paris, former residence of the Hèrmes family.

The formal dining room feature original, hand-painted Gracie Chinese wall coverings, while a reception room showcases furniture from the Paris home of the Duke and Duchess of Windsor. Susie Hilfiger purchased the pieces at auction in the 1990s.

According to Sotheby’s Milligan, they’re not included, but may be available for purchase separately, at the right price.

While no photos of the home’s interior have been made available, Milligan describes it as “stately and very Old World.” And, because of its Hilfiger design pedigree, “just beautiful and elegant.”

Among the multitude of rooms, there’s a silver room for Hilfiger’s sterling collection, a flower-arranging room, library, and even an “oval” office. The updated kitchen includes the original meat locker for cold storage.

On the expansive grounds, there’s a stand-alone guest cottage, two separate apartments above the garages, and for the kids, an outdoor playhouse inspired by Mount Vernon, the historic former plantation home of George and Martha Washington.

For equestrian lovers, the finished barn has stalls for four horses and a couple of ponies. The barn also includes a stylish office where Hilfiger used to run her high-end kids’ clothing company, Best & Co.

Add to all this a tennis court, pool, well-equipped gym, apple orchards, English sculpture garden, fancy chicken coops and even a goat house. The list just goes on.

As for Hilfiger’s plans after the inevitable sale, Milligan says she intends to eventually spend more time in California where her daughter Ally—one of four grown Hilfiger children—now lives.