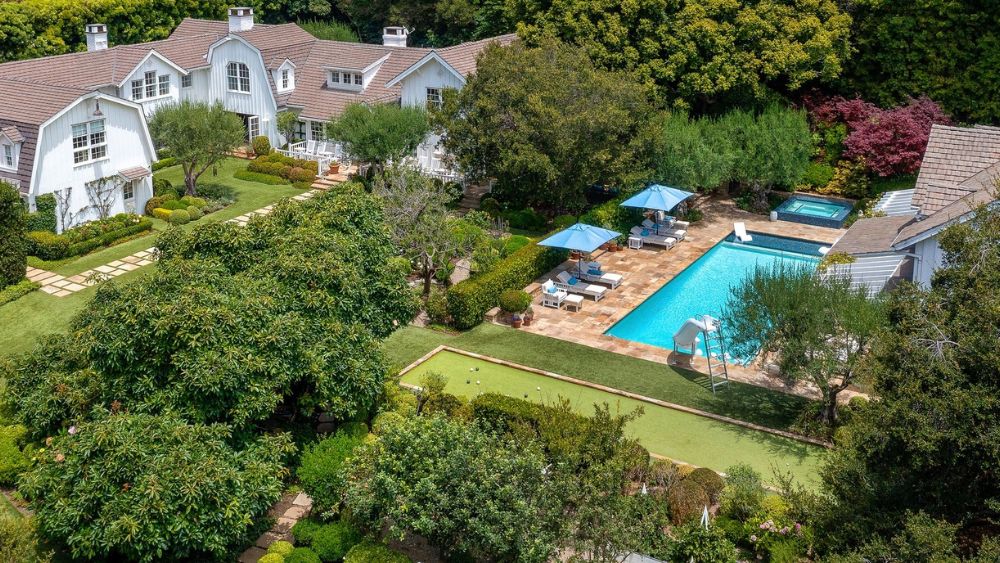 This newly listed Pacific Palisades property has updated nearly everything about the original 1950s estate, including a clever repurposing of its Cold War-era bomb shelter.

Dubbed Valley Farm, there are seven bedrooms and 10,000 square feet of living space spread across four structures located on this gated LA compound’s 1.12 acres. It includes a main residence, a two-story pool house, a guest house that doubles as a gym and a temperature-controlled wine cave converted from a bomb shelter. The estate is being listed by Carl Gambino of Compass for $37.5 million, which is more than its asking price of $25.5 million just one year ago, reported the Wall Street Journal.

The farmhouse-inspired property, originally built in 1952, is currently occupied by Ohio native Rita DeLeone. DeLeone has made significant updates to the home during her ownership, including a rebuild of the main house in 2012, designed by renowned architect Marc Appleton.

She’s also added a new pool and spa to the estate that also features a bocce ball court, batting cage and ample lawn space. Elsewhere, you can enjoy sitting underneath a canopy of olive and oak trees on the outdoor dining porch, tending to the vegetable garden or picking fresh fruit from the orchard.

The main house, although taken down to the studs and rebuilt, still retains many of its original details from the ‘50s. Notable characteristics include vaulted ceilings, wood beams, stone fireplaces and hardwood floors. That throwback design has been enhanced by some modern amenities, including a state-of-the-art chef’s kitchen, great room, study, media room and its own English-style pub. The primary suite, which has a dedicated wing, is complete with a his-and-hers marble bathroom, a massive walk-in closet and three additional en-suite guest bedrooms. The residence is also outfitted with electronic shades, security systems and other modern amenities.

The 1950s bomb shelter that was converted into a 1,000-bottle wine cave  Ryan Lahiff

The two-story pool house—which can double as a guesthouse—has its own kitchen, laundry area, living room, bathroom and two private suites. It also has the most direct access to the property’s pool, al fresco patio and fire pit. The smaller, secondary guest house functions as a gym now and is equipped with a wet-dry sauna.

The previously mentioned wine cave is its own structure, able to hold over 1,000 bottles. The former fallout shelter was built into a rock formation and when DeLone chose to renovate her estate 10 years ago, she made the decision to preserve the bunker and transform it into a wine storage area. Come the apocalypse, we could certainly think of worse places to hide out.

Click here to see all the photos of Valley Farm.