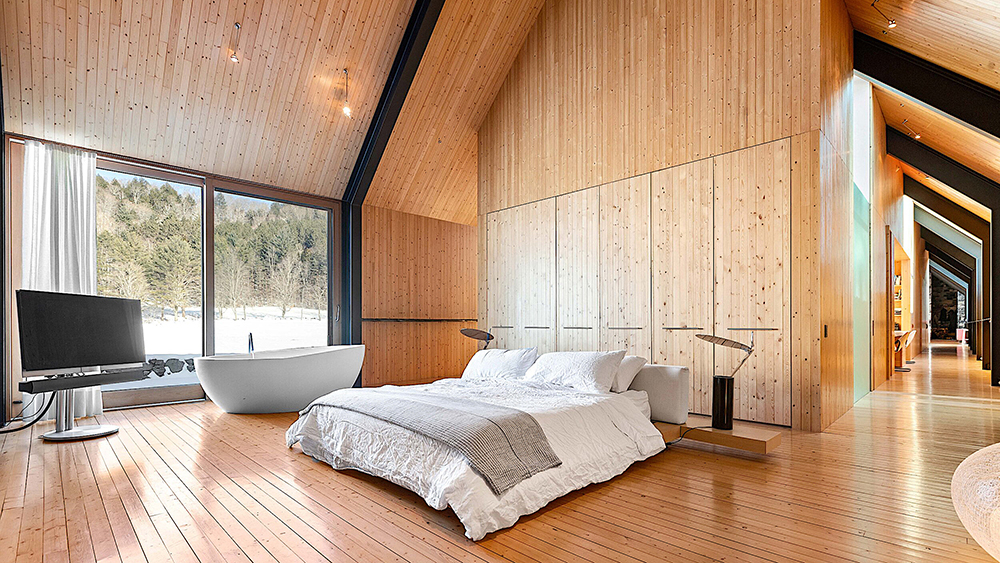 Judging from the exterior, this home looks like it could have been constructed a century ago. Yet this sleek, minimalist farmhouse set on 200 lush, rolling acres just outside of Woodstock, Vt. is just 10 years old.

Woodstock Farm is the work of Tucson-based architect Rick Joy, whose award-winning portfolio includes the stark Amangiri Resort and Spa in Southern Utah and the fabled Desert Nomad House in the Arizona desert.

Comprising an elongated 3,890-square-foot main house set at an angle next to a 5,625-square-foot cedar-shingle barn, this spectacular and serene family retreat has nine bedrooms and seven bathrooms.

Those familiar with Vermont know Woodstock as one of the state’s most charming villages, and it’s just 10 minutes from this home. Boston is just a few hours away, Dartmouth College a quick 20 minutes and ski resorts are all within a short range.

Working closely with the owner, a well known Boston-based property developer, Joy designed the two buildings to blend seamlessly with the surrounding Vermont landscape and nearby Green Mountains.

The 150-foot-long main residence features massive end walls formed from bedrock dredged from the bottom of nearby Lake Champlain. Massive steel I-beams support the pitched roof, giving cathedral ceiling heights inside of up to 22 feet.

Enter through an unassuming doorway at the end of the house and wind through a whimsical, stone-walled maze that leads into a soaring great room. Walls of floor-to-ceiling sliding glass windows give breathtaking views of surrounding rolling pastures.

At the one end of the room is another wall of stone with a fireplace.  At the opposite end is the sleek kitchen with a wide central island featuring stainless-steel countertops and unadorned, stark white cabinets.

Corridors at either side of the kitchen lead to a vast master suite with a freestanding bathtub beside a huge window for scenic soaking. A further three ensuite bedrooms and corridor with computer work stations, are earmarked for kids.

The great room has its own magnificent stone wall.  Courtesy of Flylisted.com

One surprise-and-delight feature is found in the basement; an indoor ice hockey rink with a synthetic ice floor—perfect for those blustery days when it’s just too cold to be out on the ice and the warmer not-quite-spring days when the ice isn’t quite safe. And for the real enthusiast, there will never need to be an off-season again.

The towering two-story barn alongside the main house provides guest accommodations for up to 12 in four second-floor bedrooms. On this level there’s also a huge games room and studio to keep guests entertained.

The serene kitchen.  Courtesy of Flylisted.com

Stairs lead down to the lower level where there’s a garage with plenty of adjoining storage, plus an indoor basketball court that can be opened up to become an outdoor court.

A long, wide deck leads out from the barn to a spring-fed pond that doubles as a skating rink in winter and swimming pool in summer.

The master suite feels like a retreat.  Courtesy of Flylisted.com

The home won Architectural Record magazine’s House of the Year title in 2010 and has long been a favorite of the architect himself. So much so that for the past decade he’s been holding an annual 10-day seminar at the property, inviting young architects and designers to “live within its walls” during his sessions.

The hallway to the children’s wing.  Courtesy of Flylisted.com

Records show the farm was first listed back in 2015 for $8.75 million. But since then the owner spent a substantial amount on new features on the property, such as a charming stone wall, a bridge across a creek and an orchard.