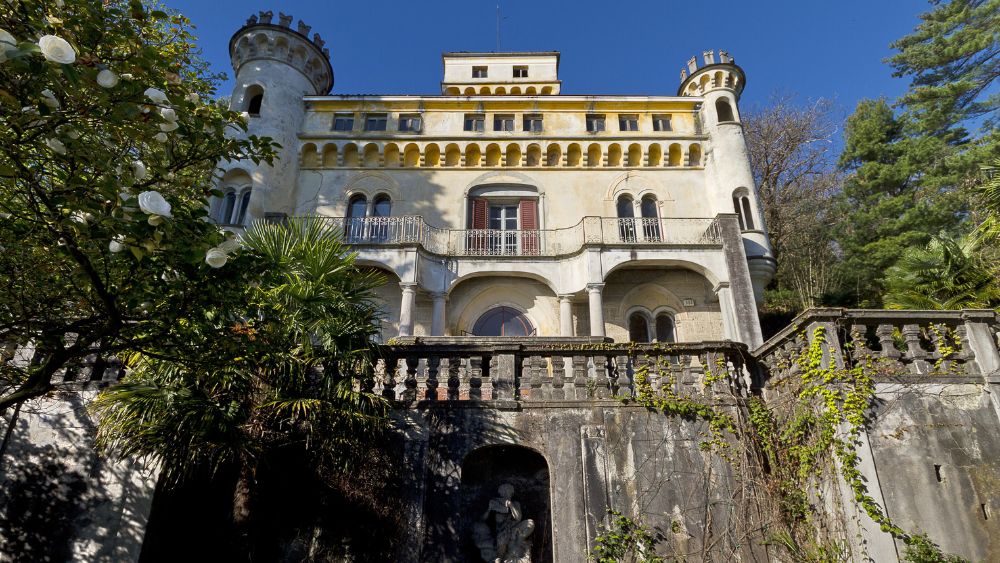 Dubbed Villa Castello Pellegrini, this striking 19th-century estate in Stresa is said to have once belonged to late designer and stylist, Gianfranco Ferré. The former artistic director for Christian Dior passed away in 2007 before completing renovations on the neoclassical manse, and its subsequent owners also faltered in restoring the castle to its former glory. Today, the 129,000-square-foot property is back on the market for $2.9 million and awaits a buyer willing to give rehabbing the lot another try. And while the bones certainly require some TLC, its site on sparkling Lake Maggiore is the real draw.

Dating back to 1890, Villa Castello Pellegrini comprises a 6,598-square-foot main residence that’s perched on a hilltop overlooking Italy’s second-largest lake. The design features are befitting of a castle, including two circular corner turrets and a central square tower. The dwelling itself is spread over three floors in a symmetrical floor plan and still offers many details from its original footprint when Ferré inhabited the home. Think a white Carrara marble spiral staircase, grand entrance, wraparound balcony and even an elevator. Elsewhere, arched doorways, private terraces and stone columns help complete the regal picture.

In total, there are nine bedrooms and a basement with two wine cellars—which will no doubt come in handy should you host guests as Ferré intended. On that score, a quaint cottage and two-floor annex are close by. The latter is outfitted with its own kitchen, living area and two bedrooms. While the castle has seen better days, it stands at the center of a two-acre park that’s complete with Italian-style gardens, fountains, statues and private beaches.

“It can certainly be defined as one of the most beautiful properties on Lake Maggiore,” notes the listing, which is currently being held by Stresa Luxury Real Estate.

Click here to see all the photos of Villa Castello Pellegrini.