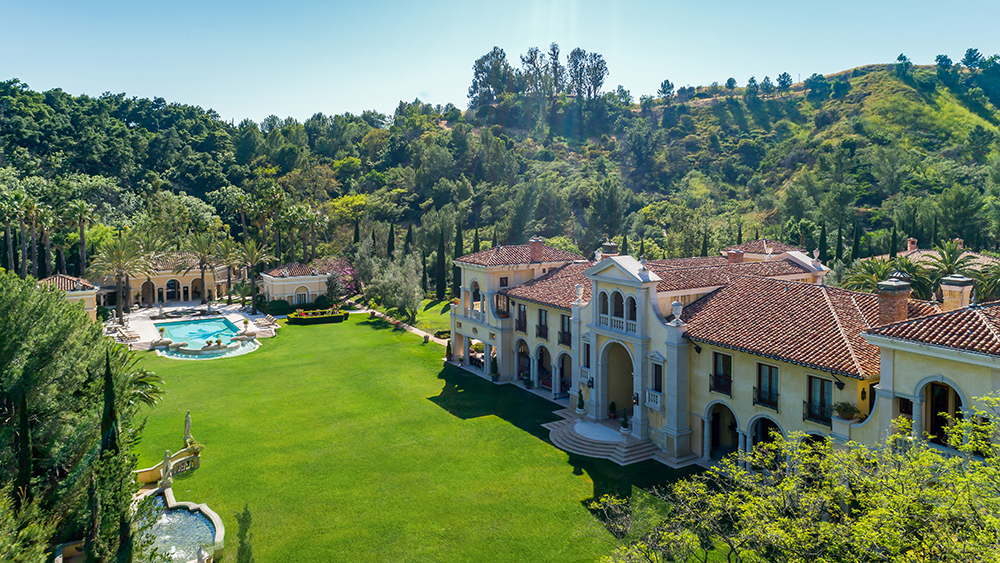 Villa Firenze, a massive mansion in a gated community within Beverly Hills, is currently up for sale for $160 million—one of the world’s most expensive offerings at the moment—but it’s going to auction in January, with bidding starting on January 26. The property, a compound made up of a main house and three guest cottages, has more than 20,000 square feet of living space with a whopping total of 13 bedrooms, 17 full baths and eight half baths. It sits on more than nine acres of primo real estate in North Beverly Park, with a running trail along the estate’s perimeter.

The drama begins upon entry with a private road and guarded gate. The driveway leads to an open courtyard and motorcourt lined with Canary Island palms, including room to park 30 cars.

The foyer is no less dramatic, with marble flooring and tall columns stretching to cathedral ceilings. The Italianate, Mediterranean design speaks to the home’s name. Finishes such as vaulted ceilings, carved moldings and more were some of the signature touches added by architect William Hablinski when the home was originally built—it took five years—in 1998. Fireplaces add interest to both public and private rooms. The primary suite includes the usual feels—multiple walk-in closets plus a dressing room.

In addition to the standard living spaces and all those bedrooms, this modern-day palace offers a massive pantry, a home gym, a craft room, a video-gaming room, five home offices and staff quarters.

The surrounding grounds are no less spectacular: A resort-style pool dominates the deck just off the house, along with a jacuzzi and pool house (a caretaker apartment occupies the second floor) and a cabana kitchen. Formal gardens and a fountain are part of the four acres of manicured lawn. There’s also a sports field, a tennis court, a basketball court, a fenced dog run and a six-car garage. Security patrols the property 24/7. Neighbors include Denzel Washington, Sly Stallone and Eddie Murphy.

The home is near two legendary LA byways, Sunset Boulevard and Mullholland Drive, and is just nine miles from the region’s private jetport at Van Nuys Airport.

Check the Concierge Auctions site for bidding updates and contact information, and see more photos of the property below:

One of the home’s 13 bedrooms.  Photo: Courtesy of Hilton & Hyland