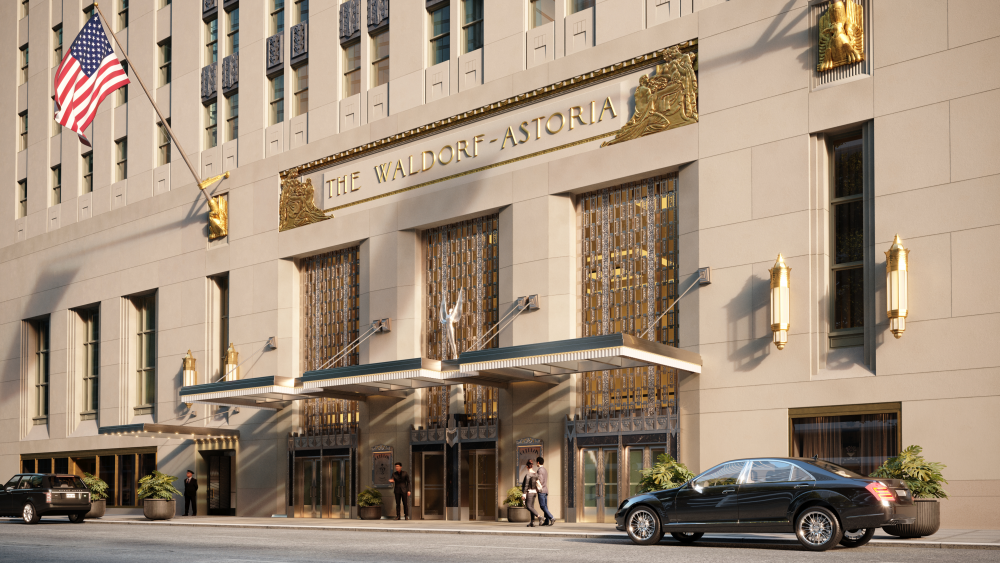 The Waldorf Astoria New York is back. On the heels of a whopping $1 billion renovation, the historic structure will be reopening for the first time since its 2017 closure, with 375 hotel rooms and 375 brand-new residential condos.

Dajia Insurance Group, the new owner, hopes the building’s rich history—its façade and many of its interiors are registered landmarks, and the hotel counts everyone from JFK to Liza Minnelli among its visitors—will appeal not only to travelers but to buyers as well. Studio residences will start at about $1.7 million, according to the Wall Street Journal. On the higher end, two “pinnacle” penthouses will be available—exact asking prices remain under wraps, but expect them to list in the tens of millions. Sales for all of the above will launch in early 2020, with the renovation completed the following year.

Dubbed the Towers of the Waldorf Astoria, the new condos represent a first for the landmark building. Despite its century-long history, the Waldorf has never counted formal residences among its hotel offerings. (Unless you count composer Cole Porter, who took up a long-term residency in the Waldorf while writing songs such as “Anything Goes.”) The apartments average around 1,700 square feet each, with sprawling floor plans that boast libraries, entertainment rooms and master bedrooms with en suite baths and walk-in closets. These offerings will run the gamut from studios to four-bedrooms.

Beyond the residential units, the 50,000 square feet of private residential space includes an array of impressive amenities, such as 82-foot lap pool, spa and fitness room and artworks curated by Swiss collector Simon de Pury.

Dajia also tapped French interior designer Jean-Louis Deniot to design the apartments, as well as the amenity spaces. Designer Pierre-Yves Rochon, meanwhile, is overseeing the public areas and hotel interior, much of which has been restored to its old-world glory. The grand ballroom, for example, was recreated almost exactly as it was in 1980, and the Waldorf’s four-faced clock, which dates to 1893, will be fully restored.

Finally, the Spirit of Achievement, a winged sculpture that has become emblematic of the Waldorf Astoria New York, will be returned to its perch above the hotel’s main entrance. Her triumphant return, ownership hopes, will signal a new, modern era for the Waldorf—albeit one that honors its historic roots.

Check out more renderings of the new Waldorf, below: