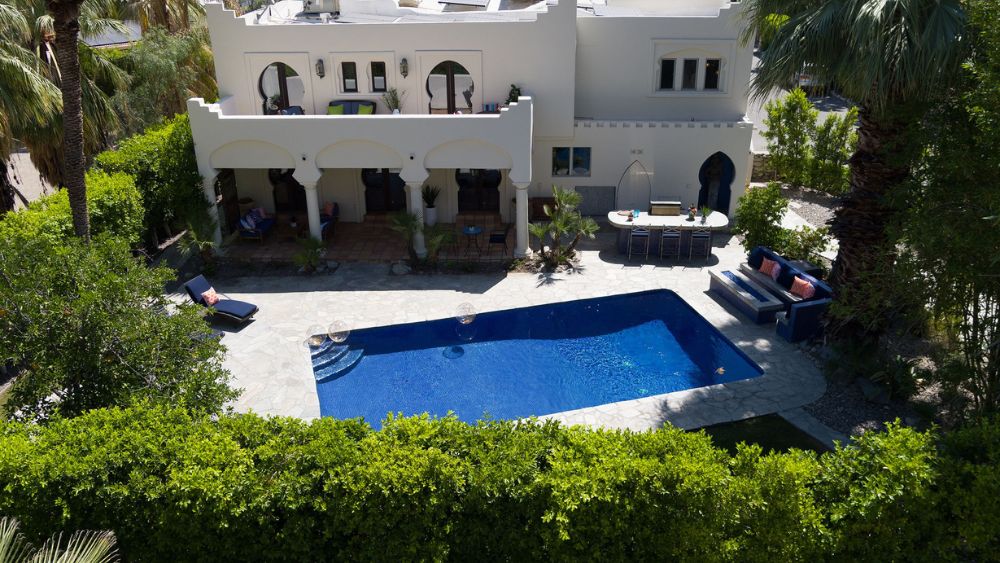 The 3,306-square-foot Coachella Valley compound was constructed by Neff nearly a century ago. Located in the ultra-exclusive Historic Tennis Club neighborhood, the estate comes with an asking price of $3.49 million and has since undergone an extensive renovation and expansion. It was also the first-ever two-story home to be built in Palm Springs, according to Dirt.

The showstopping residence was originally commissioned by Arthur K. Bourne, heir to the Singer Sewing Machine empire. Bourne was so taken with the Hollywood architect’s distinctive style that he bought not one but three Neff-designed abodes—including the gardener’s cottage which was previously part of a larger compound. The iron-gated property now has additional square footage, four bedrooms and four bathrooms, a guest casita, two kitchens and a cobalt blue-tiled swimming pool. Because it’s in the Golden State, a rooftop solar panel system has also been installed.

Taking advantage of the site’s panoramic views of the San Jacinto Mountains, the resort-like grounds are a fitting match for the Southern California landscape. At the front of the white stucco exterior is an attached three-car garage. The back of the lavish home leads to a lush, private courtyard that deploys elaborate, geometric walls and arched loggia consistent with Neff’s Spanish Colonial aesthetic. This is where you’ll find the pool alongside a fire pit and built-in grill.

Inside, meanwhile, rainbow hues abound in the main living areas, with terra cotta flooring and custom mosaic tilework—a multi-colored fireplace in the living/dining room is particularly noteworthy. On the second floor, the main bedroom offers a spacious private terrace, walk-in closet and spa bathroom. Additionally, the upstairs contains a media room, home office and a kitchen that opens up to its own balcony.

Over the years, A-listers such as Diane Keaton, Brad Pitt, Jennifer Aniston, Reese Witherspoon and Madonna have called Neff’s creations home. The lucky soul that will lay claim to this Coachella Valley estate is yet to be determined. Sandra Quinn of Berkshire Hathaway HomeServices California Properties holds the listing.

Click here to see all the photos of the Wallace Neff Palm Springs home.