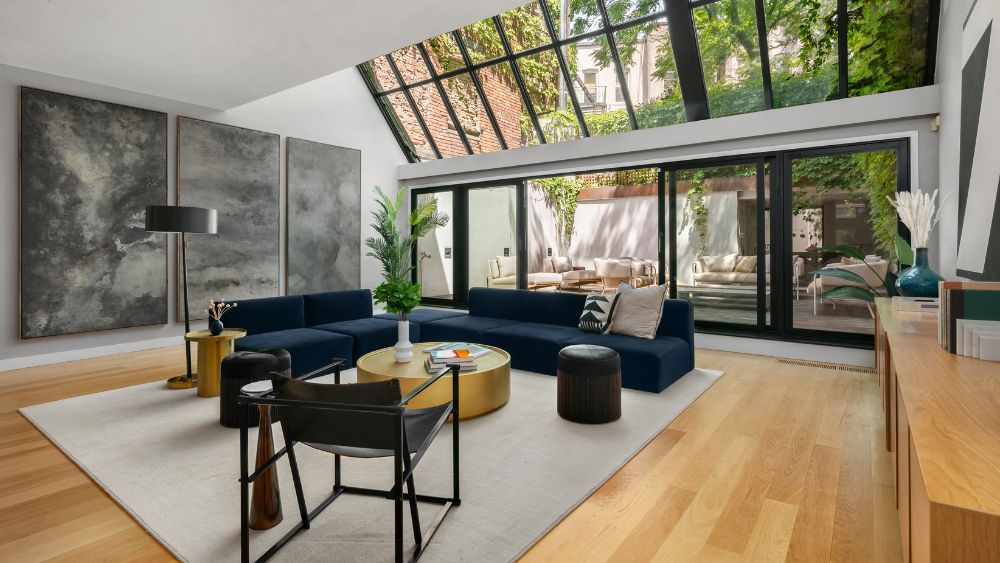 A Manhattan townhouse formerly owned by two big-shot publishers has just listed for $13.8 million. What buyers might not realize is that the West Village residence has hosted several other famous figures within its century-old walls.

The blue-brick building was originally built as a carriage house in 1899 and has since been given a contemporary makeover by its previous occupants. Two of its prior inhabitants include Barney Rossett, the founder of Grove Press, and Peter Mayer of the Penguin Group. Throughout the years, the palatial pad on W Houston Street was said to have hosted the likes of John Lennon, Norman Mailer and Elton John.

“The property’s entry level is nearly 100 feet long, and ceilings are extra high throughout with many large skylights bringing in tons of sunlight and views of the sky, plus there are three outdoor spaces, including a roof terrace,” Douglas Elliman listing agent George Vanderploeg tells Mansion Global.

The 7,200-square-foot townhome has three bedrooms, five full baths, an elevator and a spacious two-car garage. There’s also a whopping 1,900 square feet of outdoor space spread across its four levels—which includes that sprawling roof terrace and a bamboo garden. The interior, although modernized, still offers up many historic details, including 13-foot-high ceilings, oversized skylights and expansive windows.

On the second floor, a chef’s kitchen has been decked out to Michelin standards with a Bluestar stove, dual ovens and Miele appliances. For the oenophiles, a Sub-Zero wine cooler can hold up to 300 of your prized vintages. Upstairs on the third level is the primary suite; here, wall-to-wall, floor-to-ceiling glass windows look out at the garden below. You’ll also have your own massive walk-in closet and a bathroom that’s been outfitted with a soaking tub, a glass shower and a skylight.

In terms of conveniences, you’ll find a gym, a six-person sauna, a media center and a smart-home sound system. An even cooler amenity? The basement recording studio, in case the next buyer ever wanted to lay down some tracks.

Click here to see all the photos of this W Houston St townhouse.