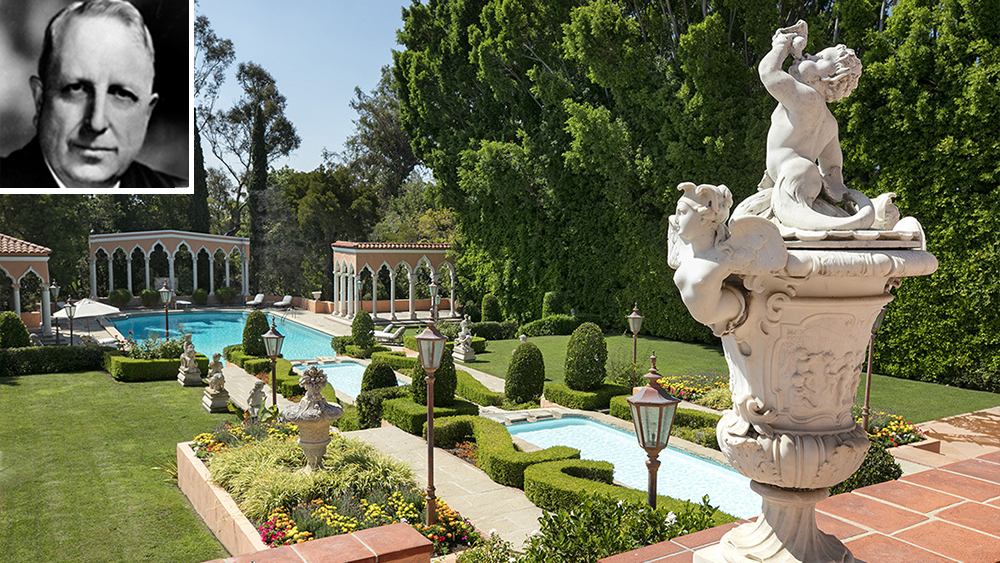 One of L.A.’s most storied estates, known for nearly a century as Beverly House but newly rebranded as Hearst Estate, will return to market this week amid bankruptcy proceedings with a price tag pushing up on $90 million.

Just three blocks north of Sunset Boulevard and designed by acclaimed engineer Gordon Kaufmann, who had a hand in the design of Hoover Dam, and built in 1927 by banking executive Milton Getz, the 3.7-acre Beverly Hills estate was acquired in 1946 for around $120,000 by Golden Age Hollywood icon Marion Davies and her longtime (and long-married) man-friend, newspaper magnate William Randolph Hearst, then already in his early 80s. More commonly known for his spectacular Hearst Castle estate that is set on a high mountaintop above the ocean near San Simeon, Calif., Hearst spent much of his later years in Los Angeles and, in fact, died at Beverly House in August 1951. (The couple also had a gigantic beach house set right on the sand in Santa Monica—it’s now the Annenberg Community Beach House—and, interestingly, Hearst’s obituary in The Los Angeles Times did not mention Ms. Davies even though they lived together openly for more than 30 years.) 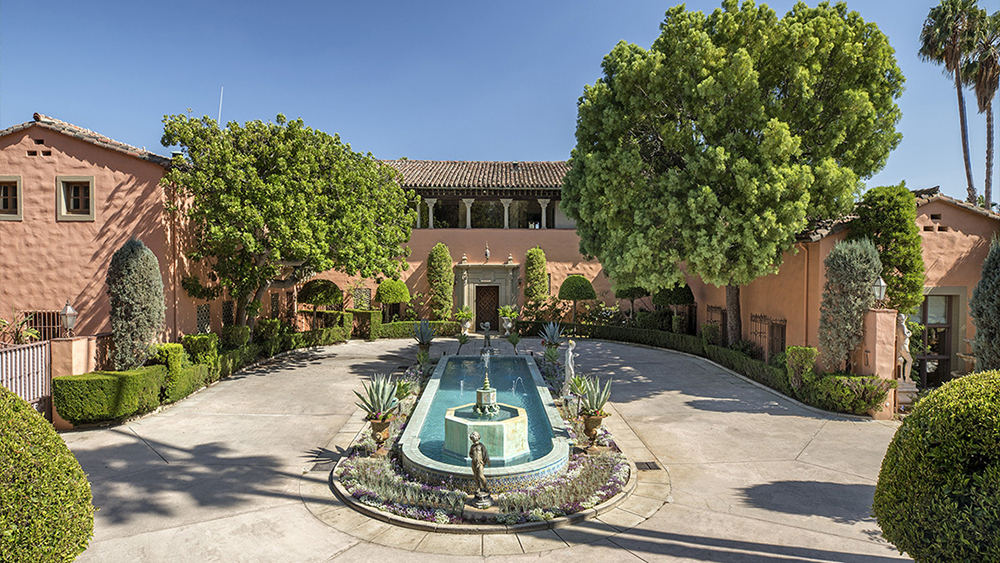 Davies retained ownership of the lavish spread after the death of her wealthy paramour. She’s said to have hosted John and Jacqueline Kennedy for part of their 1953 honeymoon and soon moved in her romantic own side piece, Horace Brown, who inherited Beverly House (and several satellite properties) upon Davies’ 1961 death. The current owner, attorney, financier and real estate investor Leonard Ross, purchased the estate in 1976 for an unrecorded amount. He lived in splendor at Beverly House for decades but apparently ran into some financial issues a decade or so ago and first put the legendary estate on the market in 2007 with a ballsy and, in hindsight, ridiculously optimistic $165 million price tag.

Since then Ross has struggled to off-load his high-maintenance white elephant, where the expense of maintaining the grounds alone would probably bankrupt the average person. In 2013, when it was also listed for rent at a monumental $600,000 per month, it was floated with a still unrealistic $125 million price, and the price inexplicably ballooned to $195 million in 2016. In the fall of 2018 it popped back up with a still-too-high price of $135 million, and most recently, last month, the estate was priced at $119 million after it was again set out for sale in early 2020, just before the Covid-19 quarantines, at $125 million. 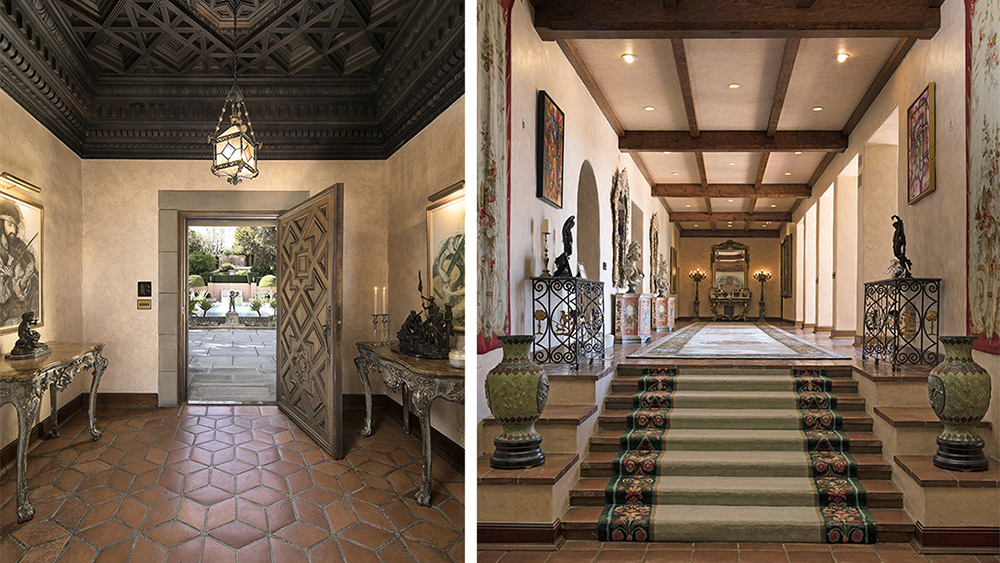 According to The Wall Street Journal, who has tirelessly chronicled Ross’s struggle to sell the estate and first revealed the new $89.75 million asking price, Ross put the limited liability company that owns the property into bankruptcy in 2019 in an effort to “avoid a foreclosure auction and pause litigation over loan defaults.” Fast forward to earlier this year when Beverly House was ordered sold by the bankruptcy court in order to make do on more than $52.3 million in outstanding loans secured against the property.

The listing is now held by a constellation of high-profile real estate agents: Anthony Marguleas at Amalfi Estates, Gary Gold at Hilton & Hyland and Zizi Pak at Rodeo Realty. 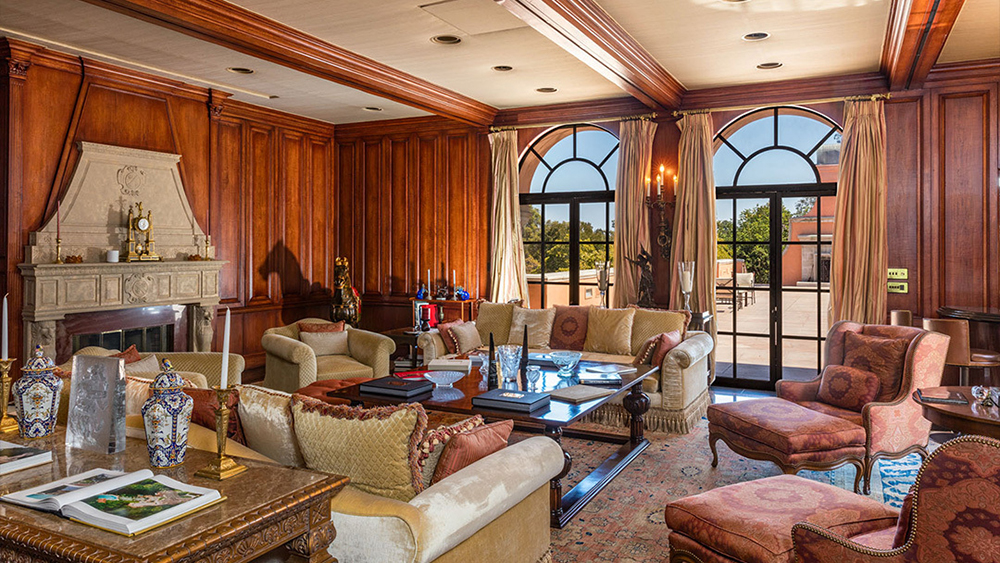 Altogether, the estate spans roughly 36,000 square feet. That’s about 29,000 square feet for the main house and another 7,000-ish square feet in ancillary structures that include two guest or staff apartments, one atop the eight-car garage. There’s also a pool house, a tennis pavilion and a two-story gatehouse with five bedrooms.

The gated entrance is as lavish and secure as that of an exclusive resort hotel or an affluent guard-gated enclave, and the extraordinarily long, tree-shaded drive winds and swoops its way through lush plantings to the front of the H-shaped terra-cotta-colored stucco behemoth that is a blend of Spanish and Italian styles. 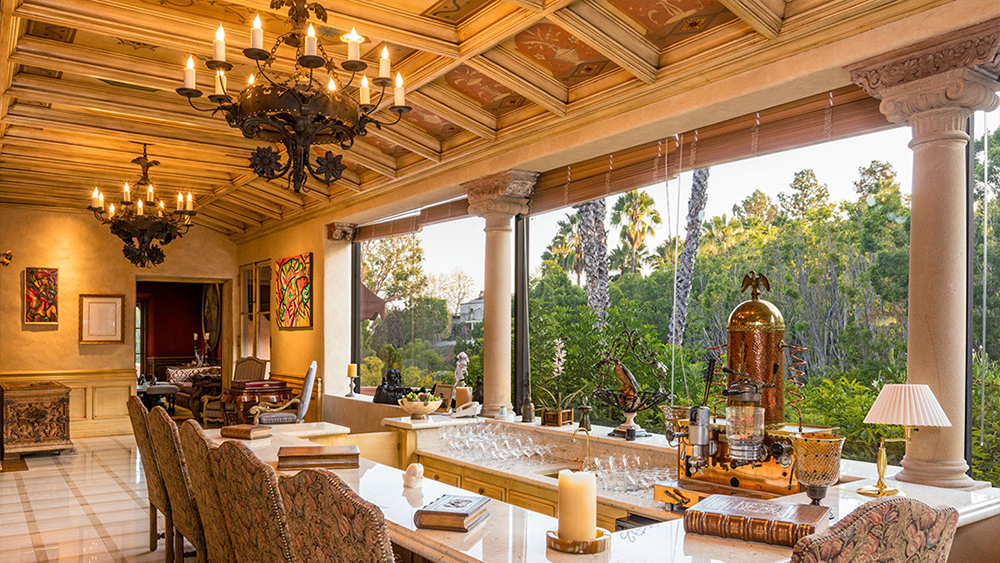 The formal dining room with a spectacular view.  Simon Berlyn

Guests are greeted in a 50-foot-long entrance gallery before being ushered into a cavernous formal sitting room with an elaborately carved and painted 22-foot-high barrel-vaulted coffered ceiling.

Fit for a big business baron, tech tycoon or oil-rich sheik, the grandiose double-height library looks like something ripped out of a cathedral with detailed woodwork and a second-floor gallery, while the billiard room, with its antique carved stone fireplace that was once installed at Hearst Castle, is swaddled in rust-colored suede with an over-scaled herringbone pattern wood floor and a carved wood ceiling no doubt imported from some European chateau.

The ample formal dining room is a dizzying affair that’s wrapped in mirrored panels, while the not-much-less-formal pale celadon breakfast room sports a floral motif on the walls. 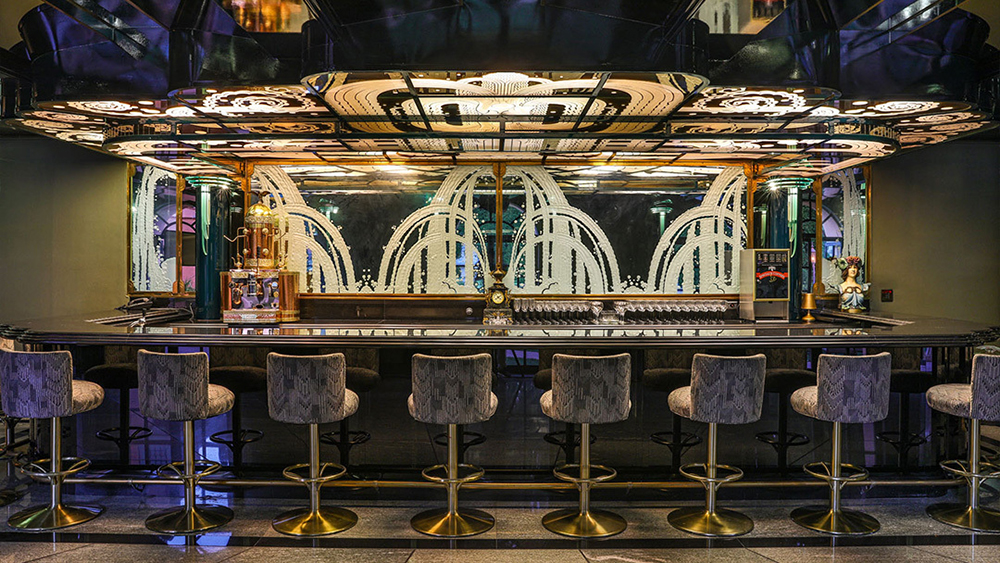 The art-deco-style glitzy nightclub on the lower levels.  Simon Berlyn

The family room, which does double duty as a screening room where a screen drops out of the ceiling, is wrapped in rich wood paneling. Floor-to-ceiling arched windows open the room to a civic plaza-sized terrace capable of hosting 400 or more for a sit-down alfresco dinner.

In addition to a wine cellar and a second screening room, an expansive lower level includes a private nightclub bedazzled in a glitzy, 1980s version of Art-Deco. Another wing of the lower level contains spa facilities complete with a gym and massage room.

Listing agent Gary Gold of Hilton & Hyland told The Wall Street Journal that “This house has all these great, generous hallway spaces that you just never see.” And, sure enough, some of the corridors appear in listing photos as long as a basketball court and wide enough to drive an E-Class Mercedes. 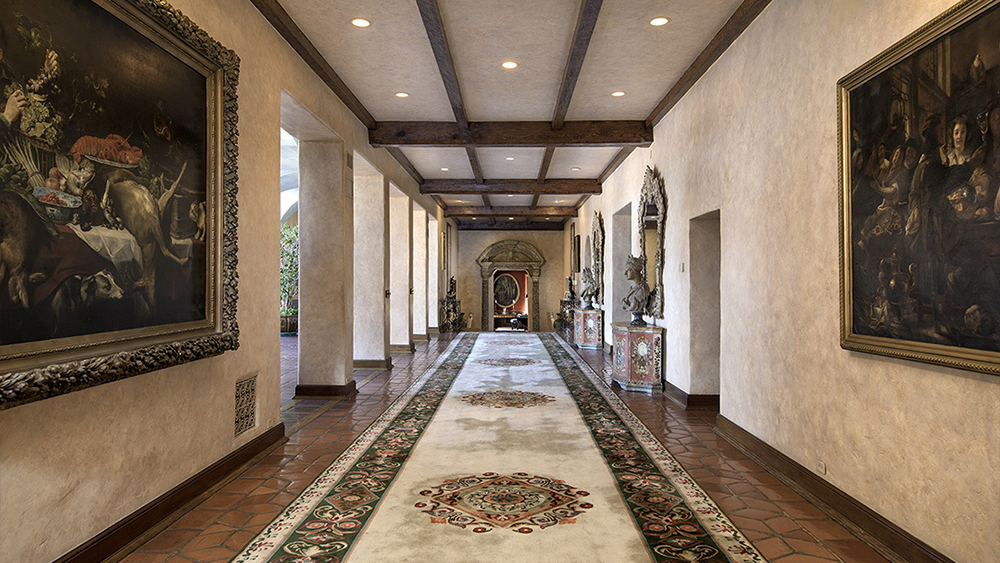 One of the main spacious hallways.  Simon Berlyn

The estate’s grounds offer great sweeps of thick lawns, manicured and flowering gardens and, perhaps its most iconic and recognizable feature, a series of waterfalls that cascade down to the lake-sized swimming pool that is placed amid colonnades of Venetian columns.

The property has appeared in numerous films and television programs. The exterior was used in the still-celebrated 1972 film “The Godfather,” though the iconic horse head scene was not filmed inside the house, and the grounds were also used as the home of Steve Martin’s character, Navin, in the 1979 film “The Jerk.” In the 1980s the house and grounds were featured in an episode of “Charlie’s Angels,” and in the early 1990s it was famously featured in “The Bodyguard.” More recently Beyoncé used the property to film parts of her visual album “Black is King.” 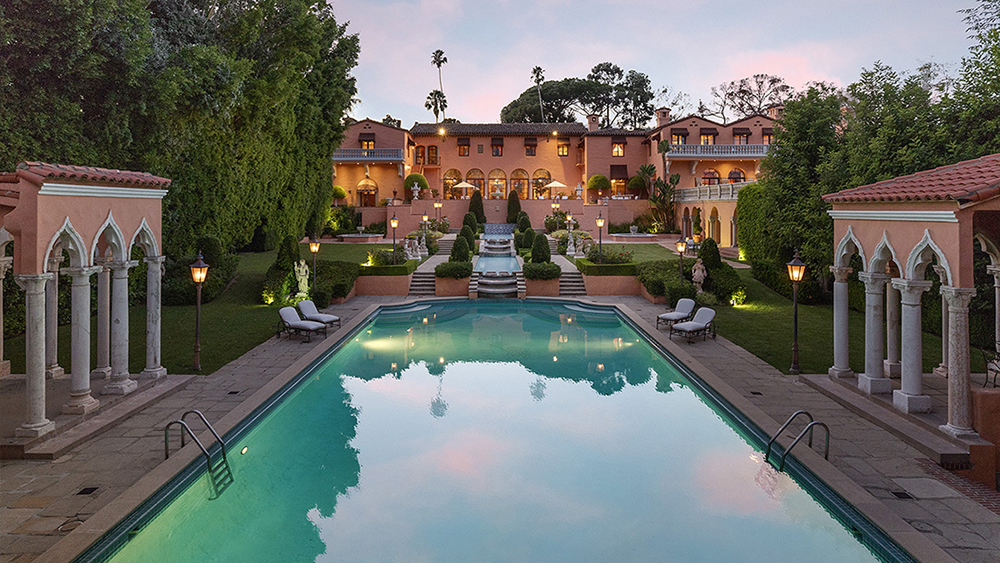 No doubt Ross and his trio of real estate agents, along with his creditors, hope Hearst Estate will benefit from the momentum and publicity created by the (fairly) recent high-dollar sales of some of L.A.’s other great estates: Jerry Perenchio’s Bel Air estate, known as Chartwell — the main house was used in the 1960 TV show “The Beverly Hillbillies,” was sold in late 2019 to Lachlan Murdoch for a searing $150 million, and Owlwood, a ten-acre spread in Holmby Hills was sold in late 2020 to billionaire trophy property collector Ken Griffin in three separate but concurrent transactions that totaled $88 million. 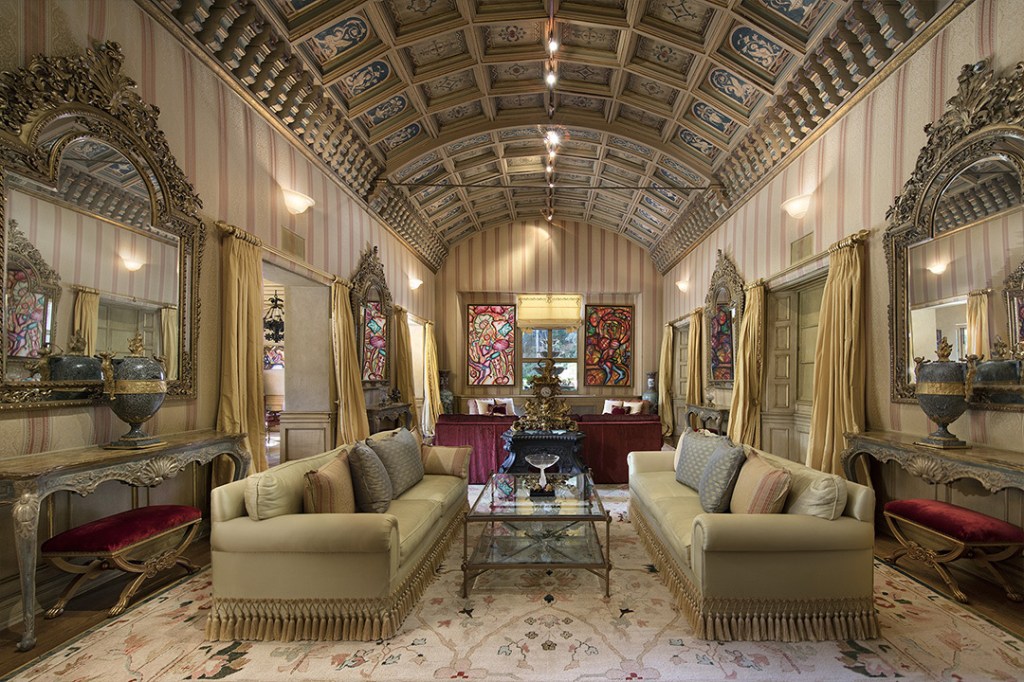 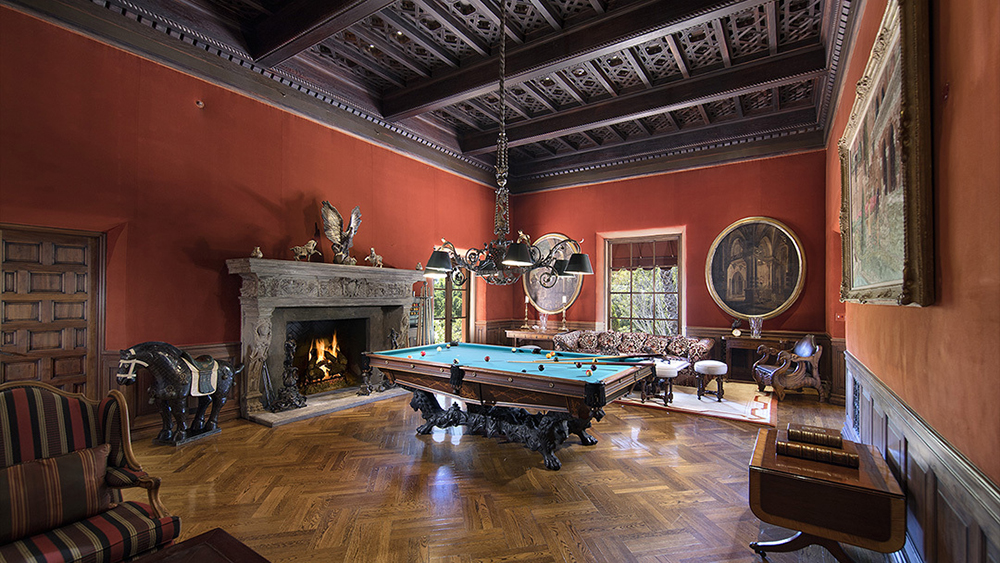 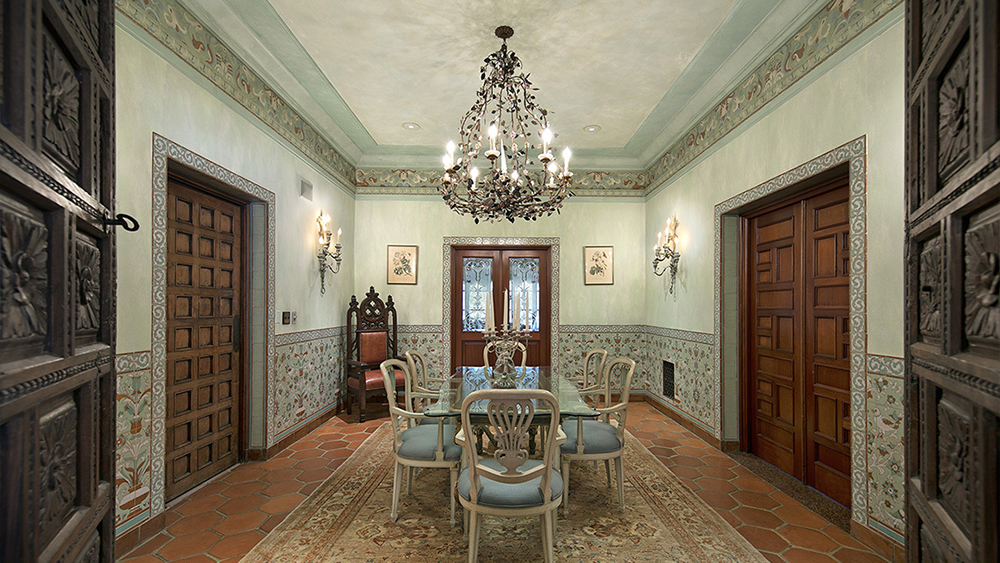 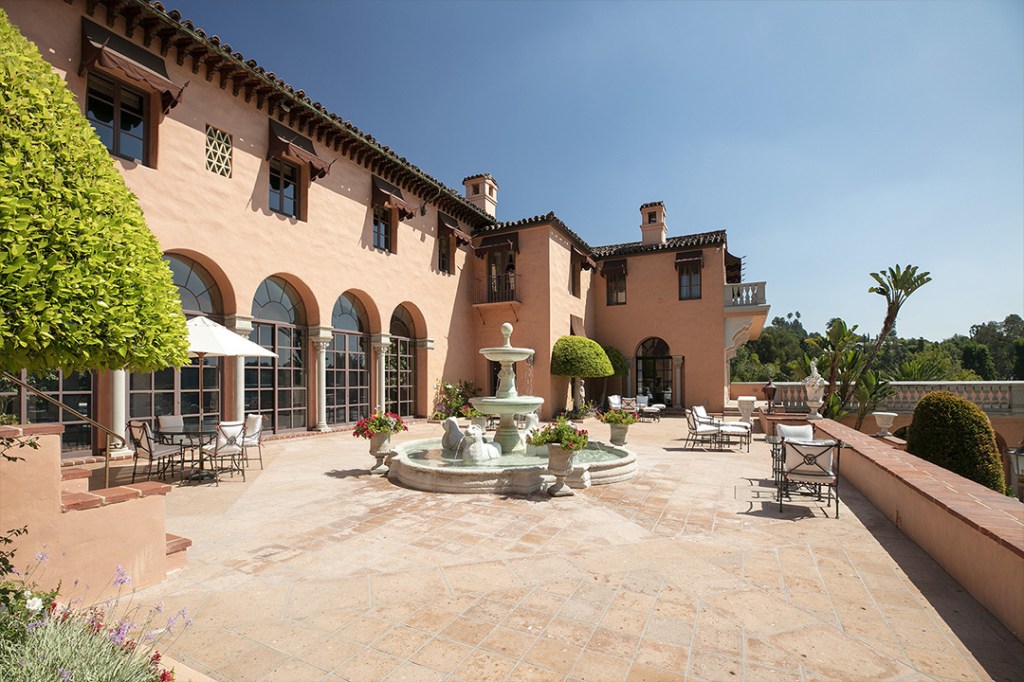