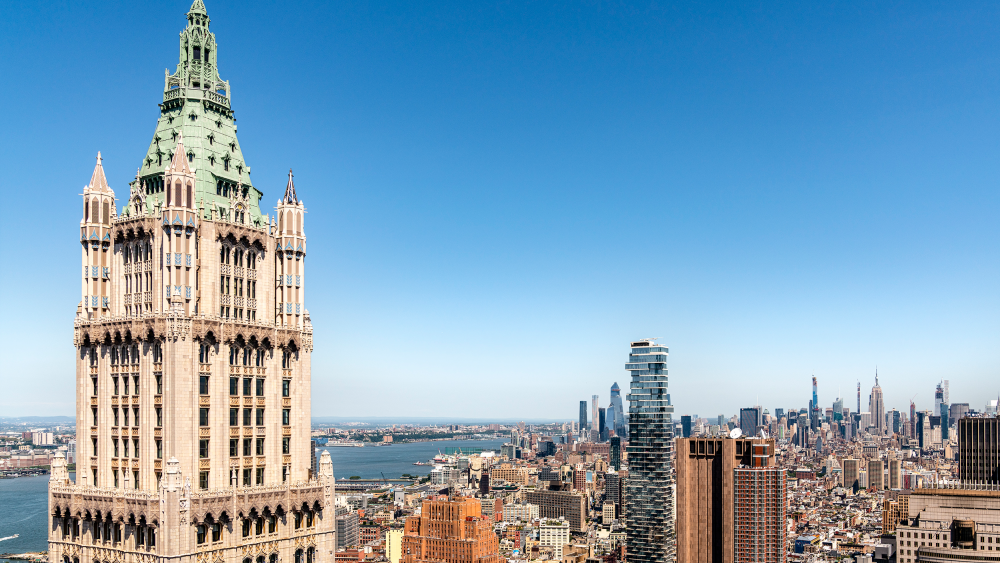 The great room at Pavilion A.

The irony of one of New York City’s most grand duplexes—with an asking price of $29.85 million—is how its history is tied to a brand known for its bargain prices—Woolworth’s. Appropriately for this special space, however, the name now conjures the success of its enterprising founder and the architectural splendor of the landmark Woolworth Building. The newly unveiled 6,711-square-foot apartment occupies not just a place in history, but also in the imagination.

Dubbed “Pavilion A,” the unit sits on the 29th floor of the neo-Gothic skyscraper, with 28 floors of commercial space below. But you won’t be mingling with the building’s many business tenants, as the residential lobby is entirely separate, marked by a spectacular ceiling made of original plaster and horse-hair tiles from millionaire namesake Frank W. Woolworth’s former office on the 40th floor. Developer Alchemy Properties enlisted architect Thierry Despont—perhaps best known for his centennial restoration of the Statue of Liberty—to revive vintage features throughout the building.

The entrance gallery, with a statement mirror by Christopher Guy.  Photography by Travis Mark

Zip up the elevator to Pavilion A, and you’re met with the stunning interior staging of Clive Christian and Joey Leicht, which continues the blend of old-world charm with new-world sensibilities that began downstairs. “We had to marry the modern method of living with the history of the building,” the president of Alchemy Properties, Ken Horn, tells Robb Report. “In the 1920s or ’30s, for example, kitchens were traditionally closed. Here, we have open kitchens. Had we adhered strictly to the historical, that wouldn’t have been done.”

The open kitchen, which has its own skylight.  Photography by Travis Mark

Instead, the kitchen brings the Woolworth legacy into the room in a different way: An overhead skylight that looks up to the building’s instantly recognizable crown. It sits just next to the massive great room, which boasts Dorya furnishings, a baby grand and scads of space for entertaining. A spiral staircase in the center leads to a small upstairs alcove, which is staged as a meditation nook for finding your zen.

As the unit is perched on the Woolworth’s first setback, it has an expansive, built-in duplex terrace of 2,770 square feet, furnished with outdoor pieces from Janus et Cie. Walking through the bedroom wing, which is down the hall from the great room and attached living room, each of the four bedrooms—the residence has five in total, with another guest suite at the apartment’s opposite end—has access to this private exterior, affording views of midtown, the World Trade Center and (of course) the intricate terra-cotta façade above.

The master bedroom’s centerpiece is a jaw-dropping Baccarat chandelier balanced another work of art by Christopher Guy.  A walk-in closet and private bathroom complete the suite. The home has four full baths and two powder rooms, in total.

The amenities serve up plenty of nostalgia. The pool, for example, was modeled after original photographs from the 1920s—a time when Woolworth himself would allegedly emerge from his office to take a quick dip—reimagined with all the glamor and conveniences modern buyers have come to expect of a private swimming spot. A chilled wine cellar, fitness room, and private dining and meeting rooms are also included.

The master bedroom has a spectacular chandelier from Baccarat.  Photography by Travis Mark

Which all begs the question—who’s going to move in? “All of our buyers so far are New Yorkers,” says listing agent Joshua Judge of Sotheby’s. “It’s the only building I’ve ever worked on for which I can say that. But everyone has a New York Woolworth story. They had an aunt who worked here, or someone sent them a postcard from the observatory. I haven’t gotten tired of hearing them yet.”