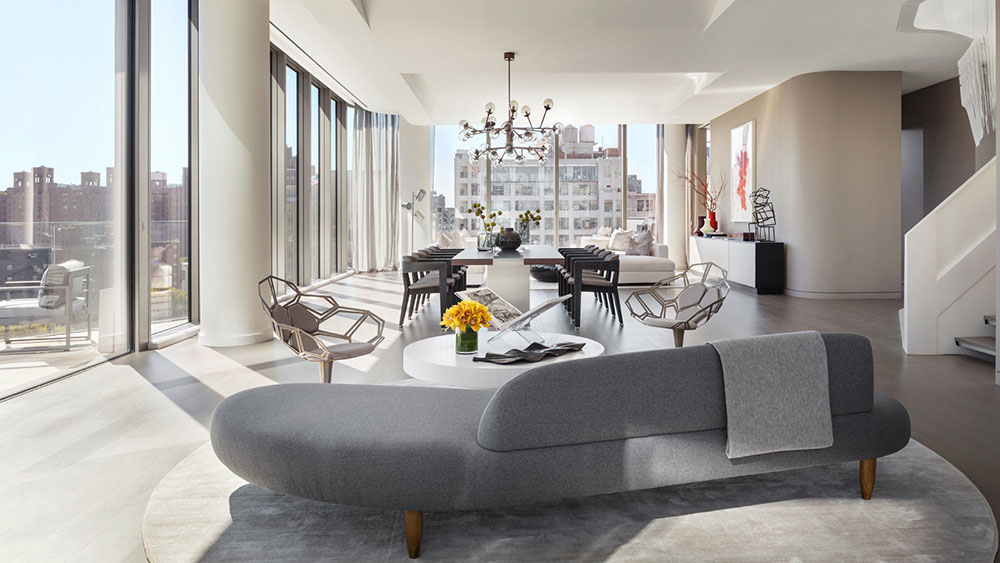 A spectacular three-level, 11,000-square-foot Manhattan penthouse, designed inside and out by “The Queen of Curves,” the late starchitect dame Zaha Hadid, is back on the market, with a $10 million price shave, for $48.75 million.

Sprawling across the top of the stunning 39-unit 520 West 28th St. building in New York’s booming West Chelsea district, the triplex is the only Zaha Hadid-designed condo in the Big Apple.

Among its multitude of jaw-dropping features; a wrap-around 3,892 square-feet roof-top terrace—big enough, according to the Corcoran Group listing, to have 100 friends over for cocktails. While sipping, they’ll enjoy to-die-for views of the Chelsea skyline, the Empire State Building, the High Line and Hudson Yards.

Completed four years ago, the light-infused apartment is made up of two penthouses, with the three floors connected by a breathtaking, centerpiece spiraling staircase.

Hadid’s trademark curves flow throughout the apartment; from the quirky bathroom and study windows, to the spectacular curved glass of the rooftop atrium, to the kitchen’s sculpted center isle.

The middle level of the unit features a 1,900-square-foot great room with floor-to-ceiling walls of glass on three sides, a private balcony and fireplace. In addition, there’s a separate library and media room. This floor also features four en-suite bedrooms.

The lower level of the apartment includes a master suite, again with its own balcony, separate dressing rooms and cavernous closets, plus two additional bedrooms bringing the total to seven.

While it might be hard for an owner to find reasons to ever leave this spectacular home, the building itself—also the work of Hadid—comes with an array of interesting amenities.

Amenities include an indoor pool  Photo: Courtesy of Corcoran Group

The building also includes a drive-in garage with press-a-button robotic parking system and secure off-street parking. There are also storage vaults for valuables, with a private viewing room. The entire lobby with its dramatic curves is nothing less than a work of art.

520 West 28th St. is only the second residential building in the US designed by Hadid, the Pritzker Prize-winning Iraqi-British architect who died in 2016 at age 65. The other is the iconic 62-story One Thousand Museum high-rise in downtown Miami.

Listing agent Corcoran tested the market for the triplex last fall with a $58.5 million asking price. With no takers, it’s now been re-listed for a no less eye-watering $48.75 million.