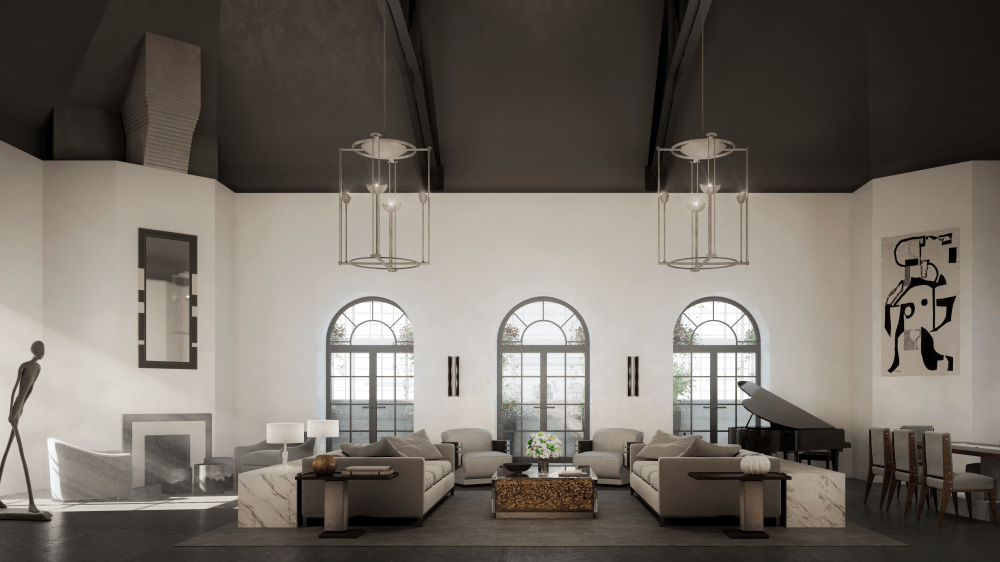 Studio Sofield’s vision for the Landmark Penthouse at 111 West 57th.

A registered historic and cultural landmark, the building first opened its doors in 1925 to a performance from the New York Philharmonic. It operated as both concert venue and Steinway & Sons headquarters until 2013, when the German piano manufacturer sold the space to JDS Development, Spruce Capital Partners and Property Markets Group. The trio then plotted a building that would stand out, even on Billionaire’s Row, one with interior architecture by Studio Sofield.

And for Bill Sofield, founder of his eponymous firm, the union felt like a serendipitous one. “I didn’t think I had a choice,” he tells Robb Report. “I was born on March 11th. So, the number one, three times: 111.”

In addition to designing the penthouse itself, Sofield—himself a designer favorite of brands from Harry Winston to Tom Ford—also reimagined the original lobby as a sort of utopian scene. Silver and gold leaf elephants escape the Central Park Zoo in one mural, and ebony trees stretch their branches to the lobby’s South Oval dome in another—together, the materials pay homage to the building’s piano concerto past. “Old New York buildings have all these quirks or secret jokes that no one knows about,” Sofield adds. “That’s what I wanted to recreate. It has personality.”

The kitchen.  Photography by Peter Murdock

But the main attraction is the jaw-dropping great room, which boasts 26-foot vaulted ceilings, with arched glass doors that open on to a 1,000-square-foot wraparound terrace. The master suite, up a custom staircase, opens onto its own 2,500-square-foot terrace. The all-marble master bath, meanwhile, features white onyx finishes, a freestanding nickel tub by William Holland and custom bronze hardware by P.E. Guerin.

The bathroom.  Photography by Peter Murdock

“People often ask what luxury means to me—I say it’s being considered. It’s not necessarily cashmere, or a small chopped salad of hummingbird’s tongues. It’s about what individuals feel is important to them,” Sofield says. “That somebody’s listening.”