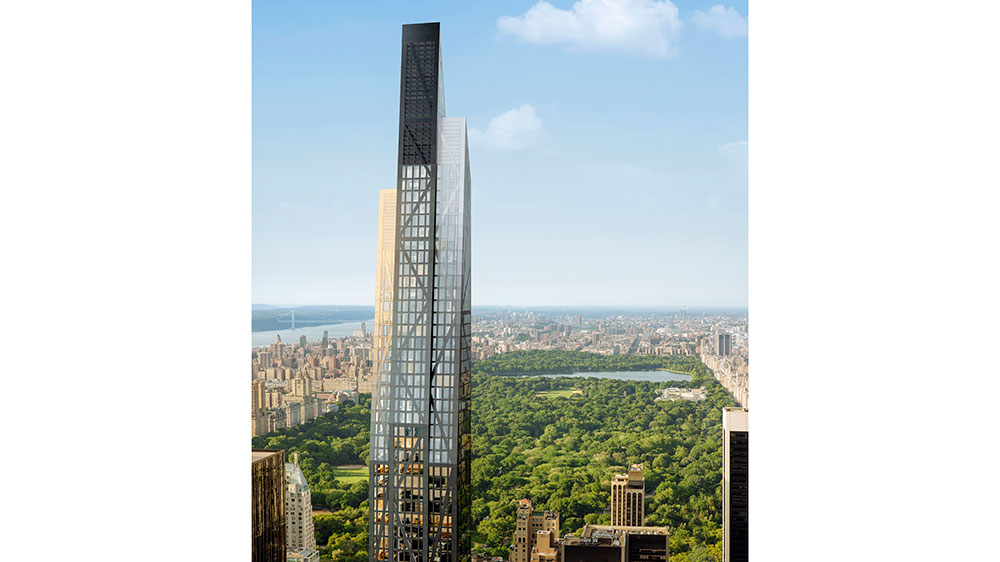 Ever wanted to live in a world-class art museum? Now you can—sort of.

53 West 53, a new residential tower built directly above New York City’s renowned MoMA, will give you the next best thing to a bona fide Night at the Museum experience. Designed by Jean Nouvel, the residential skyscraper features an exposed diagrid exterior, with asymmetrical metal lines spiderwebbing across its façade. And while the 1,050-foot structure has effectively emblazoned itself across New York City’s skyline, its interiors have remained largely out of the public eye—until now.

Inspired by its museum adjacency—three levels of under construction gallery space will be integrated into 53 West 53 upon their Fall 2019 completion—developers Hines, Goldman Sachs Investment Group and Pontiac Land Group commissioned André Fu to craft the building’s first model residency. It’s an exciting turn for the renowned designer, as the space marks Fu’s first project in North America, after building an impressive resumé of hospitality projects such as the Upper House and the St. Regis in his native Hong Kong.

Stepping into the $6.4 million condo, the artistic influences are clear. With two bedrooms and two and a half baths, the 2,039-square-foot space is one of 145 in the building. But because of the supertall’s diagrid exterior, no two residences in 53 West 53 are the same. Crisp, angular lines run along windows and beside walls. Fu creates a dialogue with the diagrid’s lines in the pieces curated for the model, many of which are part of his own lifestyle brand, André Fu Living. (The new venture debuted 150 pieces—porcelains, carpets, furniture and more—in Milan this past April.)

“The context of MoMA was very attractive,” Fu told Robb Report of his decision to take on the project. “As was Jean Nouvel’s architecture. The building has a sort of artisan quality to it, which I find very interesting.”

The kitchen, which was designed by Thierry Despont.  Photography by Stephen Kent Johnson

A simple sculptural screen in the living room, for example, mimics the design elements of the skyscraper itself. A bench in one of the bedrooms’ interlocking legs play with the stark lines of the diagrid just adjacent to it at the window. Ten pieces of art curated by Gallery Perrotin (a longtime collaborator of Fu’s) tie the space together.

“We’re speaking with an audience that’s travelled the world. This is likely their second or third home,” adds Fu. “It felt natural to bring in my own language of luxury. It’s more relaxing, it’s more calming… more a sense of comfort.”

Should your love or art drive this purchase, a MoMA membership comes complimentary—as do other curated museum benefits available only to residents. The building will also be able to host the occasional shindig in MoMA’s much-loved sculpture garden. Still, if it’s Fu’s residence you’re eyeing, staying in and enjoying the in-house Park Seo-Bo painting might be just as worthwhile.