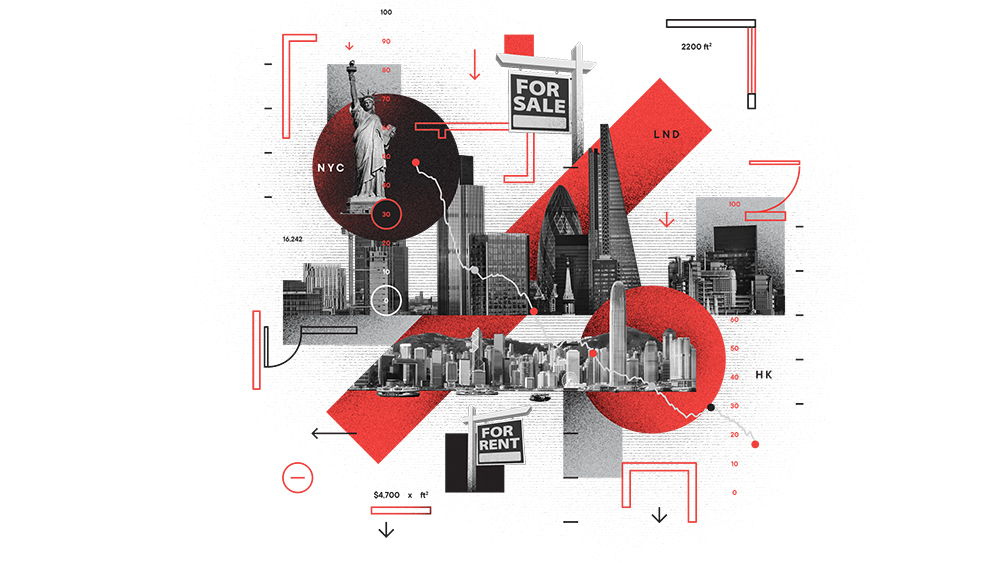 A sense of gloom hangs in the air. “Bloodbath,” “free fall” and “slump” were just some of the choice idioms deployed by headline writers to describe the New York real estate market during the twilight of 2019. Across the pond, townhouses in central London—long the favored investment vehicle for billionaires from Bahrain to Belarus—have lost 20 percent of their value in a five-year nosedive. Worldwide, according to Savills, a global property consultancy, “everything is trending to zero.”

“This is not a normal cycle,” says Frederick Peters, CEO of Warburg Realty. Even after the global financial crisis, luxury property prices in the world’s capitals recovered fully within two years and went on to smash all records. This time round, brokers and analysts agree, it’s different.

So what lies ahead for 2020? “There’s a saying in New York real estate,” says Julie Pham, a Manhattan penthouse specialist: “If you buy and can live there for five years, you can ride out any downturn.” Of course, those with skin in the game like to talk up the market. But historically, they’ve been correct. In London, house prices ballooned by 449 percent in the 20 years preceding 2017. In Hong Kong, luxury apartments now cost $4,700 per square foot. Manhattan has seen median condo prices rise 300 percent between 1999 and 2017.

Now the highest end of the market is in trouble. The average price of a luxury home in Manhattan fell by 21 percent in Q3 of 2019, compared to the previous quarter, according to Douglas Elliman, New York’s largest brokerage.

A leading cause has been overdevelopment. More than a quarter of the 16,242 new condos built in Manhattan since 2013 remain unsold, according to StreetEasy, a listings site. And on they come, like an ever-rolling stream: 5,000-plus units across 63 buildings are still under construction. In the financial district, a new tower at 125 Greenwich Street is facing foreclosure proceedings after defaulting on its debt. New York City foreclosures rose by 118 percent from last January to October.

One Manhattan Square, an 815-unit monolith that looms over the Lower East Side, has become a symbol of the city’s condo glut. Struggling to sell, it has offered a series of perks, including 10 free years of common charges for buyers and a lease-to-own scheme that deducts a year’s rent from a future purchase. Its lavish amenities, which include an adult tree house, a putting green and a cigar room, now look like peak bubble.

This slowdown is “radically different” from the sharp crash of 2009, says Peters. “This has been a gradual letting of air out of the tires. If you had invested in the stock market over the last four years, you would have kicked a lot more ass than in real estate.” He does not expect a quick recovery. Michael Franco, a broker at Compass, agrees: “I don’t see this market turning around and prices starting to climb back up in 2020.”

Across the rest of the US, the picture is mixed. Condo prices in the exclusive southern tip of Miami Beach fell by 18 percent in the third quarter of 2019, compared to the third quarter the previous year, according to Brown Harris Stevens, a luxury real estate brokerage, and condos on ultra-exclusive Fisher Island lost almost half their value. But the West Coast looks a little rosier—if you don’t mind the risk of fire. In Los Angeles and San Francisco, where housing development is more restricted, prices have been holding up because of a “shortage of homes and the strong local economy,” says Ed Kaminsky, a realtor at Strand Hill in Southern California. But even there caution is setting in, he says: “Global and political uncertainty causes buyers pause. In Palo Alto and Silicon Valley, in 2016, any seller could put any price on any house and there would be five or six buyers. Now buyers come in low and don’t budge.”

New regulations are also likely to weigh down recovery. In 2017, President Trump capped the amount of state and local taxes that homeowners can deduct from their federal tax returns. New Yorkers have also been hit by a rise in transfer taxes and a new mansion tax that starts at one percent on transactions over $1 million. And Democratic state legislators are pushing for even more with a law that would allow New York City to impose a so-called pied-à-terre tax, an annual levy on nonprimary homes that are worth more than $5 million.

Rising property taxes aren’t confined to the US. Overseas, foreign buyers must now cough up 10 percent or more in Sydney, 20 percent in Singapore and an eye-watering 30 percent in Hong Kong. In 2014, a climb in UK transfer taxes put a halt to an extraordinary run in which luxury London homes surged in value by 66 percent in five years. Prices have been plummeting ever since, compounded in 2016 by the shock Brexit vote.

“We’ve had a significant adjustment,” says Liam Bailey, global head of research at Knight Frank, a real estate agency. “Dubai, New York and Hong Kong have seen prices fall but not as much as London, which is down 20 to 30 percent.” He expects 2020 to bring increased political stability and the return of buyers to London: “If we look at the total spending power of buyers registered with us, we have firepower of £55 billion in central London. There is significant money to be deployed.”

But he does not predict a return to the heady price inflation that was once the favorite topic of conversation at London dinner parties: “Normally, once people start buying, a recovery follows and then a period of frothy prices. But I don’t think we will see a big uptick because pricing is still high by historic standards.”

Lucian Cook, Savills’ director of residential research, forecasts price increases of 3 percent in 2020, “a weaker recovery than in previous cycles,” he says, partly because “London has matured as a global city and financial center.”

If residential real estate in leading business capitals is perceived to have peaked, resulting in a dip in speculative investment, this represents a major shift in short-term profit expectations for brokers, developers and home sellers. Real estate investment has traditionally been a long game. Only in the last few decades has it become a way to profit in the short run. So some see this flattening as a market correction and a welcome return to more predictable, slow growth.

These days, Peters says, “people aren’t buying for investment but rather because they’re users. Anybody entertaining the notion that you’re going to buy and turn it around for a profit in two to three years has left the marketplace. We’re not going to see flipping for a long time.”

Camilla Dell, founder of Black Brick, a London buying agency, says the future for real estate in mature global metropolises should be seen as a long-term hedge against riskier investments rather than the quick money-spinner it once was: “There will always be high-net-worth individuals who make their wealth in high-risk emerging markets who want to diversify their wealth to a less risky place.”

Where to seek higher returns? Dollar buyers currently enjoy a discount of more than 30 percent in the luxury London market because of value drops since 2014 and a weak pound. Globally, the growth in luxury house prices was flat last year in many cities, but some European capitals are benefiting from Britain’s Brexit self- sabotage. Prime residential property in Berlin and Paris saw values increase by 8.2 and 7.6 percent, respectively, last year, a trend anticipated to continue this year. “They look cheap compared to other locations,” says Sophie Chick, Savills’ director of world research, who also tips Spanish cities for price growth.

In the US, brokers foresee ongoing political turmoil throughout 2020. Franco expects November’s general election to be “the most highly contested in the history of our country.” The reelection of President Trump would ensure further unpredictability, while a Sanders or Warren presidency could bring wealth taxes.

In Britain, as Robb Report went to press, analysts forecast a Conservative majority government and an early Brexit deal. But the next most likely scenario is a coalition led by Labour, whose leader favors nationalization and wealth taxes. Then, says Black Brick’s Dell, “no one will want to invest in London, no matter how cheap the currency is.”

We are in a world of Rumsfeldian known unknowns. Not to mention the unknown unknowns. “There are a lot of spinning plates right now—nationally and internationally—and it’s difficult to predict which will totter or crash,” says Carlisle.

What we do know is that a combination of populist politics, rising global insecurity, aggressive taxation and overdevelopment has killed the luxury condo as a short-term investment. While some might sense a buyer’s market, most brokers believe that, when buyers do return, they will be looking for a home rather than a quick buck. “Double-digit growth is a thing of the past,” says Dell. “Those days are gone.”