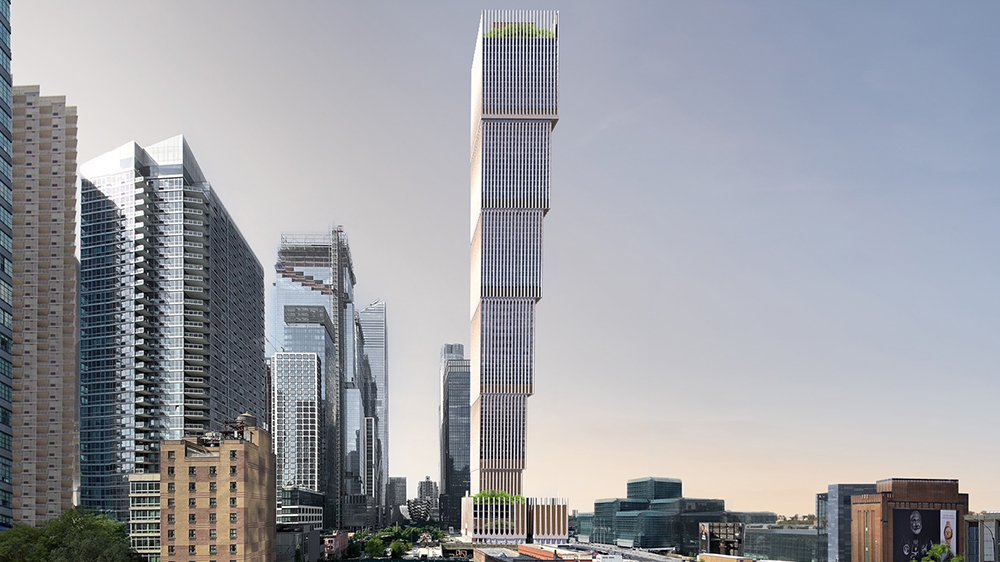 Sir David Adjaye wants to flip the script with his next New York highrise.

The Ghanaian-British architect has just unveiled a proposal for an upside-down skyscraper called The Affirmation Tower. The soaring building, which would be located on Manhattan’s west side, would also be one of the city’s tallest building.

The supertall building—which has been proposed for Site K, a lot only blocks from Hudson Yards and the High Line—features a unique inverted design that gives it the impression of having been built upside down. The building cantilevers out five times from its base, with each progressive level bigger than the last. It looks almost like a stepped block tower, with the smallest on the bottom and the largest on top.

A rendering of The Affirmation Tower  The Peebles Corporation

As unorthodox as the design may be, it’s far from The Affirmation Tower’s only notable attribute. The completed tower would also stand at an imposing 1,633 feet. Technically, that makes it the second tallest building by crown height—which accounts for total height, including any crown or spire on top of a structure—in New York and all of the Western Hemisphere trailing only One World Trade Center. But Affirmation Tower’s roof height of 1,553 feet would be unmatched. Out of respect for what One World Trade Center represents, the team behind the proposal has chosen to frame it as Manhattan’s second tallest building.

In addition to Adjaye, the team behind the proposal also includes the Peebles Corporation, the McKissack Group, Exact Capital and Steven Witkoff. If the project moves forward, it will be the first building in New York City constructed by a team of Black architects, developers, lenders and builders, according to a press release from the group. In addition to two hotels and office space, the building would also play host to the headquarters of the NAACP’s Mid-Manhattan branch.

“This project is emblematic of true equity in development,” Don Peebles, CEO The Peebles Corporation, said in a statement. “A symbol for all who visit New York, cementing in brick and mortar that New York is serious about economic inclusion.”

The Affirmation Tower would be Adjaye’s second Manhattan skyscraper, following the residential tower 130 William. With its height and design, it’s clear that the starchitect has no interest in simply repeating himself for his next project in the Big Apple.