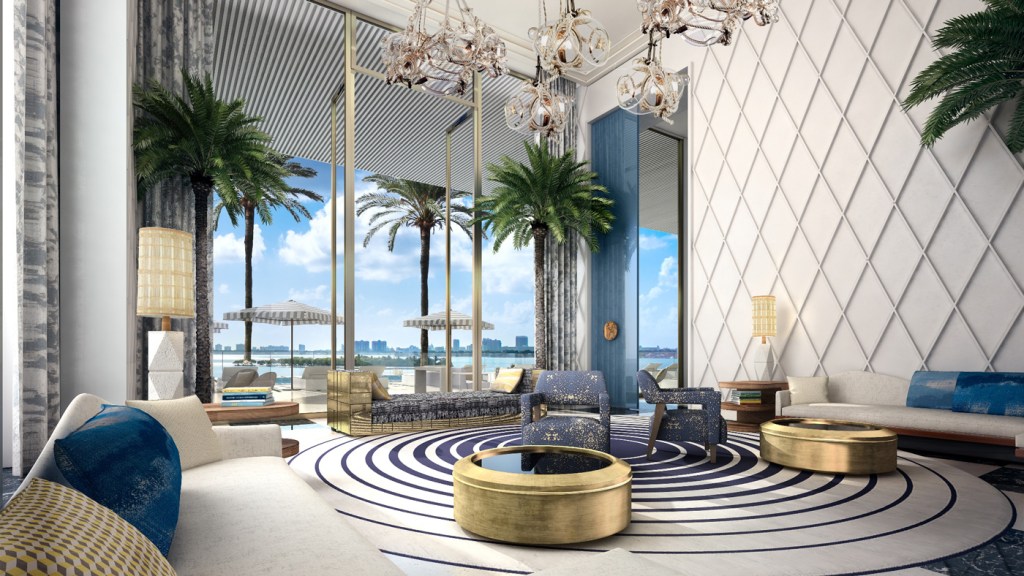 South Florida–based firm Two Roads Development has officially broken ground on Elysee, a 57-story glass tower in Miami’s East Edgewater neighborhood. Designed by Bernardo Fort-Brescia of Arquitectonica with interiors by French designer Jean-Louis Deniot, Elysee will be the tallest residential tower in East Edgewater once it is completed in 2019. “This building is a monument to functional rationality that at first sight feels daring and whimsical,” Fort-Brescia says of his inspiration for the striking tiered building. “The 57-story reverse ziggurat form follows the building’s function—with smaller apartments below and larger ones above, all with maximized views to the bay and sky—resulting in an unexpected and distinctive addition to the skyline.”

Positioned along Biscayne Bay at 788 NE 23rd Street (near Two Roads Development’s Biscayne Beach), the 57-story condominium will include 100 three- to five-bedroom units ranging from 2,300 to 4,000 square feet.

Each of the half-floor residences call for 10- to 12-foot ceilings, private elevators and foyers, and gourmet kitchens with Sub-Zero appliances. Sizable east- and west-facing terraces are designed to give owners 180-degree panoramas of the city and bay, while walls of glass ensure that the layouts will function as sun-drenched sanctuaries.

On-site amenities include a swimming pool and adjacent refreshment bar, an outdoor kitchen and barbecue station, a spa, a blow-dry bar, a children’s playroom, a fitness center, a library, a wine room, a professional-grade chef’s kitchen, a 30-person dining room, and a yoga studio.

“We are thrilled that our second East Edgewater project is underway,” says Reid Boren, managing partner of Two Roads Development. “The market response to Elysee—even before the first shovel was in the ground—speaks to the strong demand for ultra-luxury living that is on the waterfront but also conveniently close to Miami’s urban core.”

Prices range from around $1.5 million to more than $10 million. Cervera Real Estate is handling sales and marketing for the project.