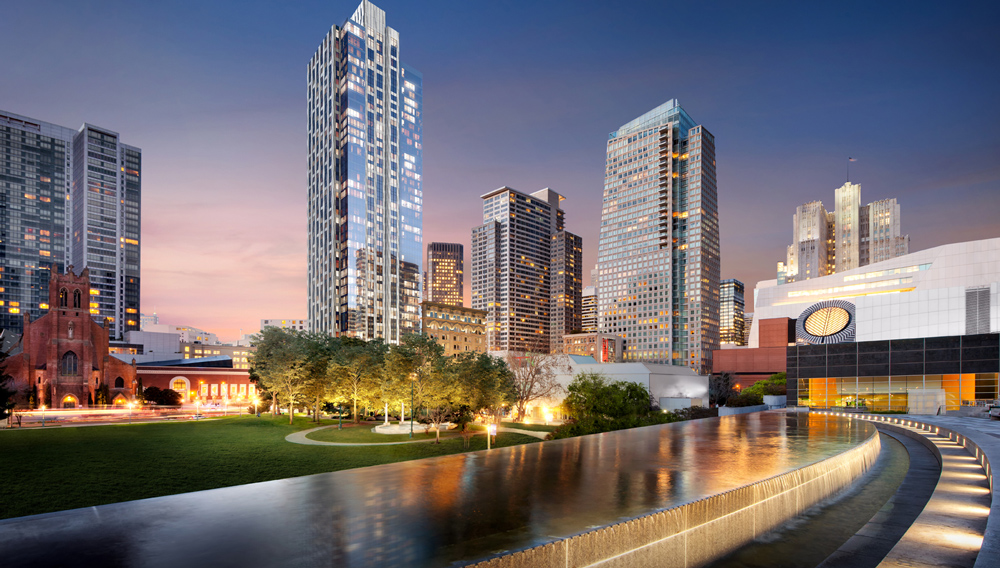 Toward the end of the 20th century, a slew of destination resorts began building private residences: Four Seasons unveiled its first resort with residences in 1996 in Nevis, and Ritz-Carlton followed suit by debuting a project in Miami in 2001. In addition to its private residences at resorts, Four Seasons has announced four stand-alone private residential projects in Los Angeles, Marrakech, London, and—most recently—San Francisco.

Four Seasons Private Residences at 706 Mission Street, San Francisco, will be located in the heart of the city, in the trendy Yerba Buena cultural arts district. Developed by 706 Mission Street Co. LLC, the 146 residences will be situated within two adjacent towers with views of Jessie Square. One of those towers will be the newly renovated Aronson Building, a 43-story structure originally constructed in 1903, which will also house the Mexican Museum on the ground floor. The other is a new 45-story tower built from stone and glass.

To give the exteriors of both buildings an artistic flair worthy of the surrounding neighborhood, 706 Mission Street Co. LLC was determined to mingle the modernity of one tower with the historical elegance of the other. The repurposed and restored brick facade of the Aronson Building is receiving reworked terra-cotta materials throughout and refurbished wood sash windows. The ultramodern new building, with a private drive court on Third Street, will house 128 of the Four Seasons private residences and feature alternating volumes of vertical masonry and glass.

The two- to four-bedroom residences—from 2,800 square feet to more than 4,000 square feet—along with a projected 11 penthouse units, will have interiors designed by Handel Architects. Impressive living areas, home offices, stone countertops, premium kitchen appliances, and floor-to-ceiling windows will distinguish the chic residences. A number of lavish amenities for owners can be accessed on the fifth level, including a private dining and tasting room, fitness center, cozy lounge complete with a bar and fireplace, and an impeccably landscaped outdoor terrace.

According to Matthew Kenney of 706 Mission Street Co. LLC, prices are estimated to begin at around $2.5 million for residences and $15 million for penthouses. The project is on track to be completed in 2020.