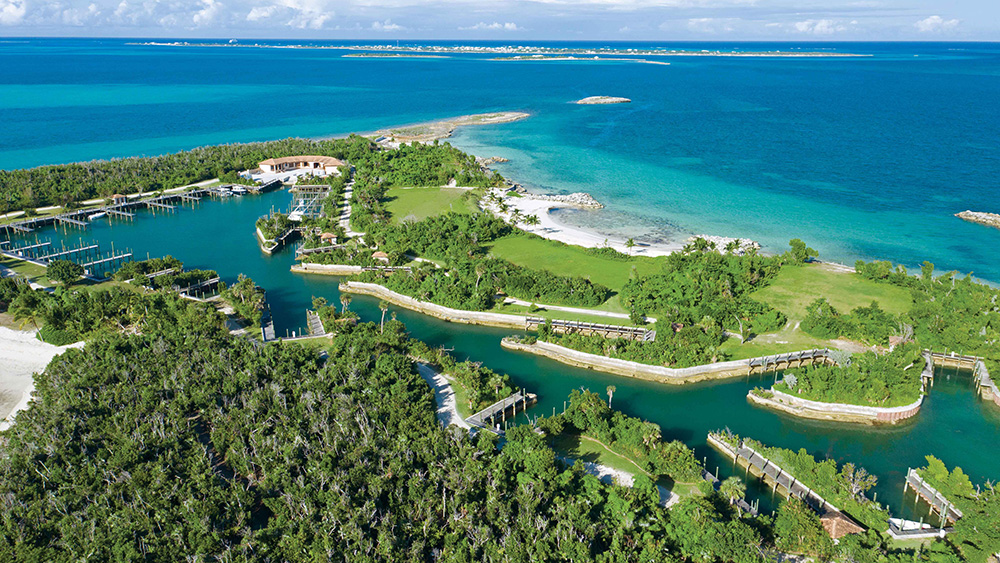 Legend has it there’s a treasure trove of silver pieces of eight buried on a tiny castaway island just off Marsh Harbour in the Bahamas. Back in the 1700s, one of the original, swashbuckling pirates of the Caribbean, Matthew Lowe, hung out here, giving the island its centuries-old name of Matt Lowe Cay.

According to Bahamian folklore, in 1715 Lowe and two of his dastardly fellow pirates, seized a Spanish galleon carrying over 11,000 pieces of eight. Much of the treasure is said to be still unaccounted for. Where’s it hidden? All clues point to Matt Lowe Cay.

Fact, or more likely fiction, it’s guaranteed to be a story that lucky homeowners at Montage Hotels & Resorts’ new Montage Cay development will be telling their kids before sending them off on a treasure hunt.

Now, after months of planning, Montage is releasing the first seven, out of a total of 26, “estate” home lots, each around half an acre, each with jaw-dropping views of the turquoise waters of the Sea of Abaco, each priced from the “low three millions.”

When the ambitious development is complete—reckon on the end of 2023—it will feature a 50-suite Montage hotel and spa, an array of restaurants and bars, fitness center, swimming pools, tennis and pickleball courts, with a big focus on health and wellness. Kids will no doubt get free spades for treasure digs.

“There aren’t too many 53-acre islands in the Bahamas with seven beaches and their own marina. Plus the water here is so blue you could be in the Maldives, yet you’re less than an hour from Florida,” Tina Necrason, EVP of Residential for Montage International tells Robb Report.

Location is one of the key attractions of the island, she explains. Positioned less than a mile, and a 10-minute boat ride, from Marsh Harbour on Great Abaco Island, it’s also a quick 45-minute flight to Leonard M. Thompson International from Fort Lauderdale, Palm Beach or Miami airports.

One of the estate homesites.  Photo: Courtesy of Montage Hotels & Resorts

Flying in by helicopter or seaplane? Montage Cay will have its own helicopter landing pad and seaplane dock. Bringing your own boat? Tie-up right behind your home; the marina can accommodate vessels up to 110 feet.

Those first lots are being designed to accommodate everything from a four-bedroom, four-bath 4,780-square-foot home with 1,265-square-feet of outdoor terracing, to a six-bedroom, six-bath residence with close to 6,000 square feet of interior space and 1,640 square-feet of terraces.

Pricing, according to Necrason will depend on the depth of the buyer’s pockets and their vision, though a guideline of $5 million and up is what it should take to build a home of their dreams.

Our pick for Home of the Week: The stunning, end-of-the-cul-de-sac E2 lot on the elevated western end of the island, overlooking Turtle Beach. Cost is upwards of $7 million for the lot and another $7 million to build a lavish six-bed, 6,000-square-foot home on it.

Looking for something a little smaller? In addition to those 26 estate homes, Montage is planning around 20 villa homes, with designs and pricing yet to be decided.

An example of a primary bedroom suite.  Photo: Courtesy of Montage Hotels & Resorts

“We’ll offer buyers a number of plans, but the homes and home sites will be totally customizable for buyers,” says Necrason.

Montage is working with South Florida architect OBMI for the exteriors and DesignAgency for the interior design.

A bonus of OBMI’s involvement is that the company has expertise in designing hurricane-resistant homes. That’s key after Cat 5 Hurricane Dorian devastated the Abacos in 2019 with winds up to 185 mph.

A rendering of what one of the custom estate homes might look like.  Photo: Courtesy of Montage Hotels & Resorts

Over the past decade, the reef-fringed island has attracted the attention of a number of developers and investors. In 2001, it was sold to Abaco locals Chris Thompson and David Devanney who developed the canal and boat slips and built a number of small homes.

Then in September 2015, the island was sold to Michael Shvo’s New York-based SHVO real estate development company with a plan to build a $100 million Aman Resort. It never proceeded.

Now with Montage firmly involved, the former pirate’s hideout looks to have an assured future.

Get the kids to dig up Matt Lowe’s treasure, and you’ll be good for spa treatments for an entire year.