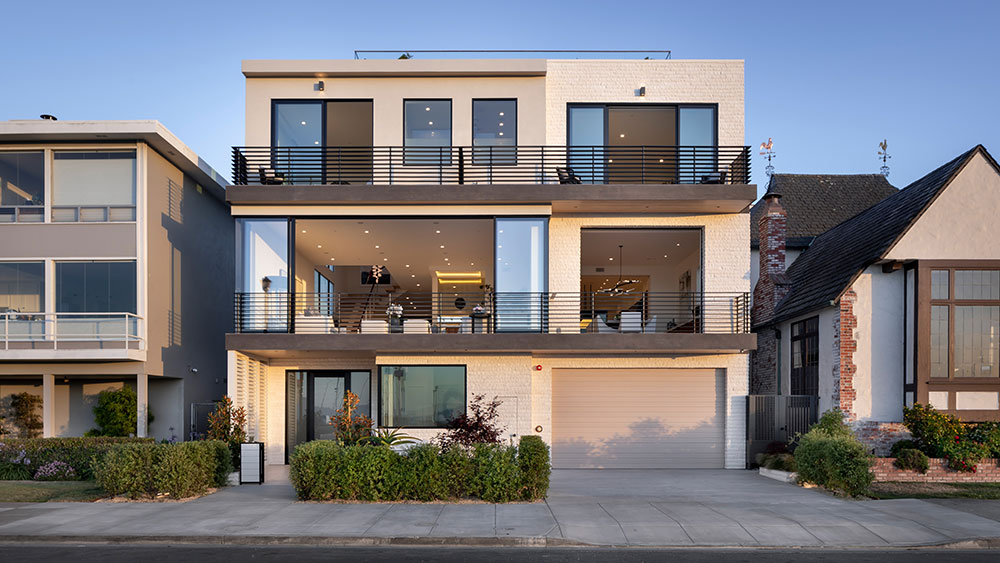 IMAX views of San Francisco Bay from the roof deck don’t come more awe-inspiring than these. Over to the left, the iconic Golden Gate Bridge and Presidio. Straight ahead, Alcatraz and Marin County. And to the right, the East Bay and the skyscrapers of downtown.

Kick back in front of the firepit with a glass of Napa’s finest and soak in the ever-changing scenery. From the nautical action in the marina right across the street, to the mist rolling in and out of the Bay, to the setting sun over Mount Tamalpais.

“The roof deck is just the most spectacular place to host guests and soak in the iconic sights of San Francisco and the Bay,” explains real estate developer and passionate sailor, Manouch Moshayedi.

Back in 2014, Moshayedi and his wife Sophie were looking for a weekend getaway in San Francisco’s Marina District to be close to the city’s sailing action. They’re members of the city’s 93-year-old St. Francis Yacht Club and Moshayedi owns and races his stealthy, black, 100-foot supermaxi yacht, Rio.

They found a tear-down on Marina Blvd. within strolling distance of the yacht club, paid $5.4 million for the property and proceeded to build this three-story, 7,000-square-foot, five-bedroom coastal-modern showpiece.

Designed by Vin Léger of acclaimed Bay Area architects EAG Studio, the home sits on an extra-wide 50-foot lot and features walls of glass doors on all three floors for ultimate indoor-outdoor living and viewing.

The entire interior is anchored by a spectacular floating wood staircase with a nautical-inspired balustrade that incorporates the kind of wire rope seen in yacht rigging. Alongside it is a three-story wall of opaque glass with a graphic of a billowing sail etched into it.

An entry off often traffic-snarled Marina Boulevard leads into the first level with its four-car garage and EV charging, home office and fifth bedroom. But the highlight here is the huge projection screening room with pocket glass doors that open out to a terrace with fire pit, outdoor kitchen and barbecue.

Climb the stairs, or take the elevator, to the vast, second floor with its wall of floor-to-ceiling doors and sprawling, open-plan living area. On the Bay side there’s a 25 x 25 foot living room that flows into the open dining area with a walk-out balcony for that sunset digestif.

At the opposite end is the family room with more glass pocket doors and a balcony, along with the airy, state-of-the-art, dine-in kitchen.

The staircase is a centerpiece in the home.  Photo: Jacob Elliott

Level three is for sleeping and lounging, with the spacious Bay-front master—with, you guessed, more floor-to-ceiling glass panels—dual bathrooms, a steam room, freestanding tub, dual walk-in closets plus a balcony. Three more ensuite bedrooms live on this floor, each with their own balcony and walk-in closets featuring California Closets fixtures.

The Moshayedis are spending more time at their Laguna Beach home south of Los Angeles and less time in the Bay Area, so they have decided to sell. Laguna is also where Moshayedi headquarters his real estate development company, Mx3 Ventures that he runs with his brothers.

In addition to his sailing adventures, Moshayedi is perhaps best-known for co-founding the computer storage device maker sTec Inc. that he sold to Western Digital in 2013 for a reported $340 million.

More recently, in the height of the recession in 2010, Mx3 Ventures snapped up the 380,000-square-foot Shoppes at Chino Hills complex for a fire-sale $95 million. Five years later, they off-loaded it for $147 million—a handy $52 million profit.

The Moshayedis’ daughter and Compass real estate agent Camilla Moshayedi holds the listing for her parents’ Marina Blvd. home. That might make for some tough negotiating.

The terraces are a seamless part of the home.  Photo: Jacob Elliott