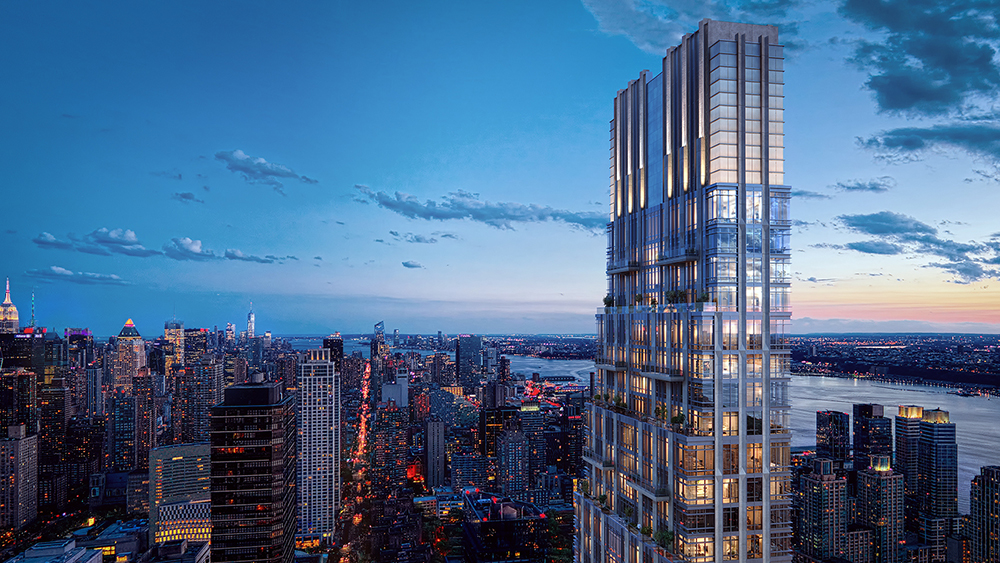 When you think of Manhattan’s skyline, you assume it’s a static thing, already complete—it’s pretty spectacular as it is, after all. But ingenious architects and clever developers are keeping it fluid, creating new landmarks to reinvigorate the city. And SJP Properties’ latest development on the Upper West Side—200 Amsterdam—is proof. Well, it will be once it’s final next fall.

The soaring 52-story structure, located in the heart of Lincoln Square, one-ups the Upper West Side’s already rich architectural history: The tower is approximately 668 feet tall, now the tallest residential building in the neighborhood. The handiwork of Boston-based architectural firm Elkus Manfredi, the Art Deco-inspired façade features a mix of glass and masonry, with detailing on the top, and cascading levels on one side to maximize sunlight and pay homage to its prewar predecessors. Rather than reinvent the wheel, the firm has rolled with it, adding a few spokes of contemporary innovation along the way. Founding principal David P. Manfredi describes it as a building “to see and be seen.”

He’s not wrong. The building is as equally impressive on-foot at street level as it is indoors. From the top floor, two things become clear: The layout is spacious, and the panorama is one of the best in the city. When complete, the complex will house 112 expansive condos in total, from generous one-bedrooms (starting at approximately $2.65 million) to two luxurious duplex penthouses.

Priced at around $40 million, the penthouses each span 6,325 square feet; one covers the entire 49th and 50th floors, while the other covers the 51st and 52nd. Those homes, and another eight full-floor units below them, offer 360-degree views of New York: There’s Central Park to one side and the Hudson to the other. On a recent hard-hat tour of the space, I could spot Lady Liberty in the distance, as well as the George Washington Bridge. But even the first-floor condos are fitted with floor-to-ceiling windows that have their own compelling views.

It’s bare concrete and scaffolding now, but the interiors will be brought to life by design firm CetraRuddy. Each condo will have all of the expected modern amenities—premium Miele appliances, wine fridges, double sinks and pendant lights—but it’s all about the details. The marble in the kitchens and bathrooms was sourced from Italy, while the white oak floors were imported from the South of France—principal Nancy J. Ruddy selected the 130-year-old trees herself—and will be laid in a herringbone pattern that is typical of Upper West Side buildings.

The residences will be also connected to the neighborhood by capitalizing on and partnering with its unique offerings: Residents will enjoy a complimentary year membership at Lincoln Center for the Performing Arts, which is a leisurely six-minute stroll away. Thoughtful common amenities address the needs of nearly every potential dweller: There’s a soundproofed rehearsal room for musicians and creatives, a 75-foot saltwater pool, sauna and meditation rooms, a state-of-the-art fitness center with Pilates and yoga studios, a library with grand piano, children’s playroom and even a golf simulator.

So far, construction has been on time and within budget—unusual, we know—and apartments are now on sale through Brown Harris Stevens. Check out some more pictures of 200 Amsterdam below.