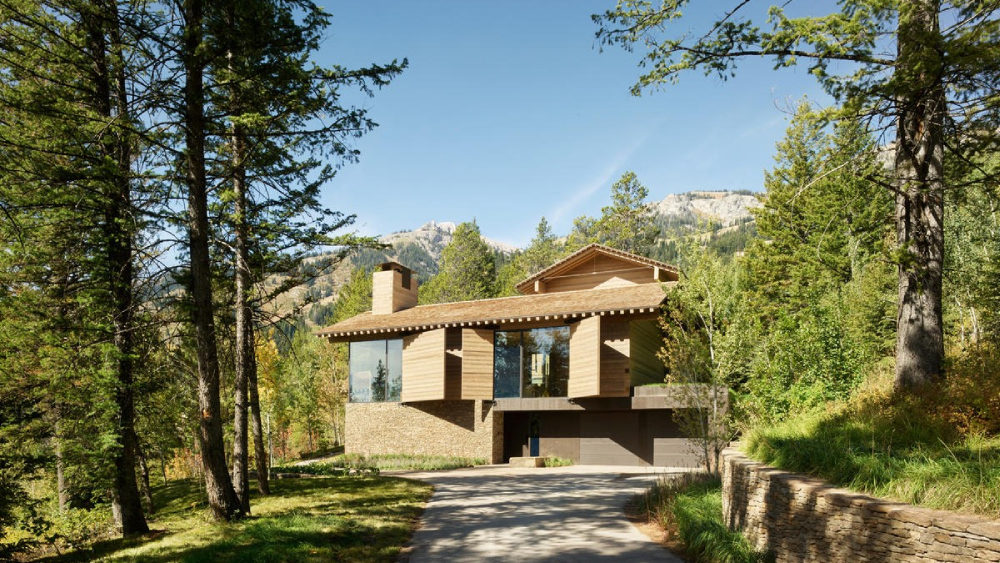 If there’s anything design has taught us in recent years, it’s that––among a certain set––customization is king. But that philosophy has just been taken to the next logical step: home itself.

Designed and built by Seattle-based firm Olson Kundig, the Teton House is located in that Western stronghold of rugged luxury, Jackson Hole, Wyoming. Surrounded by an expansive mountainscape, the 8,050-square-foot modern structure has a wood plank exterior resting atop a stone wall and concrete garage on the lowest level. Large wooden shutters above each window––which operate via a pulley system––lower and raise so the amount of natural light (and sweeping view) that enters is up to the occupant.

“The house is a platform for the extreme experiences possible in a mountain climate––it acts as a preamble to the natural landscape just outside,” Tom Kundig, Olson Kundig design principal, told Dezeen.

The snow-covered exterior of Teton House in Jackson Hole.  Courtesy of Olson Kundig

With nature and the kinds of outdoor winter sports so popular in Jackson Hole at top of mind, the Teton House has novel features like a cutout portion of the rear exterior that creates a covered hallway of sorts ideal for skiers to come and go. Nearby is a corridor with plentiful shelving, drawers and pegs well suited to storing snowboards, boots and gloves.

The rustic design continues seamlessly inside with wood running across the walls and ceilings of the kitchen (including the fridge!), bedrooms and living room. The airy space is so roomy that it even has an in-house movie theater.

But if the eventual owner is ever feeling cramped, say with extra guests during the holidays, they’ll have a chance for reprieve. The property includes a detached wooden guest house modeled on the main residence that’s equally opulent, but, you know, a bit smaller.

See more images of the innovative house below: