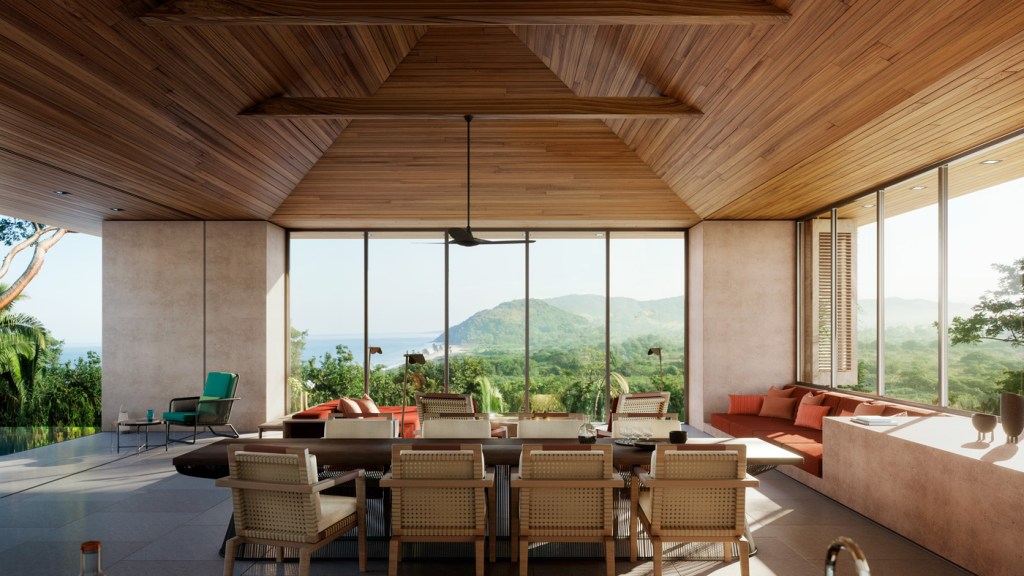 When Mexican real estate developer and president of RSC, Ricardo Santa Cruz, and the RLH Properties team found the Mandarina coastline property in 2008, they couldn’t believe the treasure they had stumbled upon. The uninterrupted 636-acre parcel of immaculate Nayarit coastline, jungle, and estuary was within driving distance of Puerto Vallarta but completely removed from the busyness of modern society.

Thus began a 2.5-year saga of acquiring the veritable jigsaw puzzle of farmer-owned land. RLH Properties negotiated sales with each of the 58 families, promising to create a vision that would benefit the local community while bringing in sustainable tourism to an area overshadowed by established resorts to the south.

“We are not speculators,” Santa Cruz says. “We’re there to stay and create a world-class resort destination. [These families] would receive and participate in the benefits from the development.”

RLH Properties devised a “branded residence” and hotel hybrid layout. The caveat was that this escape, which would be of the highest quality, had to incorporate the natural environment into the development. The team signed operational agreements with One&Only (marking the brand’s first foray into private residences) and Rosewood to provide trademark experiences.

In total, the One&Only side of the grounds will have 55 private homesites ranging from $4 million to $12 million; there will also be 108 suites. The property will have a year’s head start on Rosewood, opening in mid-2019. Rick Joy Architects (of Amangiri fame) took the landscape into account and used the natural features of the land as the foundation for each property. As a result, no two homes are exactly the same.

Although the sum equals a medium-sized resort, each suite and homesite is spread out with an average density of one building per 2.4 acres. Residences are nestled among old-growth trees or set atop steep hillsides. Owners can choose between land with a shaded canopy, expansive views of the Pacific Ocean, or both.

It’s an intoxicating experience that begins detoxifying the soul mere minutes after arrival.

The vision is slowly coming to life through individual locales that blend seamlessly into whichever of the three microclimates they happen to be situated in. Six of the first 18 sites have been sold, including Lot 14—the highest buildable hilltop on the property. The site offers dramatic 360-degree views of all three microclimates plus the Sierra Vallejo Mountains towering behind the resort.

Mandarina will also include all the top-tier amenities that One&Only is known for. Unique to this property, a 22,000-square-foot spa and wellness center will harmonize between four large Higuera Blanca trees, which anchor an enclave fittingly located near the center of that side of the development. It will have an authentic temazcal (ancient Mayan healing) practice plus several treatment rooms built around the trees. It’s just one example of the strict preservation philosophy that’s built into Mandarina’s DNA.

“We definitely wanted to create as little impact as possible,” Santa Cruz says. “In Mandarina, we made the decision that the natural vegetation already there was so precious and irreplaceable, you’re actually buying time. That becomes the property’s biggest asset.”

They’re also doing their part to protect the ancient heritage of the site. A full-time archaeological team is digging through centuries of dirt on the grounds to preserve artifacts of the Cora and Huichol tribes, which still call this part of Nayarit home. Rocks with 500-year-old markings are fenced off around the property during construction and will be incorporated into the final layout.

View from the living room  Photo Credit: Courtesy of Mandarina and Hayes Davidson

The team is looking to the future, too. Mandarina’s labor force is predominantly local, and the accompanying investment is helping neighboring communities stake their claim against Punta de Mita, Sayulita, and Puerto Vallarta to the south. RLH Properties gave the tiny neighboring community of El Montéon a classic beach club with basic amenities and a water tower securing potable drinking water—two things the 2,500-person town never had before. Tourists are beginning to discover El Montéon, and a real estate boom is underway.

As much as Mandarina is going to redefine the standard for luxury in Mexico, it’s going to do so in an understated way that matches its future residents and guests.

Perhaps this is best understood when viewing the expanse from the water. Beyond some of the gathering spaces hugging those sharp Pacific cliffs, the residences and suites will blend into the jungle by design, remaining virtually unnoticeable.

For the discerning individual, the residential community will offer the ultimate luxury—the rare chance to disengage completely from modern chaos and reconnect with nature.

View from the dining room  Photo Credit: Courtesy of Mandarina and Hayes Davidson