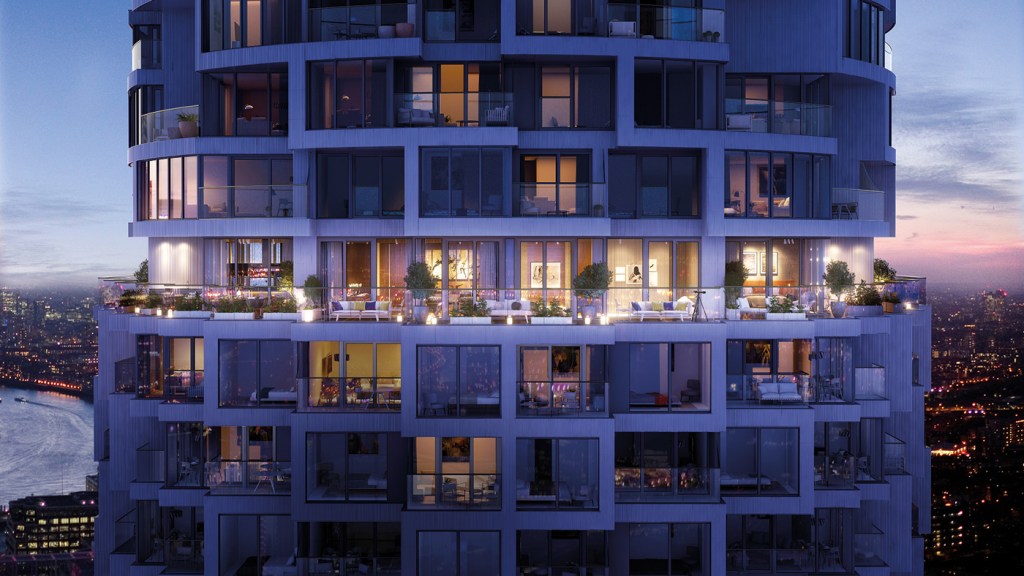 When One Park Drive opened in March 2017 in London’s Canary Wharf, it was lauded as a pioneer in the city’s next generation of large-scale community living.

As world-renowned Swiss firm Herzog & de Meuron’s first residential building in the U.K., it also made a strong statement as a standalone architectural marvel. Rather than the traditional flush look, apartments are stacked unconventionally across the 58-story cylindrical building. The end result is a structure made up of unique zones that offer separate, distinctive living experiences.

The newest collection consists of three Sky Lofts that will exist on the 32nd floor between One Park Drive’s Cluster apartments (in the mid-section of the building) and Bay residences (larger units toward the top of the building). As the link between the two, the Sky Lofts will each feature tall ceilings, capacious rooms, and up to 1,300 square feet of outdoor terrace space. (The terraces can be accessed from all of the major rooms in the units.) Additionally, the sky abodes include separate kitchen and lounge areas plus five-piece bathroom suites.

These three residences will incorporate the modern, fluid style that is present throughout the rest of the building. Large, angular windows offer stunning views of the Wharf and surrounding communities while allowing the crisp spring air to flow seamlessly through the living spaces.

Residents will be able to enjoy all of the amenities that the building has to offer, including a screening room, a library, and a health and fitness suite with a 65-foot swimming pool overlooking the docks.

One Park Drive is the anchor of new development happening in and around Canary Wharf. Construction plans for the district include up to 3,600 new homes, 380,000 square feet of retail space, 2.8 million square feet of office space, and eight acres of public spaces, squares, and parks. Buyers can become part of that community by purchasing one of the residences, with prices starting at around $3.86 million.