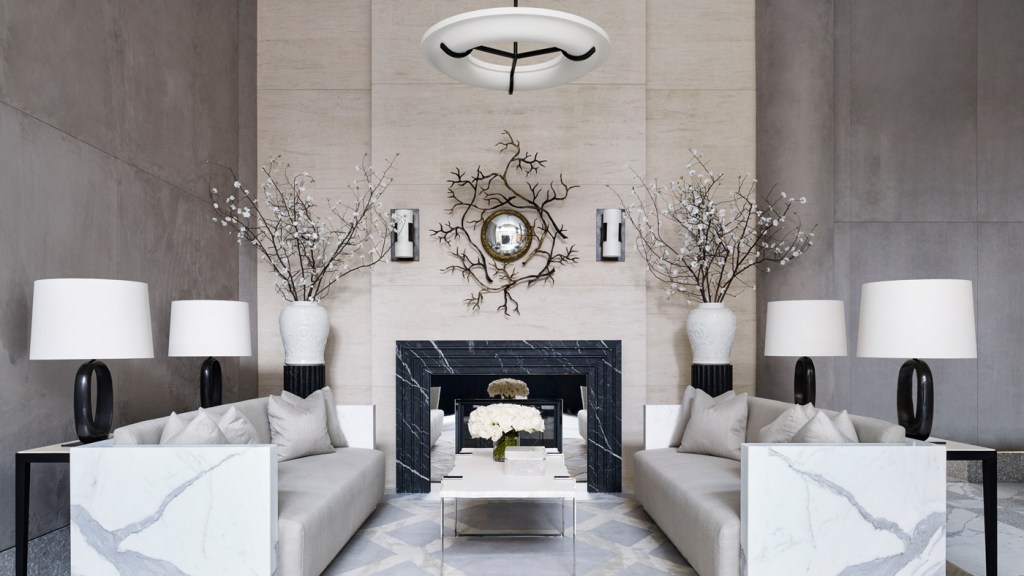 Developer Broad Street Development has tapped designer Ryan Korban (an Architectural Digest Top 100 Designer) to create the interiors for 40 Bleecker Street, a 61-unit condominium project underway in New York City’s trendy NoHo neighborhood. Korban, who routinely mixes old-world romance with urban cool, has previously worked with a steady roster of celebrity clients including Kanye West, Alexander Wang, and James Franco. Newly unveiled renderings demonstrate that his new project will be just as glamorous of an affair as his designs for celebrities have been.

The first interior photo reveals the posh lobby, which will include two custom-made marble couches, a slab coffee table made of rough-hewn French limestone, a black marble and mirrored fireplace, suede walls, and terrazzo book-matched floors. A neutral color scheme (think muted grays, creams, and and beiges) allow playful touches like a mirror surrounded by branches to truly pop, while black-and-white lamps add an elegant touch to the sophisticated space.

Though additional interior imagery of the project has not yet been released, units and additional common spaces will likely follow a similar design aesthetic. Architecture by Rawlings Architects and landscaping by Edmund Hollander (the team that worked on 215 Sullivan in Greenwich Village) will be front and center in the building, pairing perfectly with the posh decor.

The 61-unit building includes one- to three-bedroom units and a collection of large penthouses that will crown the top floors. Onsite amenities will include a swimming pool, gym, and lush courtyard that offers a touch of nature in the midst of the city. Limited parking will also be available in the building—a rarity for NoHo.

Pricing for the units will begin at just under $2 million. Sales are expected to launch in early 2018 and will be handled by Fredrik Eklund and John Gomes of Douglas Elliman.