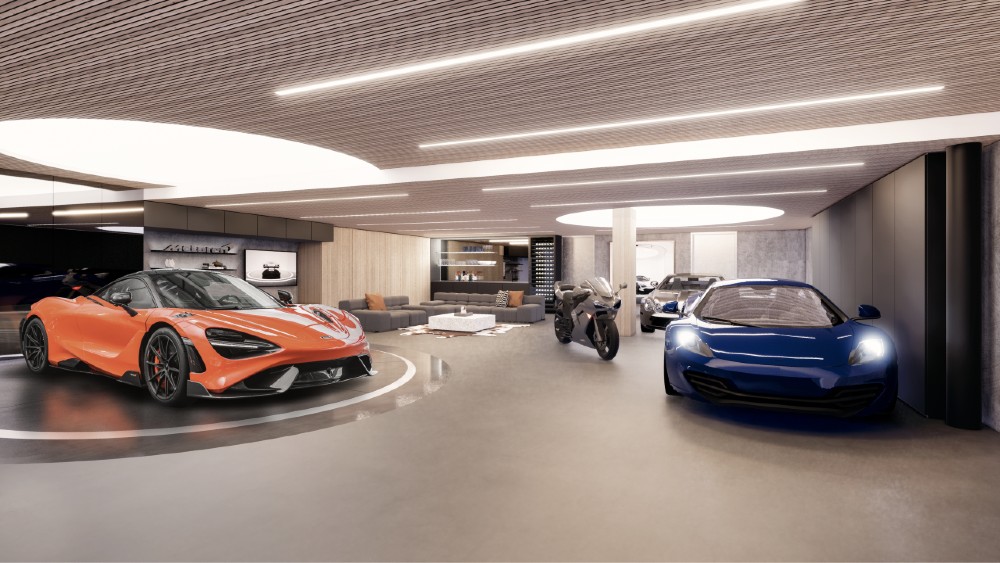 Angelenos love their cars. McLaren is now playing to that affinity by offering one homebuyer the chance to own a custom “super garage.” Purchase it with the Terrace Estate penthouse at the new Pendry Residences West Hollywood for $16 million, and your own private elevator will bring you directly from your garage to your new abode.

And, perhaps even better than the space to hold five of your best cars, the garage comes with the exclusive opportunity for a one-year lease of the new McLaren 765LT, which is one of those nearly ungettable gets, as the car has sold out in North America and only 765 of them have been made.

Called the Showroom, the 1,700-square-foot garage will be both private and gated, and located beneath the residential building. There will also be a private washroom, and the space comes with a design allowance to customize the car gallery in collaboration with EYRC Architects.

McLaren is throwing in one other set of wheels for the supercar drivers-in-training: a new ride-on, electric-powered McLaren Senna for the kids.

The garage can be purchased with any residence in the building along the Sunset Strip, not just the two-story penthouse #608. The penthouse is one of 40 new residences, from 2,900 to 6,000 square feet, that were built beside the new Pendry West Hollywood hotel. The Terrace Estate units have massive outdoor decks of up to 3,400 square feet and that include private pools and spas. The residences each have three bedrooms and 3.25 baths, gourmet chefs kitchens, walk-in closets by Poliform, floor-to-ceiling glass windows that give beautiful views of Los Angeles and premium finishes throughout. Each also has direct private-elevator access to the unit. Martin Brudnizki Design Studio created the interiors, while award-winning Ehrlich Yanai Rhee Chaney Architects designed the outdoor landscaping.

The residents will be able to take advantage of amenities, including the private club and restaurants, as well as catering and concierge services, that are part of the adjacent Pendry hotel.