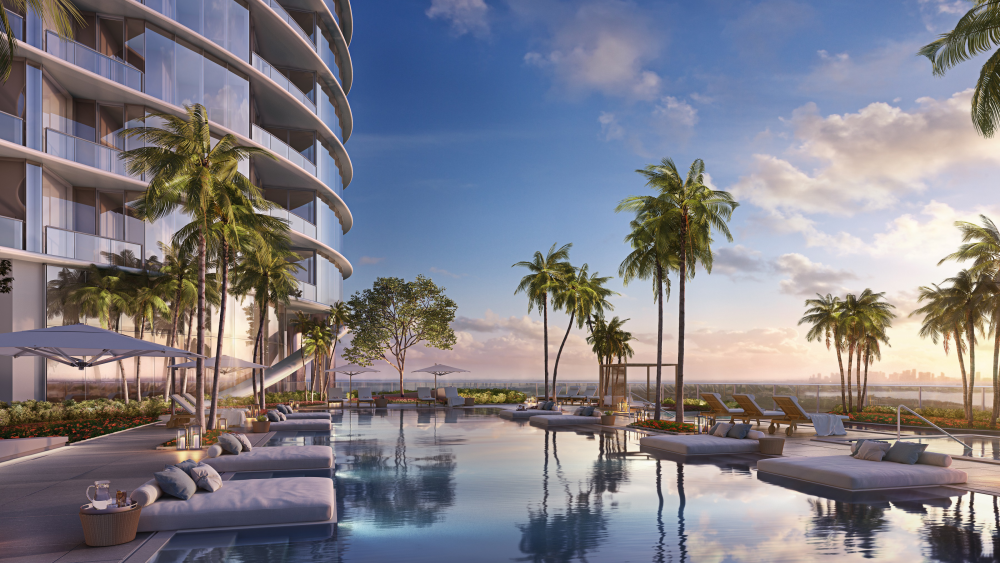 The caché of living in a hotel was once all the rage—Tennessee Williams wrote plays during his Hotel Elysèe residency in New York, and Oscar Wilde spent his twilight years in Paris’ Hotel D’Alsace (now L’Hotel). But after a long residences boom in the ’90s, the paradigm is shifting. Rather than attaching homes to a specific hotel or resort, hospitality groups are opening branded residences completely separate from the front desk check-in.

But what does an apartment with Mandarin Oriental or Ritz-Carlton branding look like, anyway? The perks were clear enough before: Living in a hotel entails a gorgeous, often exotic location, a like-minded community and exclusive access to on-site spas and restaurants.

With a standalone residence, it’s much of the same. The chief distinction is a heightened sense of exclusivity, as there’s no adjoining hotel with which to share space. Instead, the brand—be it Four Seasons or otherwise—acts as a sort of property manager, attending to each residence and offering the same amenities and concierge services one would find in a five-star hotel.

But, naturally, it depends on the property. Here are five soon-to-come openings on the cutting edge.

Photo: Courtesy of DBox for Finchatton

As The Four Seasons’ first ever standalone residential building, Twenty Grosvenor Square has a lot to live up to. But the property, which was unveiled just a month ago, looks to deliver by virtue of its design and location alone. Set in the heart of London’s Mayfair neighborhood, the 37 residences’ interiors were designed by Finchatton with soaring ceilings, classical dining rooms and other touches that celebrate the area’s history as a favorite haunt of royalty—as well as a muse to the likes of Austen, Dickens and Wilde.

Hotel-esque qualities include the assurance that each home will be cared for “to the highest standards of quality by Four Seasons,” as per the company press release. Amenities include a steam room and sauna, wine cellar, cinema and garden library. The 250,000-square-foot development will offer three-, four- and five-bedroom residences, with prices starting at $21.5 million.

Unlike the Four Seasons, the Ritz-Carlton already has a few free-standing residences in operation, most notably in Asia, with sought-after condos in both Singapore and Bangkok. Sunny Isles Beach stakes the brand’s claim to Florida’s real estate scene—its private Miami Beach residences opening later this year. Sunny Isles’ curvaceous tower—designed by  renowned firm Arquitectonica—has the feel of the tiered decks of a superyacht, complete with 2.2 acres of private landscaped and oceanfront property. The 212 condos start at $2.6 million; penthouse units will fetch up to $32 million.

Like Ritz-Carlton’s hotel properties, a Club Level offers a lounge, private dining area, and indoor and outdoor bar areas for residents. There’s also a private spa, guest suites and, of course, a 24/7 concierge. On-site restaurants will cater to individual units, and the building provides regular programming and attractions for children as a family-friendly residence.

Four Seasons’ Marrakech residences firmly entrenched themselves in one of the Red City’s most mod new neighborhoods—M Avenue. The district touts itself as Morocco’s next big fashion and design destination, complete with hotels, residences and even schools to support all aspects of a well-heeled neighborhood. The Four Seasons homes, which will debut in 2020, offer two-, three- and four-bedroom residences, with penthouses listed just shy of two million. Perks include full concierge services, two separate pools, a kids’ club and business center.

After the success of its standalone project at One Hyde Park in London, Mandarin Oriental brought the model stateside. The brand announced just last February plans to open 69 residences at New York’s 685 Fifth Ave, with a projected completion date tentatively set for sometime in 2021. Since the announcement is so fresh, much remains hush-hush, but what we can say for sure is that the Mandarin Oriental will offer a library and lounge on the top floor, in addition to a fully-equipped gym and spa—plus rooftop pool. CityRealty’s Midtown East survey puts the starting price somewhere in the $2.5 million range, despite official numbers remaining unannounced.

Architect Glenn Rescalvo imagined the Four Season Private Residences at 706 Mission Street in San Francisco as a modern take on the historic, circa-1903 building in which it’s housed. Blending art deco elements on the exterior with sleek interior design, the building stands out in the city’s skyline for all the right reasons. Located in the heart of the Yerba Buena District, the Four Seasons hopes to put the finishing touches on 706 Mission Street in 2020. Its amenities will include dedicated space on the fifth level for a fitness center, lounge, bar, private dining and tasting rooms and an outdoor terrace. A spa, in-resident dining, concierge and housekeeping provide the five-star hotel touches. Condo pricing starts at $2.5 million, however, penthouses will run between $15 and $25 million.