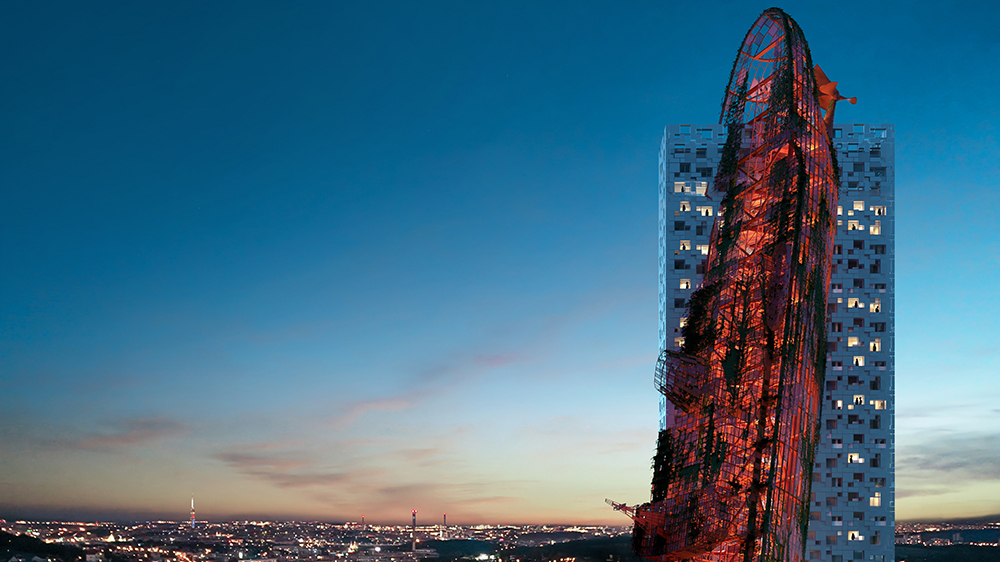 A proposal for a striking new building in the heart of Prague is causing a fuss in the Czech capital. Why? Because the building, which would be the city’s tallest if approved, looks like a sunken ship.

Dubbed Top Tower, the eye-catching structure is expected to stand at a tall-for-Prague 135 meters (443 feet) tall, reports CNN. The city’s historic downtown is listed as a UNESCO World Heritage Site—and because of that high-rise buildings are reportedly banned near the city center.

Designed by sculptor David Černý and architect Tomáš Císař, Top Tower combines a standard looking building with what looks like the skeleton of a ravaged oil tanker as it heads straight down to the ocean floor. The ship’s deteriorating hull will be covered in greenery, making the building look even more like something out of a post-apocalyptic science fiction film. That effect is purposeful, as the building’s design is supposed to make onlookers think about environmental issues.

Top Tower is meant to function as a residential building, with the lower levels used for offices and a cultural center. There will also reportedly be a publicly accessible rooftop garden with panoramic views of the city that can be reached via exterior elevators.

“We have been preparing the Top Tower project for more than two years and the final version was preceded by eight other alternative proposals,” said Marcel Soural, chairman of the building’s developer Trigema.”During this time, we have collected and are still collecting input from experts, affected national and local authorities, and of course the local public, whose representatives have already been and will continue to participate in a number of participatory negotiations.”

The proposed building is to be located near the Nové Butovice metro stop in the Prague suburbs. If approved, construction on Top Tower is would start in 2021, and is expected to take up to three years. The building is expected to cost 2 billion Czech Crowns (or $84.5 million at current exchange).