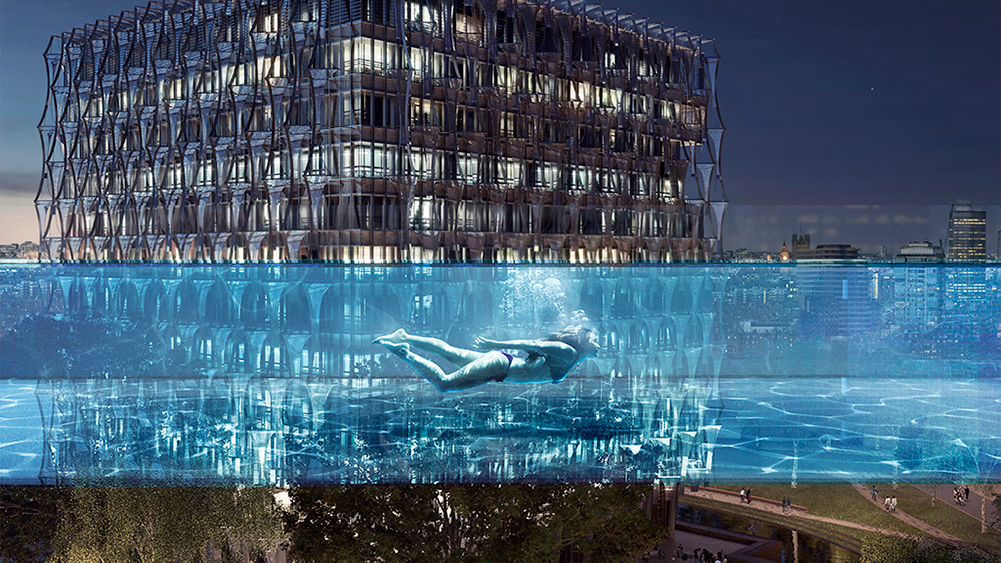 Lots of luxury residential buildings have pools. In order to differentiate themselves in this increasingly crowded aquatic landscape, some developers are getting creative. The latest entry in that out-of-the-box thinking is in London, where the apartments at Embassy Gardens today unveiled the world’s largest floating acrylic pool.

The structure is rather aptly dubbed Sky Pool, as it’s suspended about 115 feet in the air. It connects the two Embassy Gardens towers at their roofs, and is about 82 feet long—46 of those feet are suspended in mid-air, although residents who are a bit afraid of heights can paddle in the water at either the end of the structure, where the structure is docked on the rooftops and more closely resembles two ordinary outdoor swimming pools.

Naturally, it took quite a bit of planning to suspend so much water in mid-air. The project represents a collaboration between architecture firm Arup, engineers Eckersley O’Callaghan and acrylic fabricator Reynolds Polymer Technologies. Arup’s lengthy resume includes work on Singapore’s jaw-dropping Jewel Changi Airport and Denmark’s spiraling Camp Adventure tower; Eckersley has worked on everything from a Mars concept home for astronauts to a revamp of the TWA Flight Center in New York.

The high-flying Embassy Gardens structure was first built at Reynolds’ facility in Colorado before it was eventually shipped to London. To prevent the 10-foot pool from cracking under the immense weight of all the water (plus people), it was made with a bottom that’s nearly 12 inches thick. For those who are still a bit squeamish about swimming so high up, rest assured that the project has also been tested by its manufacturers many, many times for safety.

The pool won’t obstruct the sky for passerby, meanwhile, residents paddling through it will enjoy views of the nearby Thames and beyond.  EcoWorld Ballymore

Of course, you’ll need a membership to take a dip. All residents are automatically enrolled in Embassy Gardens’ Eg:Le Club, which grants access not just to the futuristic water feature, but a slew of other amenities as well, including a gym, movie theater, lounge and a more by-the-book indoor pool. For those interested in buying in, prices start at about $1.4 million at current exchange.