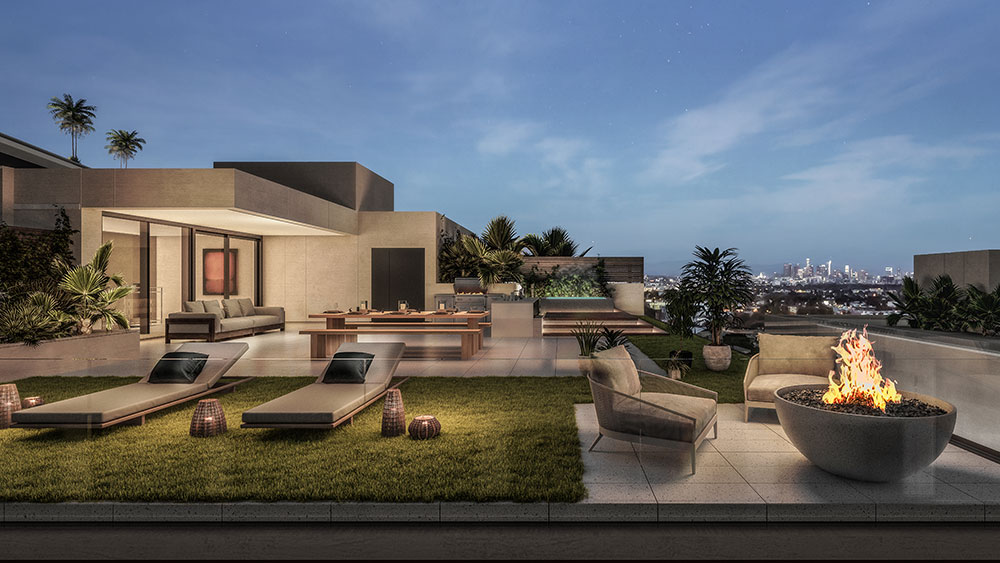 The Sunset Strip in Los Angeles is as famous as Hollywood itself. But it’s had a rough few decades. Once the definitive purview of movie star glamour and then rock star shenanigans, it gradually grew seedy with strip clubs and shady shops. But if ever there was a land of reinvention, it’s LA. The Sunset Strip is now on its fourth act: being remade for luxury living in the 21st century.

This includes stunning makeovers of legendary spots like the Sunset Tower and shiny new hotels taking over tired corners. The Montage resort and residence brand has stamped its name on the neighborhood and is about to lift the curtain in 2021 on its new West Hollywood location, Pendry Hotel and Residences West Hollywood.

The hotel’s entrance and café-style dining are curbside to all that’s happening on Sunset Blvd., and Pendry’s modern, hip version of luxury will pervade the rooms and public spaces, which include an intimate—and comfortable—music venue as well as a suite of restaurant options run by Wolfgang Puck, with its crown jewel being a rooftop, poolside hot spot.

But if that’s the hotel’s crown jewel, the entire property’s gem will be the 40 residences built behind the hotel, on the slope between Sunset Blvd. and Fountain Avenue. Locals know just how spectacular a piece of real estate this is; the views of Los Angeles stretch to the ocean, with many landmarks lighting up the night skyline.

A rendering of the interior of Terrace Estate #803, which should be completed in early 2021.  Credit: Pendry Residences West Hollywood and Ehrlich Yanai Rhee Chaney Architects

Capitalizing on that, renowned architecture firm Ehrlich Yanai Rhee Chaney (EYRC) Architects built the residences as a tiered structure, so there are several penthouse condos with private terraces stepping down the hill, each with expansive outdoor space and none obstructing the others’ views.

“Sometimes in architecture, a project’s biggest challenge also unlocks its potential, and that was the case with the Pendry,” says Steven Ehrlich. “The steep, sloping site drops 40 feet in elevation from Sunset Blvd. down to Fountain Ave. We saw this as an opportunity to bury the parking and design the condos to step and flow down the hillside. That allowed for magnificent views via roof terraces, and each unit has a private elevator. The condos have views on both ends, with natural breezes flowing through.”

The building is also LEED Silver certified and features incredible landscape design on the private outdoor spaces by LifeScapes—in partnership with EYRC Architects—on each of the five Terrace Estates, including fire pits, pools and outdoor kitchens.

One of the first units up for sale is number 803, a duplex that has more than one outdoor space and a hot tub on the upstairs patio. At 2,900 square feet, its exterior is actually greater than its 2,800-square-foot interior, an unusual feature for a city condo.

The $13 million, three-bedroom and four-bath home makes the most of its views with floor-to-ceiling glass windows that are double-glazed and low-UV rated. A private elevator whisks you up from the grand residential lobby, and there’s a second private service elevator for when packages are being delivered or you’ve placed an order with one of Puck’s restaurants next door.

Interior design was completed by Martin Brudnizki, with a stunning kitchen in white-oak cabinetry, matching the wide-plank wood floors, and a large Calacatta Borghini marble island. Top-of-the-line appliances include a Sub-Zero dual-zone wine refrigerator in number 803. The home is pre-wired for smart-home functions.

The primary bedroom features a Poliform walk-in closet and a giant bathroom that feels like a spa with its natural stone walls, flooring and vanity. The soaking tub may be just the thing to draw you back inside off your terraces.

Within the residence building, owners will have access to a fitness center, lounge, boardroom, wine lockers and tasting room, 24-hour concierge services and security, pet grooming, walking and sitting services, valet parking and electric-car charging. All residences also come with two parking spaces in the gated, subterranean garage (where there’s also more owner storage lockers). But if you want a truly next-level space for your car collection, Pendry has partnered with McLaren to create a custom “super garage.”

Residents also have access to the hotel’s amenities, from the dining to the spa, as well as a screening room, the fitness and yoga studios and the Britely social club (a one-year membership is included), which provides entrance to a private rooftop lounge, the music venue and a bowling alley.

The listing is held by Montage Residences Real Estate.