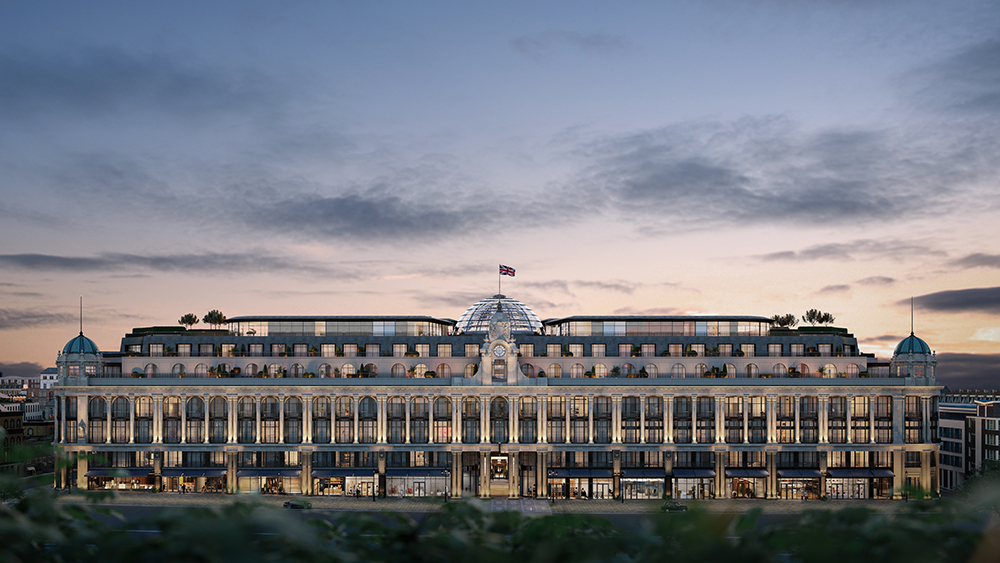 Photo: Courtesy of The Whiteley

Whiteleys, a London department store that was once on par with Harrods, Selfridge’s and Liberty, first opened its doors about a century ago. It eventually shuttered in 1981, but it’s not about to be scrapped and replaced with a newer, glossier structure. Instead, the building (which, until recently, housed a mid-level shopping mall) is now being transformed into a home for 139 luxury residences, plus the UK’s first Six Senses hotel. These residential units launch sales today, with prices starting at about $2 million.

The project is being developed by MARK and C C Land in collaboration with Finchatton, the latter of whom also worked on the Four Seasons Private Residences at Twenty Grosvenor Square. The renowned Foster + Partners designed the new Whiteley London, meticulously restoring its façade so that some of the building’s history remains.

One of the living rooms  Photo: Courtesy of The Whiteley

Homes will range in size from one to five bedrooms, with penthouse offerings also available. In addition to the condos, there will also be 14 Six Senses–branded residences in the building. If you’d rather just check in to the hotel for a night, there will be 110 rooms available for reservation as well.

The kitchen  Photo: Courtesy of The Whiteley

One of the biggest resident perks has to do with Six Senses, too: The building will be the site of the first Six Senses Place, a social club that includes a restaurant, co-working spaces, wellness rooms, private dining areas and more. All residents will receive automatic membership to the exclusive space and can enjoy all that it has to offer year-round. Condo owners will also have access to a fitness center, pool, tennis court, concierge and more.

One of the bedrooms  Photo: Courtesy of The Whiteley

Location is another top consideration here for those looking to buy into the historic space—it’s situated in Bayswater, so it’s within walking distance of Kensington Gardens. True to its department-store history, multiple shops and restaurants will also occupy the space, so residents may not have to wander far to find whatever it is they need.

The primary bathroom  Photo: Courtesy of The Whiteley

There’s just one catch: Whiteleys London still has a ways off before it reopens its doors. The development is currently scheduled to be completed in 2023. It comes on the heels of the similar residential conversion of Gasholders, a complex housed in old cast-iron gasholder frames in King’s Cross. Not exactly as glamorous an origin story as Whiteleys, but both have managed to stand the test of time regardless.

Check out more photos of the new Whiteleys London below:

The pool  Photo: Courtesy of The Whiteley

The department store’s original rotunda will be completely restored.  Photo: Courtesy of The Whiteley

The interior courtyard  Photo: Courtesy of The Whiteley