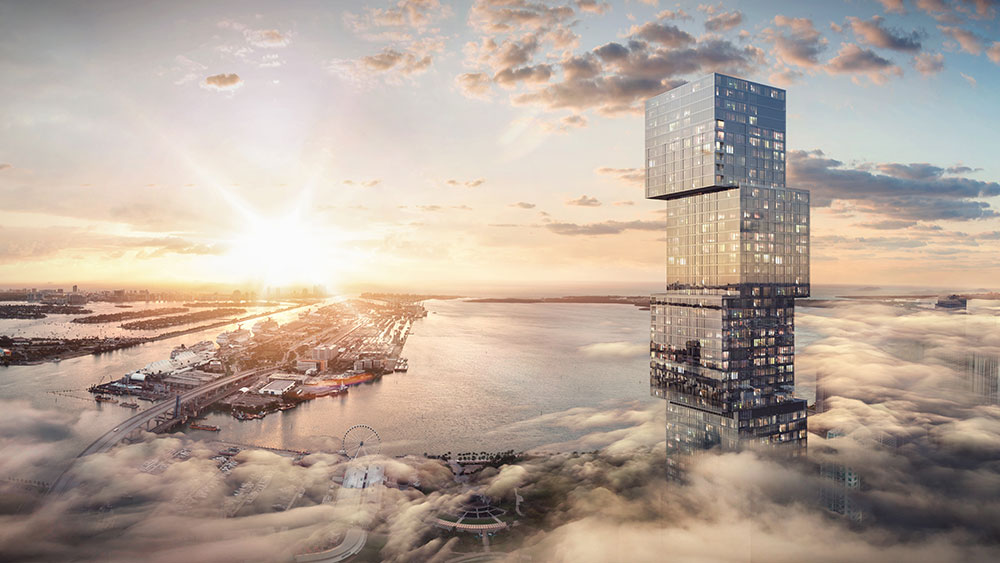 In Miami’s luxury condo market, demand is outpacing supply. The city remains an appealing locale for celebrities, athletes and entrepreneurs—David Beckham’s big penthouse splurge last year is a prime example. According to the Miami Association of Realtors, the city’s single-family luxury transactions jumped 114 percent year-over-year in January of 2021. Developers are jumping on this sales boom, most recently the Waldorf Astoria in Miami, which launches its residence sales today.

The building will be a whopping 1,049 feet tall, making it the tallest residential tower south of Manhattan. It’s an equally ambitious design, too, featuring a series of offset glass cubes stacked on top of one another. This look was dreamed up by designer Carlos Ott, best known for building the Opera Bastille in Paris, and will be executed by Sieger Suarez, who has worked on other branded residence towers for companies like Armani/Casa and Porsche. The brief was simple: “How do we make something that looks like it’s very difficult—close to impossible—while actually being able to build it, and it not costing a fortune?” says Ryan Shear, managing partner at Property Markets Group, the building’s developer, along with Greybrook Realty Partners. “It was a challenge to make something that looks structurally challenging; that has an interesting façade.” That ambition pays off. Since it’s so tall, the building’s residents will enjoy unobstructed views of the nearby water.

The developer tapped California-based firm BAMO to do the interiors of the building. Amenities will include specialty restaurant Peacock Alley, a resort-style pool deck with private cabanas, meeting and boardroom spaces and a spa and fitness center. The condos themselves will feature smart-home technology, so residents can navigate various concierge services through an app. Dining reservations, valet services and dog walking can be executed with just a few taps.

A closer look at one of the residences, which start at $1 million.  Rendering: ArX Solutions

Prices for residences start at $1 million, and there will be 360 units up for grabs. Sales and marketing is being led by both the developer and Douglas Elliman’s Eklund | Gomes Team.

Check out more photos of the individual residences, below:

One of the bedrooms.  Rendering: ArX Solutions