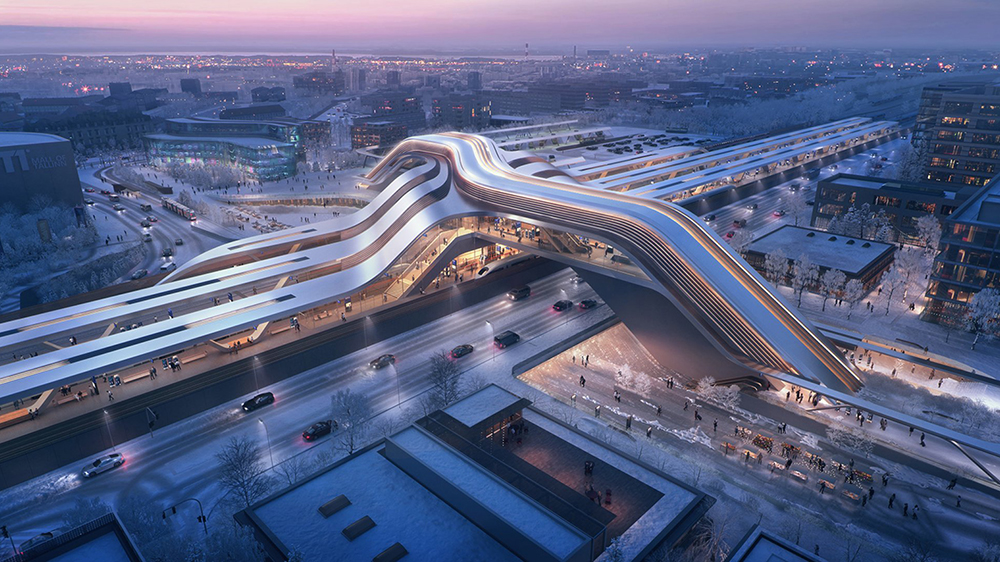 Zaha Hadid Architects has won an international competition to design a new railway station in Estonia, and if the renderings are to be believed, design lovers are in for a treat.

The Ülemiste terminal is set to be built in the Estonian capital of Tallinn and will be a focal point of Rail Baltica, a planned electrified railway system that will connect the country to Poland, Lithuania and Latvia by 2026. The station would be the starting point of a line connecting Tallin, Riga and Vilinius with the rest of the high-speed rail network. It will also double as a public bridge.

Renderings of the station, which was designed in collaboration with local firm Esplan, show a large futuristic complex that looks like the 3-D reproduction of a computer motherboard. The building is designed to function as a multi-modal transport hub for local, national and international travelers, linking bus, tram and rail lines, as well as the adjacent Tallinn airport.

The station’s spatial geometry is meant to make navigation easier and smooth the integration of the different transportation lines, with each coming together at its terminus. ZHA also tried to keep local pedestrians in mind when designing the structure. So, it also acts as a public bridge for the local community as they walk the surrounding area.

While no timeline for the station’s construction was given, the London-based firm said that it will incorporate a modular structural system so that it can be built in phases. This will allow the station to be used throughout the building process and also reduce disruptions to the area. It also was designed to meet BREEAM sustainability benchmarks and guidelines.

This, of course, isn’t the first train station ZHA has designed, and it’s unlikely to be the last. Two other recently announced projects, the Napoli Afragola station in Italy and the Fornebubanen Metro Line stations in Norway, are set to begin construction next year.