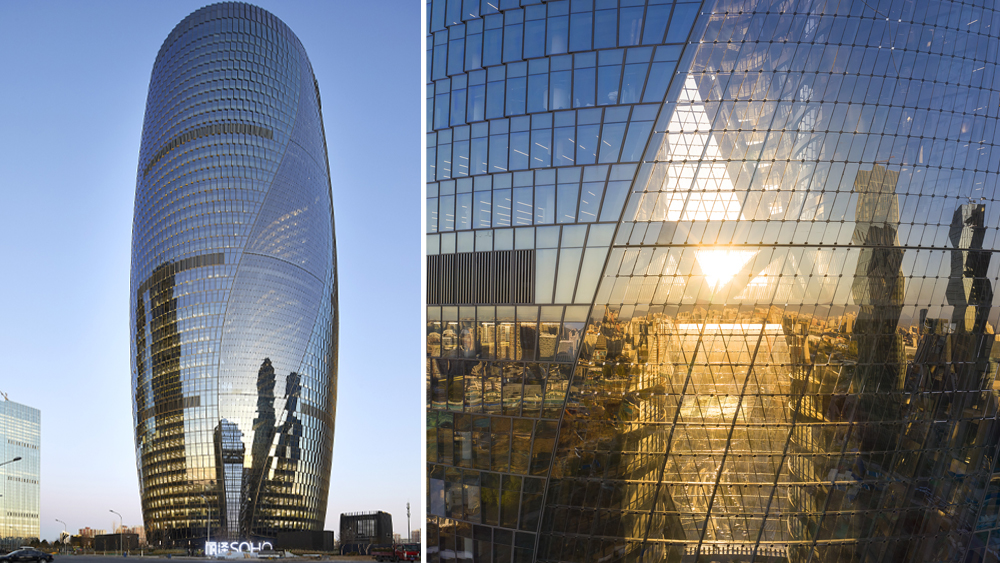 Renowned for its boldness, Zaha Hadid Architects is never afraid to take a risk or two with its designs. And its latest tower, the Leeza SOHO tower in Beijing, is no exception. Soaring into the sky at the heart of the Chinese capital’s Fengtai business district, the new office building is now home to the world’s tallest atrium.

Having opened in Beijing earlier this week, Leeza SOHO stands at 45 stories tall. And while the building may not be that tall by modern standards, its atrium, which rises to the top of the building, is easily the world’s tallest at 636 feet, nearly 50 feet taller than the previous record holder in the Burj Al Arab hotel in Dubai.

The Leeza SOHO consists of two distinct twisting towers encased by a glass façade shell from top to bottom. The rotating atrium intertwines between the two structures, creating what the architecture firm refers to as a “dynamic pas de deux.”  It is also intersected by four skybridges that link the two halves together.

“The emerging space between these two halves extends the full height of the tower, creating the world’s tallest atrium at 636 feet, which rotates through the building as the tower rises to realign the upper floors with Lize Road to the north,” the studio states on its website.

Thanks to the its glass façade and full-height atrium, the Leeza SOHO will bring in large amounts of natural light, even deep into the structure. Its skybridges will also offer gorgeous panoramic views of the city.

Inside the Leeza SOHO tower  Hufton+Crow

The building, which was designed by Hadid before her death in 2016, is meant to be a focal point for Beijing’s burgeoning business district. Its atrium act will act as a public square and is directly linked to the city’s transport network, including the local subway and rail station.

Designed to achieve LEED Gold certification, the tower features an advanced energy management system which will monitor its efficiency in real time. The system includes high-efficiency pumps, fans, chillers, boilers, lighting and controls, along with dedicated charging spaces for electric and hybrid vehicles.