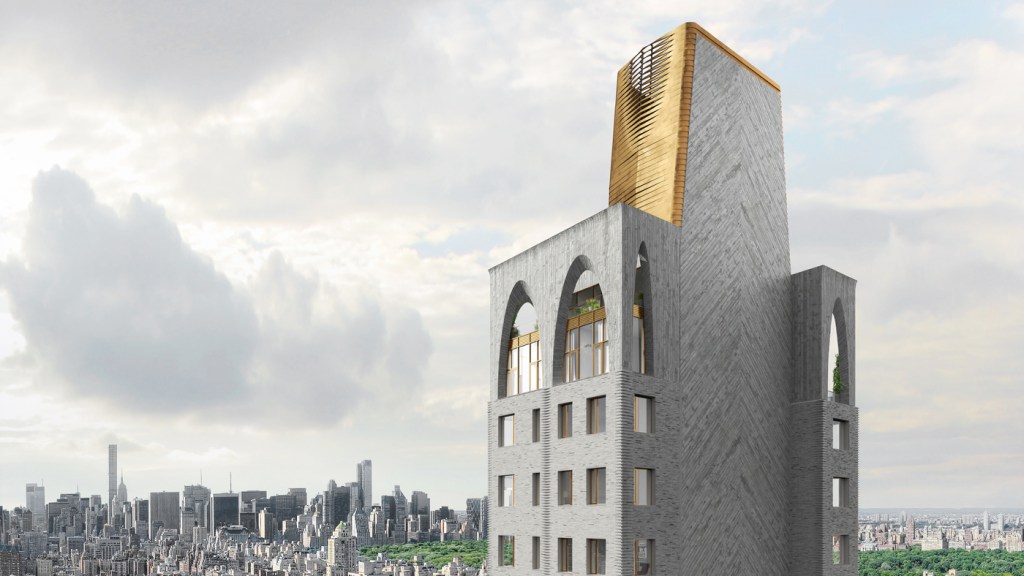 Rendering Credit: March Made for DDG

As glass and steel buildings become increasingly prevalent, cities are looking shinier and more futuristic than ever. And while many architects prefer this ultra-modern aesthetic, a handful are going back to the basics, using handmade brick and textured stone to mirror classic buildings from bygone days.

Robert A.M. Stern Architects gained inspiration from Boston’s traditional red-brick buildings when designing Lovejoy Wharf, a 157-unit condominium complex that overlooks Charles River and the Boston Harbor. To pay homage to the city’s historic heritage, the firm created a red-brick façade that disappears into a glass curtain wall as well as a three-story-high limestone-trimmed passageway that leads inside. Traditional materials such as wide-plank oak, marble, and bronze adorn the residences, which range from studios to three-bedroom units and are priced from around $650,000.

In Florida, Italian architect Antonio Citterio opted for Roman travertine (a beige limestone with pronounced layering) when designing the exterior of his first U.S. building, Arte by Antonio Citterio. The 16-unit structure, which is situated on an acre of oceanfront property in Surfside, will also feature timeless materials such as oak and brass throughout. Pricing and square footage have not yet been announced, but completion is scheduled for late next year.

Traditional materials are experiencing a renaissance even in the City That Never Sleeps, a metropolis famous for pushing the limits and embracing the future. When designing the Kent, an Upper East Side establishment with 83 two- to five-bedroom residences, architecture firm Beyer Blinder Belle created a brick and limestone façade reminiscent of classic prewar buildings. Oversized windows, steel and glass lanterns, and a decorative metal, glass, and masonry crown prove that a classic look never really goes out of style. Pricing starts at $2.7 million.

Designed and developed by Avery Hall Investments, 145 President is a 17-unit Brooklyn condominium with a handmade Danish brick façade. Each brick varies slightly in texture, color, and size, giving the building a truly one-of-a-kind look.

Sales launched last month, with units starting from around $2.3 million. Last, 180 East 88th Street, a 50-story Upper East Side tower designed and constructed by DDG, features a nearly 600,000-brick exterior handmade by Petersen Tegl in Denmark. Prices for the 48-unit building, which offers everything from lofts to five-bedroom units, start at around $3.6 million.