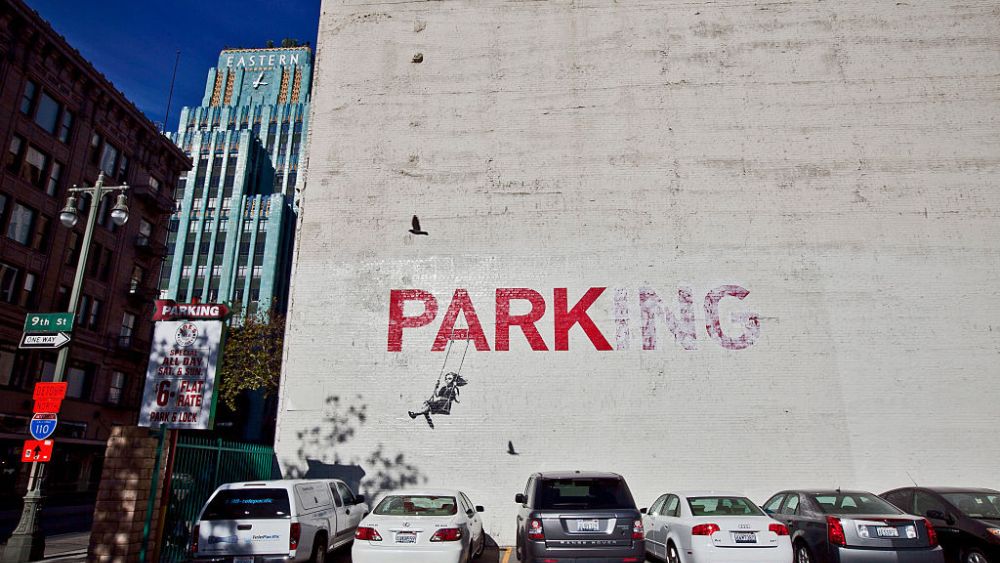 This valuable piece of street art comes with an LA landmark attached.

A historic building in downtown LA that once served as a blank canvas for Banksy is heading to auction. Located in the city’s fashion district, the seven-story mid-rise is adorned with a mural by the British graffiti artist entitled Girl on a Swing or simply, Swing Girl. Current owners of 908-910 S Broadway, Tarina Tarantino and Alfonso Campos, estimate its worth to be approximately $16 million. However, that’s not counting the added value of the art, which is expected to drive up demand and cause that figure to double.

Tarantino and Campos reportedly dished out $4 million to purchase the lot in 2007. Over the course of a decade, the two spent $1.8 million making renovations to the original building, which was built in 1914 and made several on-screen appearances during the silent-film era. The owners ultimately ended up filing for bankruptcy in April, which is why the art nouveau mid-rise is now being auctioned off. “This isn’t your typical real estate transaction,” Campos told The New York Times. “We understand the intrinsic value that the Banksy adds to the building.”

The building in Downtown LA appeared in movies during the silent-film era.  Hilco Real Estate

The artist was said to have completed the piece in 2010 while he was in town for the premiere of his documentary, Exit Through the Gift Shop. The public artwork portrays a stencil of a young girl swinging off the letter “A” in the word “parking.” Due to the public nature of the mural, it’s difficult to appraise the piece without factoring in the entire structure. And if you’re wondering whether the painting will be separated from the facade and resold, as was the case in the UK, rest assured no such antics will be taking place.

“We would never touch that because it’s not how the artist intended it to be sold. Whenever buildings have a Banksy on them, that Banksy is much more valuable on the building than it is as a piece of brick,” Sotheby’s head of Private Client Group, Holly Dunlap, told The New York Times.

“This sale presents an unprecedented opportunity to own a treasured Banksy mural, a unique piece of Hollywood history and an icon of Los Angeles culture contained within a beautifully restored Art Nouveau landmark,” Jeff Azuse, senior vice president of Hilco Real Estate, who is representing the seller, said in a press statement. Offers on 908-910 S Broadway are due in October.