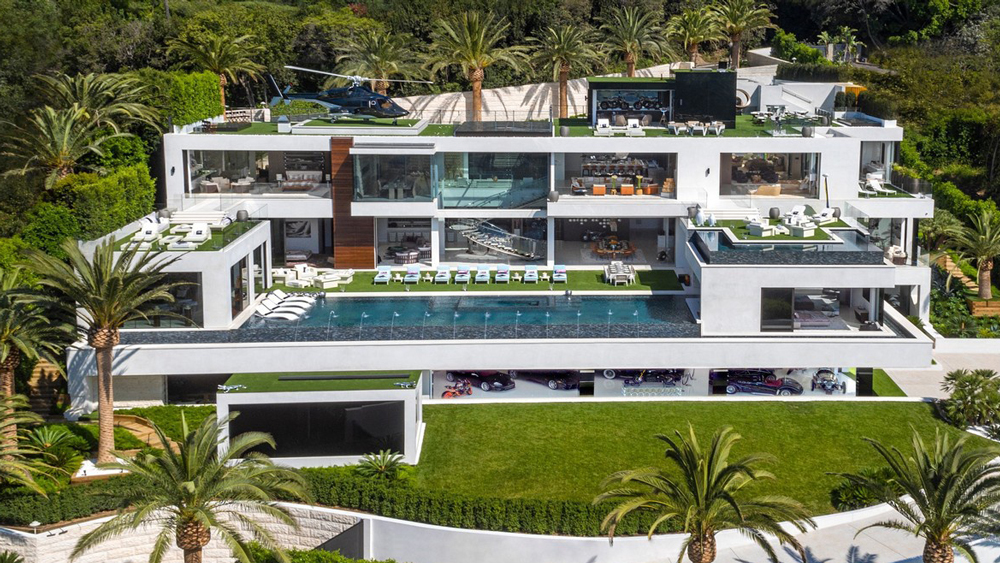 What’s in a name?

Not much, apparently, for “Billionaire,” the moniker of this Bel Air mansion, which just sold for $94 million, a 62 percent markdown from its 2017 asking price—$250 million—that made it the most expensive home in the country (at the time).

RELATED: 15 of the Most Expensive Homes in the World for Sale

The sale marks the latest entry in a bout of price cuts that has plagued the area’s mega-mansions, which many have cited as the result of a high-end housing glut. Nile Niami’s Opus remains on the market, down to $80 million from its original $100 million asking, and celeb plastic surgeon Raj Kanodia’s $180 million home, which was first listed four years ago, and looks remarkably similar to Billionaire, has also seen a price shave. Still, aspirations remain high: The newly-minted most expensive home in the country, Casa Encantada, just hit the Bel Air market for a whopping $225 million.

The upstairs office and non-operational helicopter.  Courtesy of Williams & Williams

Billionaire’s slashed price tag, meanwhile, isn’t for its lack of amenities. Not-so-modestly described as a “mind-blowing voyage of all your senses, simply the best new and innovative contemporary estate in the world!!!” by Billionaire’s website, the home is the boisterous brainchild of entrepreneur and developer Bruce Makowsky, who felt that, after years of cruising on private jets and mega yachts worth upwards of $500 million, there wasn’t any luxe real estate available to match.

To remedy this, he developed a 38,000-square-foot mansion with a 40-seat movie theater, a Louis Vuitton bowling alley, a candy room-slash-game room—complete with tall, self-serve cylinders full of the sweet stuff—and a fitness center and massage studio. Outside, find more than 17,000 square feet of entertainment decks and an 85-foot infinity pool. The home also harbors two wine cellars, an auto gallery and a rather disappointingly non-operational helicopter on the roof. (It’s from the 1980’s TV series Airwolf, apparently.)

And the sale will serve to elevate Los Angeles’ slowing luxury market—even if it didn’t quite live up to its lofty moniker.

Check out more photos of Billionaire, below:

One of two wine cellars.  Courtesy of Williams & Williams

The view from the infinity pool.  Courtesy of Williams & Williams

One of five bars in the property.  Courtesy of Williams & Williams