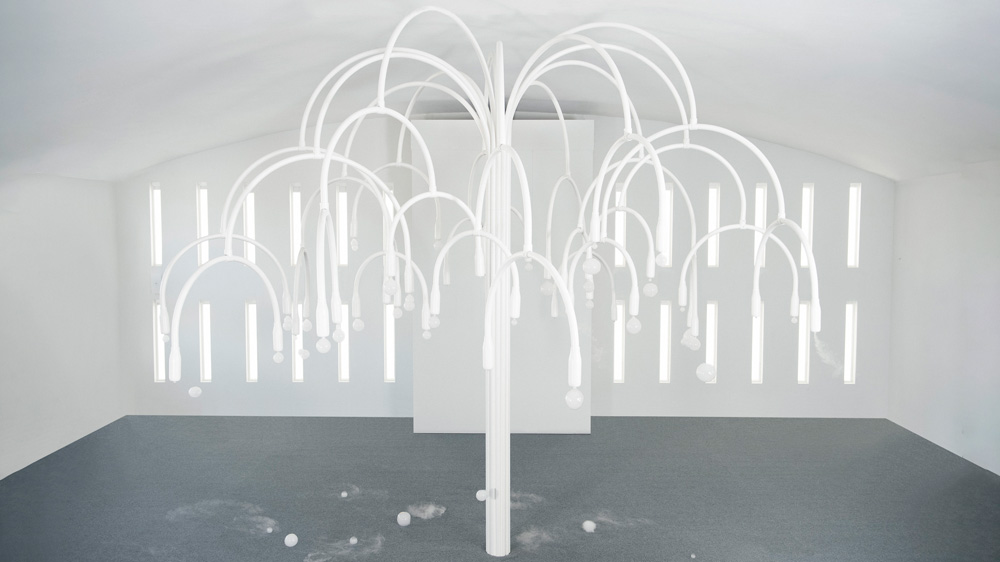 The global art and design community descended on Miami last week for the cultural melee that is Design Miami/Art Basel. Big brands were also in town, bankrolling a series of ambitious commissions that formed a constellation of satellite events across the city.

The night skies above South Beach flocked with clouds of glowing drones, courtesy of Studio Drift and BMW, while the art crowd partied the night away at the Prada Double Club, an immersive light and sound commission from the German artist Carsten Höller. Elsewhere in the city, brands ranging from Audi to Panerai and Airbnb also dabbled in creative collaborations.

One of the standout satellite projects of the fair came in the form of New Spring, an immersive installation from London-based Studio Swine, which had been commissioned by the fashion brand Cos. A tree-like structure of metal tubes, the sculpture bloomed with delicate bubbles that fell to the floor, bursting into clouds of scented smoke. Visitors could also don a pair of woolen gloves to momentarily hold the fragile orbs in their hands.

Having attracted more than 20,000 visitors when it launched at Milan’s Salone del Mobile earlier in the year, the new installation for Miami was grander in scale. Housed in the Lawrence Murray Dixon–designed Temple House, an architectural gem from the 1930s that was once the largest private residence on South Beach, New Spring felt at home under the Art Deco arches.

“We wanted to create a really powerful, immersive experience, but one that is also completely transient,” explains artist Alexander Groves, cofounder of Studio Swine alongside his architect wife, Azusa Murakami. “It’s about using the absolute minimum resources for maximum impact.”

Cos was also obviously out for maximum impact. In a world where consumers are harder to reach than ever, cultural commissions have become a vital communication channel. “There’s a lot more depth to these projects than we’ve ever seen before,” says Design Miami/Art Basel director Rodman Primack. “The smart brands know now that you’ll get far greater impact if you tread lightly. The less you try and put a cultural project through the corporate meat grinder, the better the results for everyone involved.”

Brand commissions can tend toward the gimmicky, but there is a growing sense that if handled properly, they can also provide cultural moments on par with national institutions.

“We didn’t really set a brief for this project,” explains Cos’ creative director Karin Gustafsson. “For us, it’s more about finding designers who embody our core values of timelessness, simplicity, and tactility and then just supporting them in their work.” Gustafsson has previously worked with the likes of Nendo, Snarkitecture, and Sou Fujimoto.

Rather than disappearing in the digital age, the power of communal experience is only becoming more profound. By bringing people together for a moment of pause, contemplation, and fun, branded projects such as New Spring stand out in the digital hubbub of our daily lives.

“We looked at Japan’s festival of cherry blossoms for inspiration,” says Murakami, “where a whole community gathers together under a tree and shares a special moment. This moment is appreciated all the more because it’s so fleeting and transient, lasting just a few days but during that time being seen as the epitome of beauty and perfection. Once it’s gone, all that’s left is a communal memory that lives on in the mind.”

This is a noble sentiment from the designers, but there’s a harder-nosed benefit of designing communal experiences, too: They have the potential to go viral. From Random International’s Rain Room to Jeremy Deller’s Stonehenge bouncy castle and Yayoi Kusama’s mirrored infinity spaces, there is a hunger for public works that people can be part of (and then share as selfies).

“I don’t think it’s cynical to consider the potential social media impact when commissioning a new project,” says Primack. “The digital and physical are not in conflict with one another; they are two sides of the same coin. Although I shy away from looking at a potential project and asking whether it’s Instagrammable, I do think you can partly measure a project’s success by whether it excited people enough to share it with their community.”

As national funding for the arts falters, there’s a growing opportunity for brands to take a more active role in supporting art and design. The risk comes from heavy-handed corporates trying to hijack cultural platforms merely to flog goods, but commissions such as New Spring demonstrates another way—one that combines brand building with cultural clout.