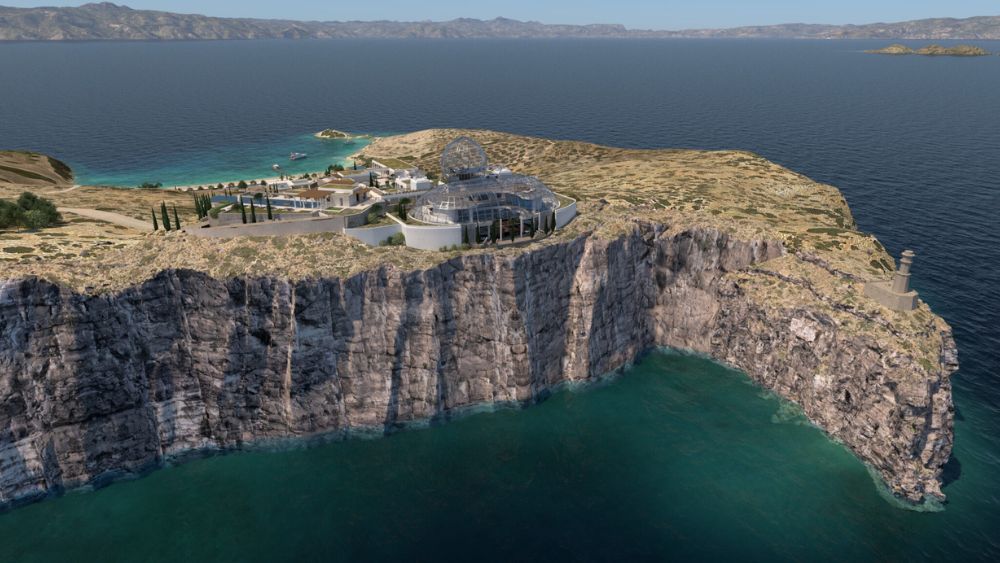 A private island in Greece has mysteriously popped up on Zillow, and if it looks familiar, that’s because it’s the abode of fictional tech mogul Miles Bron (Edward Norton)—and the setting of the new Knives Out sequel, Glass Onion.

The listing site has recently offered up a peek inside the Alpha Industries founder’s compound, which sits on 26 sprawling acres amidst the Peloponnese peninsula and overlooks the sparkling Aegean Sea. Or is it the Ionian? Altogether, Bron’s futuristic mega-manse features 29,000 square feet, 17 bedrooms, 22 bathrooms, a wine cellar, a spa and a single parking space that’s located on the roof. (Because you can’t drive a baby-blue Porsche on the island.) The crown jewel, of course, is a 65-foot-tall glass pavilion atop the main residence with a complex architecture meant to mimic the layers of an actual onion. Did we mention it’s also the ideal place to host a classic whodunit?

If you’re wondering just how much a billionaire like Bron would list his Grecian estate for, it looks like fans of the Knives Out franchise would have to shell out a whopping $450 million, according to Zillow. Although, if you put on your world-famous detective hat à la Benoit Blanc (Daniel Craig), a number of clues will tell you that the listing, which is said to be held by drifter and one-star broker Derol Zabinski, is fake. The fictional retreat post is actually part of a clever Netflix marketing campaign; the movie itself was filmed at Amanzoe Resort’s Villa 20, near Porto Heli.

Faux listing aside, the over-the-top enclave includes fun tidbits that let you immerse yourself in the Glass Onion storyline. Running entirely off of hydrogen fuel, Bron reportedly built the swanky island hideaway in 2020, presumably when he reached an infraction point in his career. The CEO’s compound is only accessible via boat and a transparent floating dock, which the hippie tech bro told his clan of disruptors he had designed by Banksy. However, don’t think of this as just some “rich asshole house,” as Bron describes it; it’s really more of a “commune for creativity.” And don’t pay any attention to the luggage-carrying robot dogs, either.

Among the Glass Onion’s accommodations are seven villas, each named after a different chakra. There are also six different pools for you to lay out next to, with plenty of Jared Leto’s hard kombucha to sip on. Or you could always hit the state-of-the-art gym for a virtual personal-training session with tennis legend Serena Williams. Elsewhere, large sculptures and lavish gardens dot the grounds. Just know that if you do decide to take a stroll, there’s no smoking allowed. Luckily, alarms have been installed to remind you.

Inside, the biotech entrepreneur’s eccentric abode is brimming with high-end artworks from Picasso and Monet to Mondrian, Francis Bacon and Lucian Freud. The most priceless of them all is Leonardo da Vinci’s Mona Lisa, which is supposedly on loan from the Louvre. Naturally, the sunken living room and massive dining area are “perfect for hosting the most elaborate of murder mystery parties,” notes the listing.

Looks like we can count this mystery solved—at least, until the next Knives Out flick hits the big screen.

You can see all the photos of The Glass Onion here or check out the trailer.

Free Gift With Purchase? These NYC Penthouses Come With a $50,000 Private Jet Voucher