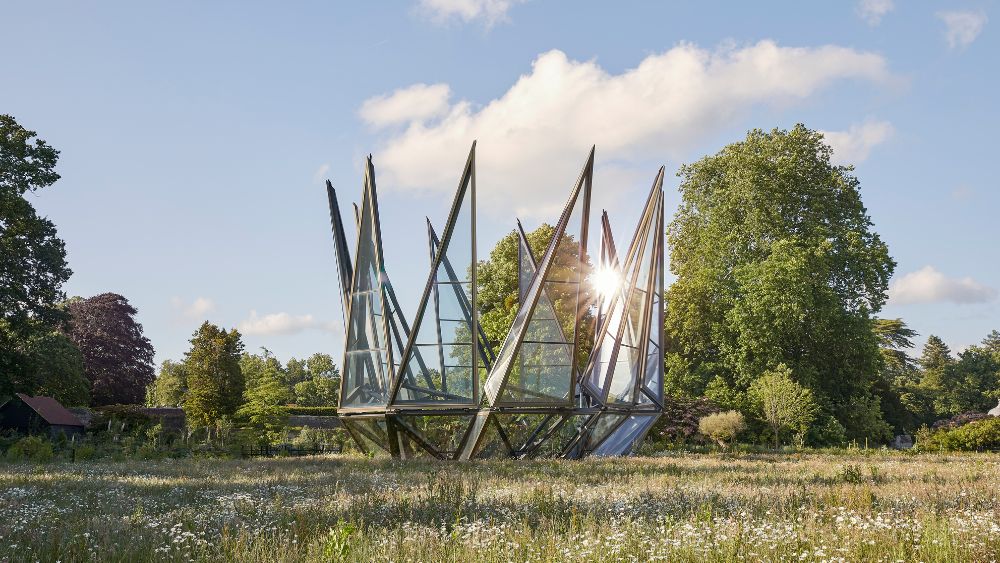 The horticultural haven that is Woolbeding Gardens in the UK just got a striking new addition—a glasshouse that “blooms.”

Designed by London-based Heatherwick Studio, the 10-sided structure is a new installment commissioned by the National Trust for Woolbeding Charity, according to Architectural Digest. The project, formally titled “Kinetic Glasshouse,” takes cues from Victorian ornamental terrariums. It was constructed to shelter a collection of rare, subtropical plant species and as an accompaniment to the property’s new Silk Route Garden.

“This is a place and a project that literally unfolds. You step through this bewitchingly beautiful garden and discover an object that starts like a jewel and ends like a crown, as the Glasshouse slowly unfurls,” says Thomas Heatherwick, designer and founder of Heatherwick Studio.

The 1,518-square-foot glasshouse is meant to resemble a flower opening its petals, hinting at the flora and fauna housed inside. Its transparent, pyramid-shaped façade is made from glass and aluminum. The “sepals” on the exterior are controlled via hydraulics.

In order to ensure the plants get proper sunlight and ventilation, the panes unfold entirely in just four minutes. In the colder months, they stay closed, and the structure acts as a functional, protective shelter.

The glasshouse unfurls itself in just four minutes  Hufton + Crow

Kinetic Glasshouse is the focal point along a 12-step path to the Silk Garden Route. The landscape is meant to be reminiscent of the key regions between Asia and Europe.

“This Heatherwick Glasshouse represents the cutting edge of technical design and engineering but it’s also a restoration of something that is part of Woolbeding’s history,” said Mark Woodruff of The Woolbeding Charity. “It stands as a crowning achievement in contemporary design.”

Woolbeding Gardens is open to visitors on Thursdays and Fridays from now until September 30.