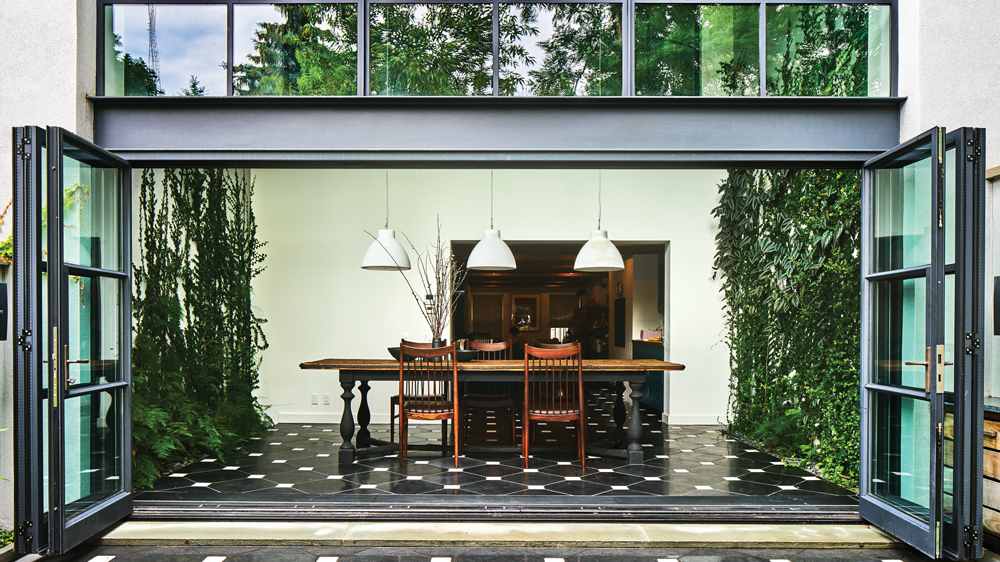 In the 1980s, French botanist Patrick Blanc modernized the concept of vertical gardens by creating vegetation systems affixed to walls. Since then, living walls have sprouted up in urban environments—particularly hotels and public spaces—bringing a burst of green to our concrete jungles. Increasingly, however, they are appearing in private homes—a bespoke addition that has many more benefits than just the aesthetic, as plants can also remove pollutants from the air and reduce stress levels. Though hundreds of plants and flowers can be used for living walls, factors such as climate, sun exposure, and client preference influence which ones landscape architects and designers choose for a given project. Each one allows homeowners to bring nature into their residences on their own terms—and doubles as a work of art.

Scott Hutcheon, the founder and lead designer of Laguna Beach, Calif.–based Seasons Landscaping, recreated an Andy Warhol painting with flowering kalanchoes alongside landscape specialists Lifescapes and has designed vibrant living walls for auto courtyards. One recent, 25-foot-long example in Palos Verdes made with the company’s Aqua Felt wall system features rows of succulents and asparagus. “We design plants for living walls so that there’s a lot of smell and color and texture but also size and volume difference,” says Hutcheon. “The coolness factor of green walls helps mitigate the urban heat island effect, and greenery consumes a lot of pollution.”

Brooklyn-based landscape architect Kim Hoyt created a more minimal look for a New York City townhouse. “I wanted a vine that climbed,” says Hoyt, who collaborated on the project with Elizabeth Roberts Architecture & Design and Michele Palladino of Gowanus Nursery. Ficus pumila is the dominant vine, and Asparagus setaceus and Cissus discolor serve as accents on the 16.5-foot dining room walls. “If you did the vertical wall system with all the pockets, you would have a presto landscape. But [these vines] grow on the wall, so it takes time.” Glass doors open to a garden with vine-covered stucco walls, continuing the theme from indoors to out.

Brenner used plants including ferns, touches of mint, sage, and lavender to create a vibrant nine-foot by 16-foot geotextile wall in the double-height entryway of another West Coast home. “It was designed to feel like something you might find in nature around a riparian zone, where land meets stream,” he says. “The client was inspired by the tranquility of natural springs cascading within a forest setting and wanted to bring that feeling into the home.” The fountain has its own pump and filtration system, and Brenner worked with the fountain expert to ensure the wall and water feature functioned as one cohesive piece. “Living walls feel like a garden,” he says. “It makes this evolving piece of art.”

When designing an exterior living wall for a West Coast home, David Brenner—the founding principal and lead designer of Habitat Horticulture in San Francisco, Calif.—envisioned a wavelike design that mirrored the ocean. “The wall wraps the corner, so the wave turns the corner,” Brenner says, “and the plants have this kind of movement when the wind hits.” The appropriate vegetation, hardy enough to thrive in a coastal environment (including Senecio serpens, Armeria maritima, and Geranium cantabrigiense), was chosen to adorn an 11.6-foot by 28.6-foot growing felt/geotextile wall made with recycled plastic water bottles. “To me, it’s an art form,” Brenner says of designing these vertical spaces. “I look at each installation as this kind of canvas that is always a conversation.”