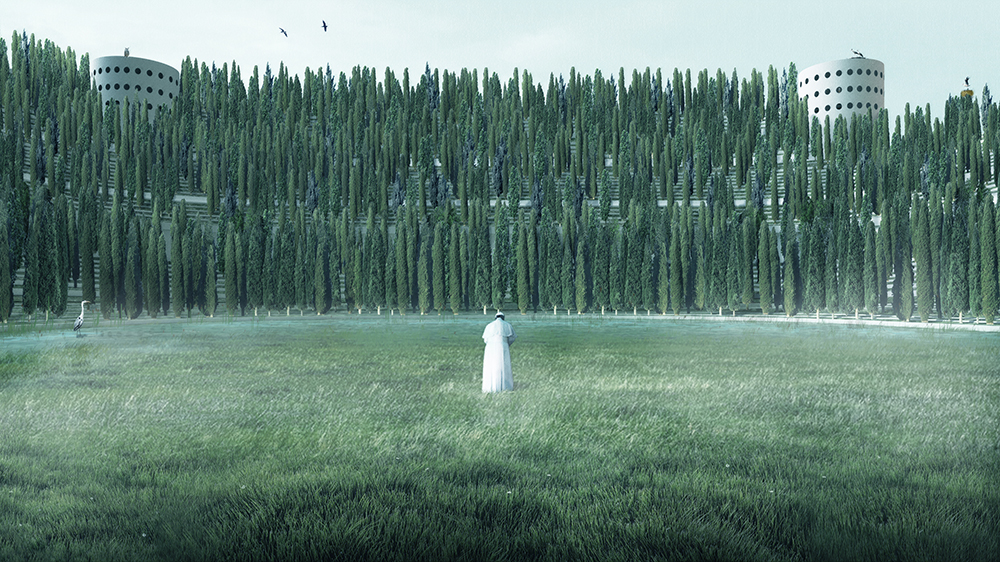 Angelo Renna thinks there are better things to do to Milan’s iconic San Siro stadium than tear it down. The Italian-born architect believes a better idea would be to fill the open-air arena with trees and turn it into a public memorial to those lost to Covid-19.

Despite plans to knock down the 94-year-old soccer stadium and build a new arena in its place, the Amsterdam-based architect hopes to use the space to pay tribute to the more than 35,000 Italians who have lost their lives since the outbreak began. His speculative proposal, dubbed Monumento per la Vita (or Monument for Life in English), would turn the arena’s terraces and grandstand into a giant green space peppered with 35,000 Italian Cypress trees.

Although the 80,000-seat stadium is easily one of the world’s most recognizable, its home clubs, AC Milan and FC Internazionale, have petitioned local authorities asking for permission to tear it down and build a modern 60,000-capacity venue in its place. The plan was recently given a big boost after the country’s heritage authorities recently declared that the arena has “no cultural interest and as such it is excluded from the protection provisions.” Although a final decision has yet to be made, the group’s report is viewed as an important step in the process.

But Renna hopes he can stop that from happening while at the same time helping find a way to remember the thousands of Italians who have lost their lives during such a painful period for the country. His plan to give the stadium a “second life” would involve removing its roof and seating and carving out large walkways throughout the stadium. As for the Italian Cypresses, Renna feels they’re an appropriate choice to fill the venue because in addition to being common in the region, they’re also a fixture of cemeteries and other sacred spaces.

An archival photograph of the San Siro  Courtesy Angelo Renna

“My proposal involves the transformation of the existing stadium into something completely different from its current use so that we can give this place a new identity—a second life,” Renna recently told Dezeen. “Maintaining the body by modifying its use. It may seem like a contrasting choice, but I personally see it more as an opportunity to create something unique and special for those people who have lost their beloved ones.”

Italy is one of the countries that has been hardest hit by the Covid-19 pandemic, and was the center of the initial outbreak in Europe. As of press time, the John Hopkins University’s Coronavirus Resource Center lists 243,967 confirmed cases in Italy, along with 35,028 deaths.