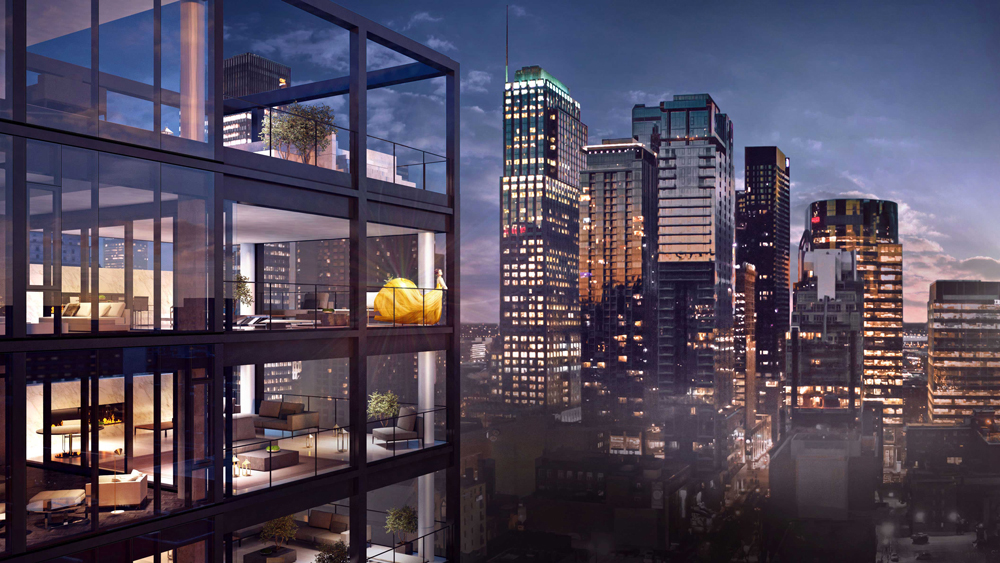 Through a 376-year-old backbone of French history and artistic spirit, Montreal has typically tilted more toward accessibility than luxury. The city’s opulence and grandiosity was limited to the Westmount neighborhood (technically a suburb) southwest of the city proper. A few pockets of 19th- and early-20th-century homes dotted other areas, but there was never enough substantive money to support a large-scale luxury scene.

The Brossard-based developer is building the new Four Seasons Hotel & Private Residences Montreal in the Golden Square Mile section of downtown as a prime example of reignited interest in the city’s once overlooked core.

Set to open this spring, 18 homes in the sky will open above the 169-room hotel that marks a return to Montreal for the brand 20 years after it left. The building as a whole marks a newer, more laid-back approach for Four Seasons, identified within the colors, tones, and styling of the project. Eleven residences have already been sold, with “significant interest” in three more. Pricing ranges from $3.5 million to $15 million CAD, with layouts from 3,500 square feet to 7,000 square feet.

Although the 106-year-old Ritz-Carlton Montreal lays claim to being the only Canadian hotel that’s kept the same name since day one (and is the first Ritz-Carlton in North America), the $250 million CAD Four Seasons opening illustrates that the sustained success of a property like the Ritz-Carlton unveils new opportunities for developers and builders throughout downtown.

It’s certainly cautious optimism as this nascent market is just beginning to lay a foundation for a thriving luxury sector.

“Before 2016, it was rare to see anything selling above $3 million CAD,” says Susan Lloyd Leduc of Profusion Realty (a Christie’s affiliate). “Since then, the price point has gone up. Last year, there were more than 20 places on the MLS system that sold above that price.”

Perhaps more interesting is that unlike Vancouver, which saw incredible Asian investment drive up prices to record levels, much of this high-level interest within Montreal is from Quebecois.

“Ninety percent of our residents are locals,” says Ruscandra Calin, director of residences at the Ritz-Carlton Residences Montréal, noting that particular statistic is exceptional and unique across the company’s residential lineup.

Traditional single-family condos and homes in the central core are also seeing increased interest and price jumps. For example, a five-story condo in the Vieux Port (Old Port) was a custom creation by a wealthy Canadian CEO on the top floors of a building in a quiet corner of the bustling tourist area. Lloyd Leduc, who is representing the property, says that it’s attracting everyone from middle-aged couples to high-net-worth individuals, all predominantly local.

Although the home is more than a decade old (taking several years to complete), it’s a remarkable example of the exceptional value that’s still alive and well in Montreal. An asking price of $7.3 million CAD ($5.5 million USD) gets you 17,000 square feet of living space, private terraces and wine cellars, and a special office with floor-to-ceiling windows overlooking the St. Lawrence River. The same setup in Vancouver would easily cost three times that, which means the market still has plenty of room to expand.

That expansion is trickling in. General home prices were up more than 4 percent in 2018 in a trend that should continue, especially with inventory pacing demand.

As one of North America’s most captivating and historical cities, Montreal represents an intriguing second-home or investment destination for those sticker-shocked by what’s happening elsewhere on the continent. “The reason why people weren’t buying before was because there just weren’t many luxury offerings,” Zagury says. Those offerings are here now. And if current conditions are any indicator, plenty more will follow.