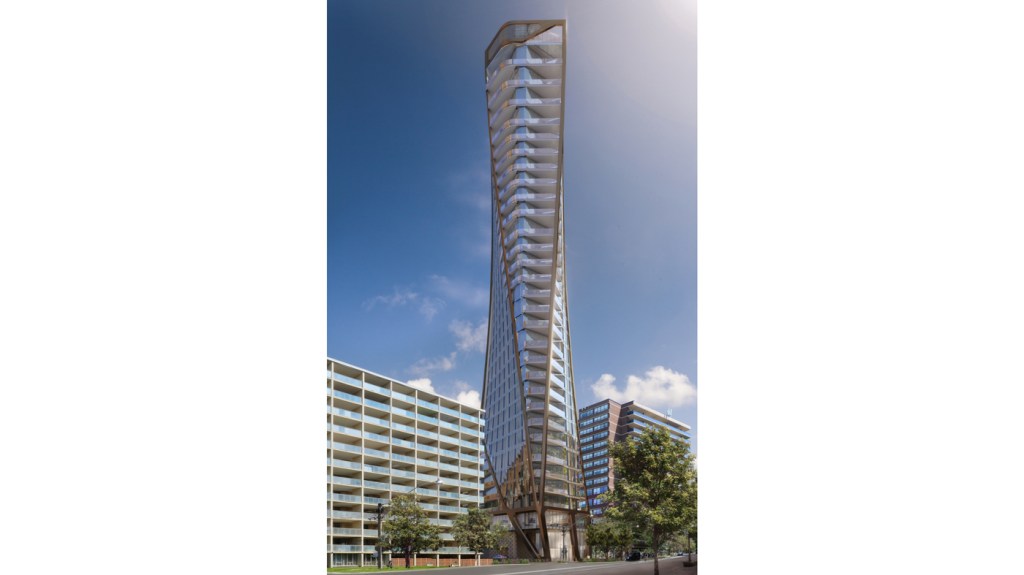 Adi Development Group has tapped New York–based architecture firm CetraRuddy—the team behind projects such as One Madison and 443 Greenwich—to design a luxury residential tower in Toronto. Initial plans for the 60-unit tower, which is CetraRuddy’s first project in Canada, reveal a sculptural steel structure with balconies that seem to cascade down the 29-story building.

“Toronto has emerged as a major player on the international scene,” says Tariq Adi, CEO of Adi Development Group (who runs the company with this brother, Saud Adi, COO). “Not only do we have a strong and stable economy that is attractive to foreign buyers looking to invest, but Toronto itself is consistently ranked as one of the world’s most livable cities, year after year. Home to a diverse population, it is a truly global epicenter for business, finance, arts, and culture that knows how to integrate new and old luxury.”

The current design calls for a maximum of four units per floor on the lower levels to guarantee privacy, with one unit per story for the top two penthouse floors. The majority of the one- to three-bedroom homes will offer more than 1,900 square feet of living space. Amenity spaces, including an outdoor terrace, indoor swimming pool, fitness center, and spa, are also in the blueprints.

RobbReport.com recently sat down with John Cetra, one of the founding principals at CetraRuddy, to discuss his firm’s vision for the project.

How did your work in New York City prepare you to work on your first project in Toronto?

Our experience in New York City prepared us for our project in Toronto in many ways: Firstly, through our experience with high-rise residential towers, we have addressed the programmatic issues of living vertically, creating diversity of unit types, open spaces, and shared communal spaces. At One Madison in New York, for example, the stacking of units is reflected in the building’s form. It is important for us to create places and spaces where our residents will feel at home and visitors will find welcoming. The approach to the building must be inviting but also feel secure. It should be private but also visible at the same time. Apartments and rooms within them are planned to allow multiple views and orientation to the sun.

We have been very sensitive to how tall buildings impact the open spaces around them. We feel that taller, more slender towers minimize shading impact on surrounding areas. Our project One Madison is adjacent to Madison Park. The shadow of the tower moves very quickly over certain parts of the park, as opposed to lower buildings that permanently create shade around them.

What materials will be used for the project?

The tower façade is designed to be a unitized-curtain-wall system comprised of bronze-tinted glass and shadowbox slab covers to maintain continuity of the façade. Vertical bands of ventilation panels are metal—dark-finished to accent the glass surface. The opaque panel articulation is a textured metal—bronze-colored to complement the bronzed glass.

The façade continues down to the base where additional materials are incorporated to frame the entry porte cochère and add detail to the street level. Treated wood, porcelain panel, and stone accents are composed to enhance the entry sequence.

What are some of the similarities and differences between real estate projects in New York City and Toronto?

Although Toronto is known to be colder in winter, there are similarities in temperature and humidity. Regarding methods of construction, there also seems to be more in common with the two cities than differences. In both cities, environmental requirements are designed around maximizing indoor comfort in the most sustainable way. But the planning processes are different.

In New York City, the zoning regulations are very specific, and variances to those regulations, while possible, are very time-consuming to pursue, so many developers will choose to stick with the rules. There seems to be more flexibility in Toronto, but since we are just in the beginning stages of the process, we’ll see if my perception is correct. We have been very fortunate to have worked with some of the most creative developers in New York City, and we are excited to work with Adi.